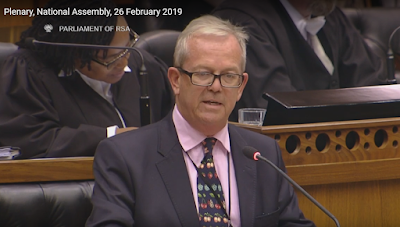 Yesterday our portfolio committee met to consider the report on the motion of undesirability of my Small Enterprises Ombud Service Bill.

At our last meeting of 2018, we had a long discussion about whether the DA, in my name, could submit a separate minority report and we eventually agreed that it would, instead, be included in the main report.

The committee therefore adopted the report unanimously and it was announced in today's ATC - see pics. We should have an opportunity to present it to the National Assembly before the Fifth Parliament rises on 20th March. 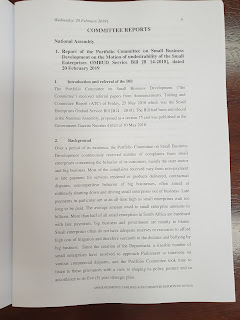 You can read my minority report after the main report below. This is one of the first times the DA has succeeded in getting a minority report incorporated into a committee report. My colleagues Manny de Freitas and Chris Hunsinger are taking the Transport Committee to court to force it to include their minority report on the Road Accident Benefit Scheme Bill into its main report. It is an excellent piece of work and congratulations go particularly to Chris for this.

REPORT OF THE PORTFOLIO COMMITTEE ON SMALL BUSINESS DEVELOPMENT ON THE MOTION OF UNDESIRABILITY OF THE SMALL ENTERPRISES OMBUD SERVICE BILL [B 14-2018], dated 24 October 2018

1.         Introduction and referral of the Bill
The Portfolio Committee on Small Business Development (“the Committee”) received referral papers from Announcements, Tabling and Committee Report (ATC) of Friday, 25 May 2018 which was the Small Enterprises Ombud Service Bill [B14 – 2018]. The Bill had been introduced in the National Assembly, proposed as a section 75 and was published in the Government Gazette Number 41623 of 10 May 2018.

Inside Out Perspective: talk on SA's economy and job creation 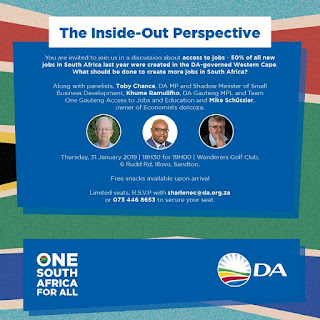 Last Thursday evening I shared a platform at the Wanderers golf club with economist Mike Schussler and DA colleague Khume Ramulifho on the topic of jobs. The event was the second in a series organised by Dalu Cele, a councillor in the City of Joburg, aimed at giving the public perspectives on current issues from the outside (a guest speaker) and inside (two DA public representatives).

You can read my speech below.

Good evening ladies and gentlemen, it’s a pleasure to see you all here at the second Inside Out event organised by my colleagues Dalu Cele and Nicci Rahn.

I want to begin by offering a few thoughts on where political philosophy and ideology fit into our discourse on the economy and job creation.

Political philosophy and ideology have become very unfashionable words in South Africa. They have been supplanted by words such as vision, mission and brand identity, in a world where spin doctors like Lynton Crosby and faceless officials have come to dominate our language. 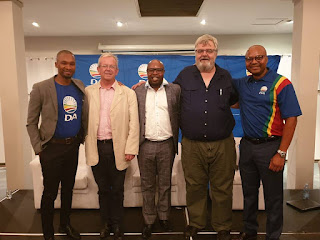 But we need to understand the political philosophies that underlie the main actors in South Africa’s polity to understand how economic policies flowing from them impact our daily lives.

The ANC, in government for close on 25 years, is fundamentally a socialist party with leanings towards Marxist Leninism.

This dates to the Freedom Charter but has greater expression in the National Democratic Revolution which is the driving force of ANC ideology. In the NDR, the state is the main actor in society and the economy.

Today's edition of Business Live published my opinion piece which sums up why the Department of Small Business Development has failed SA.

You can read it here or the text version below.


These pages have carried a running commentary on the performance of the Department of Small Business Development since its proclamation in July 2014. Heralded by special interest groups as an overdue and bold move to boost government procurement from black-owned SMEs, derided by anti-interventionist types as evidence of more government bloat, it has been a punching bag in our politico-economic dialogue ever since.

Most recently, special advisor to Minister Lindiwe Zulu, Thami Mazwai, (“A mischievous attack”, 31st January) rebutted a call by the Small Business’s Initiative’s Bernard Swanepoel to do away with the department and said Parliament’s portfolio committee “have not questioned the need for the department”. Only the ANC members support its continued existence, with most opposition MPs including the DA calling for its closure.
Read more »
Posted by Toby Chance at 04:06 No comments: