A tale of two festivals 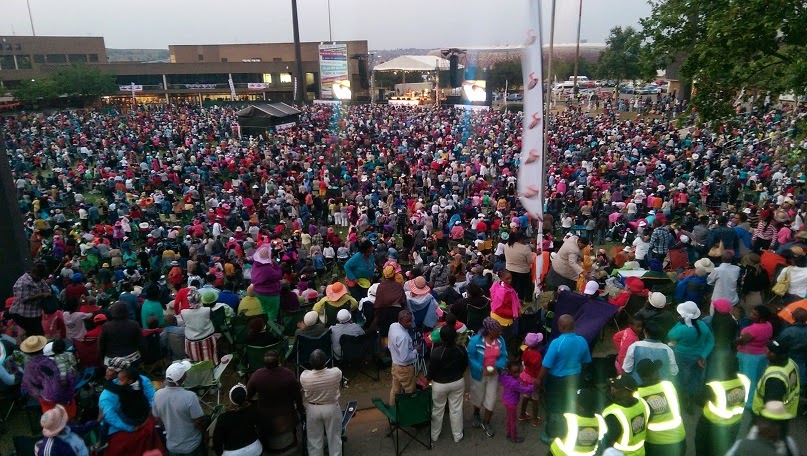 This weekend the annual Soweto Festival Expo once again provided an opportunity for small businesses from Soweto and Gauteng to sell their wares, network, and contribute to job creation and economic growth in South Africa. The three day event also showcased hundreds of musicians and performing artists, all contributing to the creative economy of Gauteng.


This same weekend the City of Tshwane was due to host the Tribe One Festival, purportedly at a cost of R65 million. It was cancelled at the last minute, amidst accusations and counter accusations by the City and the event organisers.
The budget for the Soweto Festival Expo is less than a tenth of the Tribe One Festival’s. A bigger mismatch of expenditure versus value creation would be hard to find. This is a typical example of government’s obsession with trophy events with big names at the expense of events that make a measurable impact on the communities they are meant to serve.
The Minister of Small Business Development, Lindiwe Zulu,  and I visited the Soweto Festival Expo yesterday. We spent an hour and a half walking through the various activities, including an exhibition of around 100 small businesses sponsored by the Gauteng Enterprise Propeller (GEP).

(Note: GEP apparently insisted on sourcing and managing the SME exhibitors this year. 30% of the stands were empty, which is a disgrace. In previous years when ALP did this job the no-show rate was less than 5%. Just another illustration of how government agencies are failing their stakeholders. It plays into one my recommendations made at Friday's Portfolio Committee on SBD strategy workshop, that government must outsource as much as possible to the private sector who are better incentivised to get this sort of work done.)

The organisers, Adele Lucas Promotions, ALP, believe the event can act as a model for developing small businesses, which can be proliferated into all communities in South Africa.


By  contrast to the Tribe One Festival, which has no long-term benefit to the community, the Soweto Festival Expo has an entirely beneficial and developmental goal. It has its roots in the Soweto Homemakers Festival, first staged in 1983 to mark the introduction of the 99 year leasehold legislation enabling black South Africans to own property for the first time. A joint venture between the Soweto Chamber of Commerce and ALP, it was ground-breaking: the first event of its kind ever held in a township.

it went into hibernation: Soweto was not an easy place to do business in those days. But in 2005 it was revived and I joined the management team to run it.


The Soweto Festival Expo epitomises the best and the worst in relations between the private sector and government in South Africa. One day I will tell this story in full, but for now I will simply say the event's huge potential has been thwarted by the political cowardice of City of Johannesburg politicians and officials, the greed and incompetence of self-appointed representatives of the Soweto business community, and the indifference of government generally towards private sector efforts to stimulate opportunities for small businesses.

In 2011 the Deputy Minister of Trade and Industry, Elizabeth Thabethe, was the senior government representative present at the official opening. In her speech she repeated the department’s commitment to supporting small businesses, though then and in subsequent years the DTI was deaf to our appeals to match her words with deeds.


Hence my call to Minister Zulu to look afresh at this event, and others of its kind, as a way to support small businesses in one of their most important needs: providing access to markets. Had Elizabeth Thabethe, now her Deputy Minister, heeded our calls, I would perhaps found it unnecessary to voice my concerns now.


Most small businesses in townships never break out of the narrow confines of their local market. This constricts their growth and renders them bit-players in the wider economy. Only once they break into the supply chains of major retailers and other companies in the formal sector will township businesses emerge from the shadows and play a meaningful role in tranforming our economy.


Events such as the Soweto Festival Expo can change this pattern of exclusion. By setting small businesses side by side with larger exhibitors from government and the corporate sector, the small business owners learn valuable lessons and make contacts, enabling them to expand. The training provided pre and post the expo equips them with vital skills in sales, marketing, finance and operations.


One of South Africa’s most passionate exponents of events and expos as a vehicle for small business and local economic development is Janet Landy. Her Skills Village in Bez Valley, Johannesburg, trains hundreds of people involved in every aspect of event management and production. Her vision is for all municipalities and eventually all wards in South Africa to have a cooperative able to stage an event. Supported by government and big business, these could create a veritable army of micro businesses supplying everything from catering, décor and sound equipment, to staging, security and event management services.


The Department of Small Business Development might soon have the word Cooperatives added to it. Cooperatives have been a manifest failure in South Africa, but Janet Landy’s approach could change this in a sector – event management – which can create large numbers of jobs where they are needed most – townships, rural and peri-urban areas.


Like me, Janet has been banging her head against the brick wall of government for years, appealing for help and a willing ear. So far with no response.


I am optimistic Minister Zulu’s visit to the Soweto Festival Expo yesterday will break down that wall and usher in a new, refreshing approach which recognises the role events and expos have in driving small business development. This will be a clarion call for businesses in the formal sector to direct their enterprise development funding this way, adding further impetus to the development of small businesses.


The Tribe One Festival, and the exorbitant amounts spent on it, makes my blood boil, when events like the Soweto Festival Expo struggle to source funding from government. The ANC must get its priorities right: less spending on trophy events, more on events which have a lasting and measurable impact on local communities.


Soon after her appointment, Minister Zulu mentioned in an interview the lessons she learned from her grand mother, a hawker in Soweto. With the leg-up provided by expos such as the Soweto Festival Expo, the hawkers of today could become the job creators of tomorrow. Events such as the Tribe One Festival, by contrast, simply stroke the egos of their government funders.
Posted by Toby Chance at 01:43