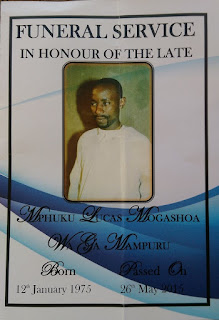 This morning I attended Lucas Mogashoa's funeral in Soweto. It was a very moving occasion - actually two, for first there was the service then the burial.

Lucas was employed as the Constituency Officer in the DA's Mvelaphanda constituency, formerly known as Soweto North. It adjoins my own constituency, Soweto West. He died of a stroke last week, aged only 40, leaving three daughters and two sons.

He was born and spent his early years in Naledi. In the funeral leaflet, a brief Story of My life recounts how "I attended preparatory school in Naledi Day Care, because I was too smart. I started school at the age of 4 in 1980 at Lethabo Combined School, when I was 7 years old my teacher took me to a radio station as I was always a good speaker."


After a spell in PR and journalism he joined the DA, to the great surprise of his family it seems, judging by the comments of an aunt who spoke at the funeral service. He was an outspoken individual, some would say arrogant, but he was passionate about the DA and turning Soweto blue. He was a very hard worker and apparently had 48 days leave due to him - perhaps overwork contributed to his stroke. 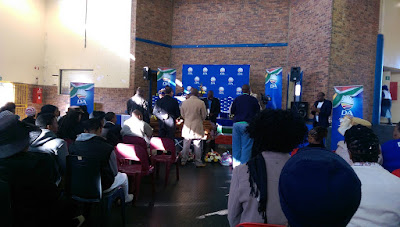 The DA leadership showed up in force, with Gauteng Leader John Moodey, Chairperson Solly Msimanga both taking to the stage alongside Khume Ramulifho, Joburg Regional Chair and Lucas' Constituency Head. My Constituency Chair, Makatisane Papo, was the MC, while another of my PR councillors, Given Mogane, the DA Deputy Chief Whip in the Joburg caucus, gave the sermon.

My constituency was well represented, with Deputy Chairperson Lovedalia Rampolokeng and another PR councillor Richard Dawes coming along, as well as my Constituency Officer, Phindo Sibisi. Lucas lived in Naledi so it fell to Lovedalia and Phindo to organise and decorate the venue, which they did very well, with DA regalia all over the place. They arranged taxis and buses from far and wide and half an hour after the appointed start time nearly all the chairs were taken, over 200 people I'd say.

Most of the service, which lasted for an hour and a half, was in African languages so the messages were lost on me, but it wasn't hard to get into the spirit of the occasion, especially when the singing spontaneously started and people started ululating.

One oddity is that Lucas was a member of Hare Krishna and posters of him in Krishna clothing were everywhere, including the front page of the funeral leaflet. I gathered there were some disagreements within the family about the nature of his funeral, but I didn't see a single Krishan support anywhere. Usually Krishnans are cremated but this seems to be have been overlooked by the family and his executors, whoever they were.  I am not sure if he had a will but I hope his wishes were respected. 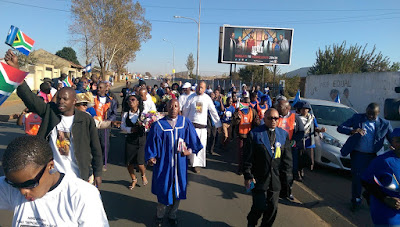 After the service I was asked to be one of the pall-bearers who took his coffin into the street where it formed the centrepiece of a DA rally, with activists and family members crowding round before the coffin was placed in the hearse for the drive to Avallon cemetery. Passers-by looked on in surprise, as this sea of blue danced and sang its way along the street. There was a palpable sense among all of us that Soweto, once a no-go area for the DA, is ready for political change. 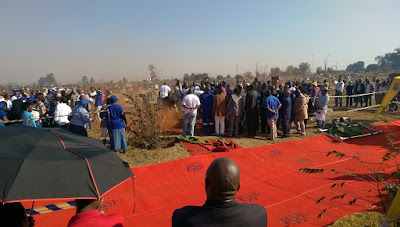 Avolon must be one of the biggest cemeteries in the world - it goes on for miles, and on any given weekend there are hundreds of burials there. It was opened in 1972 exclusively for blacks.This was the second time I've been there in as many weeks - last time it was to bury the father of the acting chair of one of my  branches. 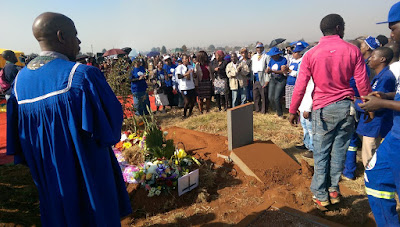 The area in front of the grave was decked out with yellow gazebos where the family sat, with carpets leading to the grave itself. The priest performed a short ceremony before the coffin was lowered by a clever machine into the grave. There were more prayers then the men lined up to shovel the earth back into the grave. John Moody gave the final short eulogy to Lucas before handing a DA flag to the family by way of a tribute. The burial ended with a group of DA supporters singing DA election and anti-Jacob Zuma chants around the mound of earth piled with bouquets. So we said goodbye to a true son of the DA.
Posted by Toby Chance at 04:04