Speaking to business owners in Jabulani with Herman Mashaba 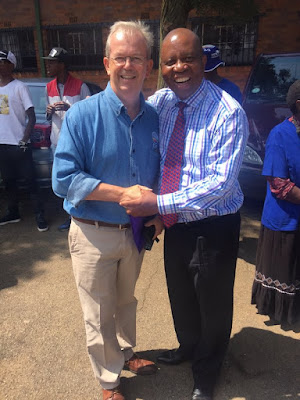 Yesterday Herman Mashaba, DA mayoral candidate for Johannesburg, was the guest speaker at an event organised by my Soweto West constituency in Jabulani. The focus was how the DA would assist businesses in Soweto and other townships gain access to the mainstream economy.

Herman was inspiring and received a warm welcome from the roughly 125 members of the audience.

It was great to see representatives from business associations such as The Entrepreneur Network, the Chamber of Business Associations and the Orlando East Business Forum present, as well as the Centre for Development Enterprise, Small Business Project, Seed Academy and other organisations with an interest in support for small business.

Before he left Herman drew the lucky winners of prizes donated by Seed Academy and the SA Professional Network Association. We also had impassioned speeches by founder of PhindiK shoes, Tshepo Kgaudi, and Pam Green, founder of Second Chances NGO, both of whom got a standing ovation.

Below are the main points i made in my speech which preceded Herman's, as well as some of the things bothering SMEs in Soweto and what we would do about them once elected to govern the City of Joburg. 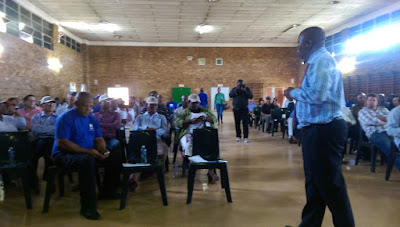 South Africa’s economy is not growing fast enough – estimates are it will grow less than 1% in 2016.

Unemployment is at its highest since 2004 and growing. 1,7 million more people don’t have a job compared to 2009 when Jacob Zuma became president.

The National Development Plan expects 90% of the 11 million jobs the economy needs by 2030 to come from small and medium enterprises but this is not happening – instead, small businesses are struggling amidst a tough economic environment.

The Small Business Development ministry has been a grave disappointment – it has inherited a lot of under-performing staff and programmes from the DTI and EDD and has had minimal impact. It is not co-ordinating small business support across local and provincial government which means there is still much duplication and wastage of resources and manpower.

The Department claims its budget is too small to effect real change but a strategic review by Sizwe Ntsaluba Gobodo released in November suggests up to 30% of its budget is wasted on non-performing programmes.

Minister off Small Business Development Lindiwe Zulu spent R689 000 on a trip to the UK and France in October – imagine that money instead being spent on helping small businesses in Soweto buy equipment to become competitive. This is hardly the behaviour of a responsible minister concerned about her department delivering on her promise.

Soweto accounts for 30% of Joburg’s population but only 4% of its economic output – it is still largely a dormitory town with some gleaming shopping malls but little in the way of productive investment.

R1 spent in Soweto circulates less than two times, in Sandton it’s eleven times: this means that not enough of the money earned by Sowetans is spent in Soweto. This has to change if the people of Soweto are to emerge from decades of isolation and economic exclusion.

Government has focused too much on supporting and re-zoning for consumption investment (retail) and not enough on production (industry, services, offices): chasing votes rather than providing economic opportunities for businesses to thrive.

Jabulani Mall is great for shoppers, but what about the Jabulani Office Park? It’s been in the pipeline for many years and the developers have still hardly broken ground.

Government efforts to stimulate Soweto’s economy have largely failed – the Soweto Empowerment Zone in Diepkloof is a white elephant since it was conceived in the early 2000s and is now a largely ineffective business incubator run be SEDA. Next door, the recently opened Gauteng Innovation Hub satellite office in is dormant, hardly a shining beacon of Soweto innovation.

Truly innovative projects like the Soweto Arts and Crafts Fair at Jabulani theatre has had its application for funding turned down every year since it was formed in 2011. This is very dispiriting to the young entrepreneurs who only want the best for their community.\

The ANC government’s Gauteng Township Economy Revitalisation Programme is too little too late. It was announced to much fanfare in October 2014 at Orlando Stadium and supposedly R100 million has been budgeted but there is little sign of it where it matters.

The township industrial parks in Pennyville, Emdeni and Orlando West are languishing after three decades of under-investment. Promises of the parks ownership being transferred to the tenants have not been honoured and negotiations are painfully slow. Overcrowding, poor infrastructure and dilapidated buildings are hardly a sign of a government intent on making Soweto an industrial hub of Johannesburg

Meanwhile, Soweto remains excluded from Johannesburg’s mainstream economy and businesses in Soweto are dealing with significant barriers to entry. They cannot get onto the first rung of the economic ladders.

Is this surprising when the ANC refers to big business as “White Monopoly Capital” – the DA prefers to see big business as potential customers for small business. Who are they more likely to listen to?

Jozi@Work target was R3 billion procurement spend with COJ, will be lucky if it reaches R1 billion in 2016. The application process is time-consuming and cumbersome and communication with applicants is inadequate, leaving many applicants hanging in the air.

There is much talk about the tourist boom in Soweto. The trouble is, tourists come in on buses and taxis in the morning and leave in the afternoon: they don’t stay the night. There are not enough tourist-friendly entertainment or leisure opportunities in Soweto and the B&Bs are too small to accommodate tour groups. What is the City or Joburg Tourism doing about this?

There is too much emphasis on Vilakazi St and the Hector Petersen Museum. What about re-furbishing the Credo Mutwa centre, and why has it taken so long for the Jabulani Amphitheatre to be re-built?

ANC has little experience in business and is more interested in distributing wealth than growing the economic cake – the Freedom Charter said nothing about creating new riches, only about sharing the existing wealth. This does nothing to encourage a culture of entrepreneurship and innovation.

The DA is the party of enterprise, opportunity and wealth creation – bringing small and big business together for the betterment of all

Where the DA governs, joblessness is coming down. Cape Town is the least unequal metro in South Africa and has the highest rate of start-up businesses.  Cape Town Metro has identified over 300 locations for informal traders where they are not hassled and trade with permits

What will the DA do to address these problems?

The DA policy on small business is primarily aimed at creating an environment in which it is attractive and easy to start and grow a business. Our key proposals with regard to small business development include:

·         Provide title deeds to occupants of COJ buildings. Occupants of premises owned by the COJ will be qualify for the title deeds to these premises, subject to certain conditions, enabling them security of tenure and providing equity and collateral for obtaining finance/loans
·         Reduce regulatory burdens for small businesses. An urgent review of the full regulatory burden on small enterprises in South Africa (including registration requirements, taxes, labour regulations and empowerment frameworks) and investigations into how these processes can be streamlined.
·         Introduce incentives for businesses in the mainstream economy to open supply chains. Medium to large businesses make it hard for newcomers to enter their supply chains. Barriers to entry will be lowered by introducing incentives for companies to contract from small businesses who create employment
·         Provide opportunity centres that will promote easier access to business loans and simplify processes to apply for local government tenders, like Jozi at work

·         Provide entrepreneurial training and ongoing mentorship, through cooperatives and franchises.

·         Conduct a thorough audit of city-owned land and buildings, in an effort to identify properties that could provide cheap accommodation for small businesses.

·         Targeted support for micro-entrepreneurs and informal traders. Foster and support the job creation potential of the informal economy by:
o   developing a Code of Good Practice on engagement with informal traders;
o   initiating a comprehensive survey of the informal sector that can be used by an interdepartmental task team to develop support strategies;
o   Revolutionise the smartcard system to not only be a manner of identifying legal traders but allow it to be used to access, training, cheaper bulk buying.
o   adjusting the legal and regulatory framework to accommodate those in the informal economy;
o   providing safe trading spaces for informal entrepreneurs;
o   e-registration for informal trading permits;
o   removing the incentives to remain outside the formal economy by making it easier to start and grow a small business;
o   promoting awareness of the tax amnesty for small businesses;
o   encouraging government procurement of goods and services from small business entities and ensuring that micro-entrepreneurs are made aware of these opportunities.
·         Address bylaws that inhibit entrepreneurial spirit and make sure others that are needed are strictly enforced

·         Redesign Metro Taxi Precincts into vibrant shopping and service areas which address tenant mix and commuter flows.  Also allow taxi associations to establish their own tyre fitment centres, workshops and fuel garages. In doing so, you recognise and reward the taxi fraternity for the fact that they are bringing the commuter and intern economy to these precincts

·         Turnaround Metro trading areas through a bottom up approach. Firstly identifying specific tenants needs before creating trading areas that are either too small or inappropriate. Again address tenant mix. We can't have everybody selling exactly the same goods all lined up next to one another
·         Awareness programmes on support available to small business owners
Using all available information channels, including government web portals, one-stop support centres, SMS campaigns and interaction with representative bodies to promote awareness and increase take-up of small business support initiatives.