Britain back in election mode

Diana and I often pick momentous days in British history to travel in or out of the country.

On 7th July 2005 I got off the plane and soon heard reports of the terrible bombings of the London underground and buses that happened that very morning. On 8th April 2013 we turned on the radio as we drove from my parents' home in North Wales to Heathrow and sat riveted for the next five hours as reports of Mrs Thatcher's death came through, along with in-depth interviews with significant politicians of her era including Michael Heseltine (who triggered her resignation as Prime Minister in 1990) and David Owen (Foreign Secretary in the Labour government she defeated in 1979 who went on to co-found the SDP which re-shaped the centre left of British politics).

Today, once again driving from North Wales to Heathrow, we turned on the 10:30 news to hear that Theresa May has called a general election for 8th June, just 7 weeks away. The special edition of The World at One on BBC Radio 4 carried interviews with leading political commentators and politicians offering their views on this shock announcement. 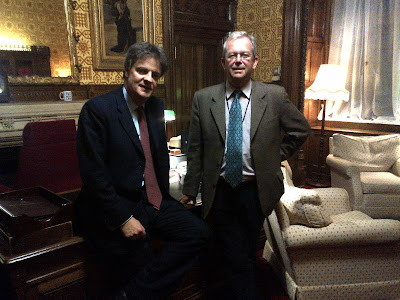 Prominent among them was Lord Jonathan Hill, former UK Commissioner to the EU, Leader of the House of Lords and British cabinet minister. In his view, it was sensible for Mrs May to call the election. As he recalled, when serving in Number 10 Downing St as John Major's Political Secretary in the months after the signing of the 1992 Maastricht Treaty, a wafer thin Tory majority in Parliament can lead to instability in government, particularly when the most serious opposition comes from rebels in your own party.

Such a state of affairs when Britain is about to enter its most crucial negotiations in two generations is hardly desirable. Jonathan and I have been friends since our Cambridge student days. He hosted Diana and me for dinner in the Lords in 2014 not long after his elevation to Leader and just three months before I was elected a South African MP. The photo above is of the two of us in his office. Jonathan, in a principled move, resigned as Commissioner two days after the Brexit result but his proximity to the nexus of power means his views carry weight.

David Davies, Minister for Brexit, carried the official government line that Mrs May had given in Downing Street after this morning's decisive Cabinet meeting. The Conservatives wanted a clear mandate from the British people to negotiate for all the people, not just those who voted for Brexit.

Said May in her statement:


“After the country voted to leave the EU, Britain needed certainty, stability and strong leadership. Since I became prime minister the government has delivered precisely that.”

This is no general election, it’s a coup – MPs have a duty to stop Theresa May | Anne Perkins

Read more
“The country is coming together but Westminster is not. Labour have threatened to vote against the final agreement we reach. The Lib Dems have said they want to grind the business of government to a standstill. Unelected members of the House of Lords have vowed to fight us every step of the way.”
A useful annotated version of her statement appears on The Guardian online here.

Labour Leader Jeremy Corbyn welcomed the decision, though the latest polls put Labour twenty points behind the Tories - their lowest since 1983 when Thatcher won a landslide in the Falklands war afterglow.

The Lib Dems are keen to fight another election, which they believe should increase their seats from the miserable eight they currently occupy. Scottish Nationalist Party leader Nicola Sturgeon predictably trashed the decision - they won all but three Scottish seats in the 2015 general election and can only go down from there. Sentiment is wavering in Scotland towards a second referendum on Scotland's leaving the UK and I believe May's calculations factored the likelihood of some SNP seats falling to the Tories, even though Scotland was overwhelmingly pro-Remain.

Scot and former Cabinet Minister Michael Gove, who challenged Theresa May to the Tory leadership after David Cameron resigned and lost badly, said Theresa May was in an impregnable position as leader both of her party and the country. The interviewer, pointing out this very fact, questioned the need for an election but Gove side-stepped the issue of internal troubles in the party contributing to her decision.

Taking up this theme, perhaps the most intriguing interpretation of the news came from the BBC's political editor Laura Kuenssberg who said Mrs May was fearful of possible negative public opinion going into what before this morning had been the legislated date for the next election, May 7th 2020. After May triggered Brexit last month the mood coming out of Europe has been tougher towards Britain than expected. Two years of negotiations could lead to the worst of both worlds for the Tories - a watered down Brexit which satisfies neither the Hard Brexiteers of her own party and the Remainers on the Opposition benches who will use this to bolster their positions going into the election that Britain is worse off under the Tories.

By calling an election now, with the expectation of a bigger majority, Mrs May has calculated her position will be strengthened both in the Brexit negotiations and on other important policies such as reforms to education and health. She will also have until June 2022 until the next election, giving her two extra years to finalise Brexit and with the chance of positive bilateral trade negotiations under her belt.

Tomorrow the Prime Minister will table a motion to repeal the Fixed-term Parliament Act of 2011 which legislated elections every five years instead of the tradition allowing a Prime Minister to call one any time after informing the monarch of her decision. If she wins the required two thirds majority Parliament will be dissolved and MPs with return to their constituencies for seven weeks of electioneering.

What fun it will be to watch from the sidelines!
Posted by Toby Chance at 09:20