Step up 2 a Start up 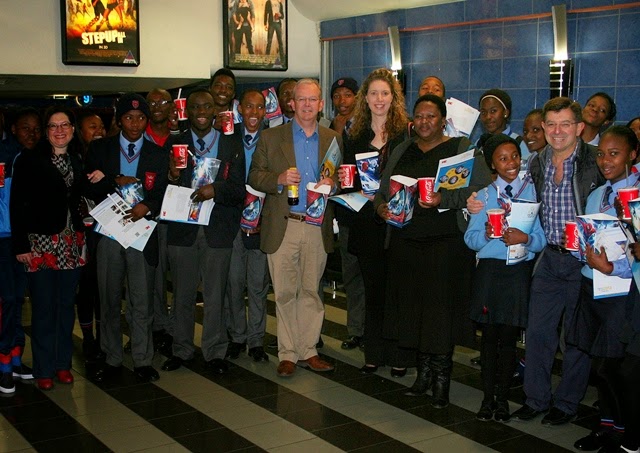 Yesterday I made an early start to the day and drove to Eastgate Mall to attend an inspiring viewing of the new film produced for Primestars' innovative Step up 2 a Start up entrepreneurship programme. Devised by the irrepressible Martin Sweet, the programme is aimed at inculcating a culture of entrepreneurship among grades 10, 11 and 12 learners as they prepare for the world of work.

Martin and I go back years and last week I just happened to be paging through a copy of the Daily Sun and saw an article about the recent launch of the programme so I called to congratulate him. He said the launch went very well, though the Minister of Small Business Development did not show up which was disappointing (why do ANC bigwigs make a habit of this?). He invited me to Eastgate where up to 300 learners were due to see the film and commence the programme. Fortunately this did not clash with my usual Sunday morning church service for St George's Parktown, where I sing in the choir, has evensong on the first Sunday of every month.

Along with Martin I met the representatives from 3M, one of the sponsors of the programme, and Gearhouse, who handle the technicalities for Primestars' live events. They were both very excited to be part of the initiative. Then along came Jabu Stone, who owns a business of the same name supplying hair care products which has made him something of a celebrity in the townships. Jabu has for many years sponsored and exhibited at the Soweto Festival Expo and is coming back this year, along with his colleagues from the AMCA stable of cosmetics companies. It turns out Jabu is sponsoring the winners of the competition that forms part of the Step up 2 a Start up programme.

Ster Kinekor sponsor the film's showing in 15 cinema complexes in Joburg, Durban and Cape Town, enabling  12 000 learners to watch it on any given Sunday. The film, Directed by Bobby Heaney and co-produced by Ferguson Films, tells the story of three friends who have a stall selling fruit and veg by the side of the road in a township. One of them feels this is getting him nowhere and has ambitions for a better life, while the others seem content to live on the margins and not push themselves too hard. The ambitious one meets a successful businesswoman who mentors him, and with her encouragement and the step-by-step approach to starting a business described in the booklet she gave him (and which all the learners get) he comes up with an idea and starts his business.

Throughout the film we are introduced to role models for the learners to look up to, as well as small business development specialists who give tips for how to start a business and overcome all the obstacles thrown at one in the early stages of being an entrepreneur.

By some extraordinary coincidence, the business started by our hero is an express delivery service for people needing medicines collected from local clinics - exactly the business Diana is featuring in a Carte Blanche programme she is in the middle of producing. But Diana's one is for real, started by a young man in Khayelitsha, Sizwe Ndima, who saw a gap in the market and took it, using bicycles as a cheap and convenient mode of transport for collection and delivery of the medicines. He is now being mentored by the Raymond Ackerman Academy for Entrepreneurship and assisted by the Western Cape Health Department to become compliant with all the regulations pertaining to the business.

Martin Sweet is passionate about entrepreneurship and this programme has the potential to really make an impact on the lives of tens of thousands of people. It goes to the heart of what we need in South Africa - a culture of entrepreneurship which leads to the creation of new businesses and millions of jobs in the productive sectors of the economy. Young people need to be motivated to start their own businesses rather than sitting by the side of the road scratching for a living or aspiring to cosy jobs in government.

Step up 2 a Start Up is a good initiative which should be expanded country-wide and shown to every single learner before they leave school. I am going to show my support for Martin by promoting it in Parliament's Portfolio Committee on Small Business Development, possibly by arranging a special viewing.

On Thursday Martin is launching his other programme which teaches maths and science to grade 11s, using the same model of cinemas on Sunday mornings. He deserves every success - the country needs a huge boost in educational delivery and this is cost-effective way of achieving it.
Posted by Toby Chance at 02:57