Zuma must account to Parliament and stop evading justice 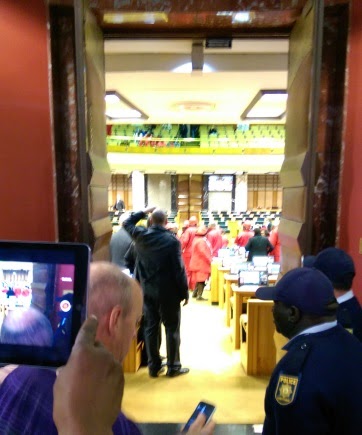 As I sat listening to Jacob Zuma answering written and follow up questions in Parliament yesterday I experienced a welling up of anger and frustration at the dire state we have reached in this country and our seeming powerlessness to do something about it. At a time when South Africa is facing multiple challenges its president is nowhere to be seen. Zuma is president in name only. His presidential duties are obscured under a massive pile of dung that has accumulated through his own making and is now poisoning our polity. This putrefying mass of denial, corruption, incompetence, cronyism and non-accountability is what has become of the Zuma sham presidency.

This is how we must interpret yesterday's antics in the House, when the EFF were ejected for calling on Zuma to repay the money he 'stole' from the taxpayer to build his Nkandla residence. The EFF refused to budge, forcing the Speaker to suspend the sitting and call in the police.

The Zuma presidency is paralysed by two related issues. First, the entire edifice of government is directed at one thing and one thing only: guaranteeing Zuma avoids his day in court.  Second, government failure to implement the NDP. They are related because Zuma has constructed a patronage network that keeps him in power and on which its members depend for their own survival, and whose ideological contradictions have led to mutually incompatible policies. 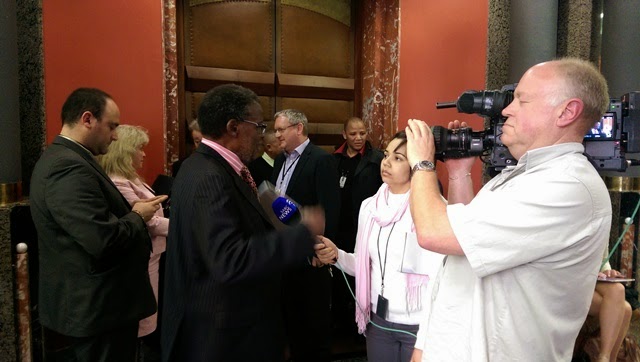 The ANC elected Jacob Zuma its president in 2007 because it was tired of the controlling and distant Thabo Mbeki presidency which suppressed dissent and stuck firmly to what his opponents called  the 1996 Class Project. Zuma's supporters, who included the vocal Julius Malema and Zwelinzima Vavi, believed he was one of them and would take the ANC decisively to the left. But they have been proved wrong, as the growing tensions over economic policy within the ANC-Cosatu-Sacp alliance demonstrate. 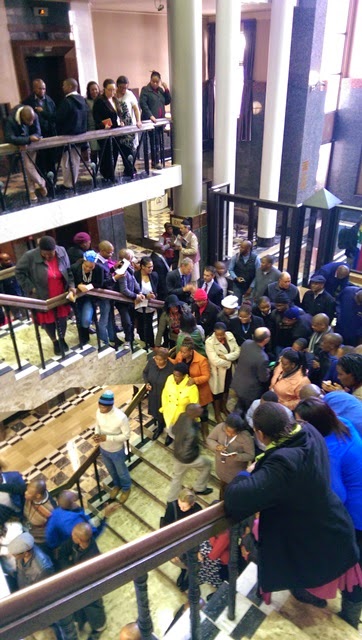 Zuma's response to the first question posed to him yesterday is instructive. Joan Fubbs, the feisty chairperson of the Portfolio Committee on Trade & Industry, asked him to clarify the Government's position on its various economic policy instruments, viz IPAP and the NGP in relation to the NDP. Zuma gave a rambling dissertation and was only forced into a straight answer when the DA's Geordin Hill-Lewis posed a follow-up question on which took priority. His answer? - the NDP. Earlier Hill-Lewis pointed out the deep distrust in the NDP expressed by Vavi and other leading members of the Alliance, including some government ministers such as Ebrahim Patel, leading to this paralysis in implementation. As I pointed out in my budget speech in July, elements of the Alliance are more wedded to the National Democratic Revolution than they are to the NDP.


What was so depressing was Zuma's apparent inability to grasp the details of the NDP and what measures the government was taking to implement it. His answer to a follow-up question by an IFP member on this issue was pathetic, and showed Zuma up as being ignorant and woefully under prepared, almost as though he was going through the motions of answering questions without a sense he had to engage in any substantive manner. Failure to turn the country's development blueprint, which is what the NDP is, into a distinct and implementable strategy, is the Zuma government's most glaring failure.

But much more damaging, and the root cause of this paralysis, is Zuma and his cronies' refusal to own up to their culpability for a host of misdeeds with Nkandla sitting at the top of the pile. This is due to their fixation with Zuma staying in power. This is an all-consuming obsession and in their minds trumps anything that might be called government, or what we should expect from a sitting administration tasked with dealing with the country's myriad problems. 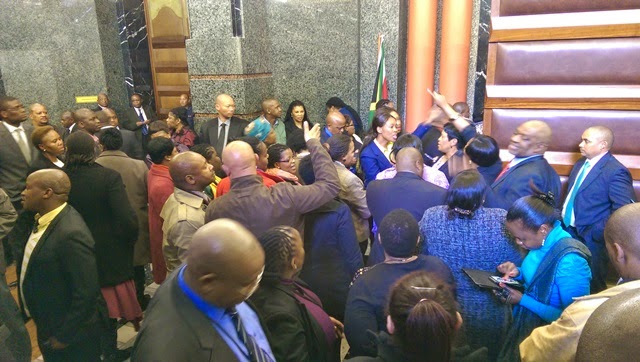 Hence the question Mmusi Maimane put to Zuma yesterday on the suspension of the Director of the NPA Mxolisi Nxasana. Maimane asked Zuma whether he believed there was a conflict of interest in his appointing the man who has to decide whether to reinstate the charges against him that were dropped in 2009. Zuma said there were no charges against him so there is no conflict of interest. But he knows the pincers of the law are closing in on him and avoided answering the question.


Nxasana has shown himself to be rather more independent-minded than Zuma and Minister in the Presidency and former Justice Minister Jeff Radebe, who appointed him, bargained on. His reinstating the Richard Mduli murder charges and suspicions that he is open to reexamining the reasons for the case against Zuma being dropped just days before he was elected President in 2009, marks him out as a Zuma enemy who must be stopped.

The appointment of Hlaudi Motsoeneng as COO at the SABC despite the Public Protector's damning report on him; the nonchalance shown by ANC Chief Whip Stone Sizani on his wife's appearance in court on charges of defrauding the Department of Education out of millions of rands; and Zuma's own extraordinary shunting of responsibility for determining his guilt on Nkandla to the Minister of Police. These all show the shameless contempt Zuma and his appointees have for justice and the rule of law. They add to the pile of dung that is stinking out not just Parliament but the entire country.

By the time Julius Malema stood up to ask the third question put to Zuma yesterday, the tension in the House was palpable. When was Zuma going to repay the money spent on Nkandla? Malema asked. Zuma responded in the most gutless manner, prompting Malema and his party to begin chanting "pay back the money, pay back the money". Speaker Baleka Mbete at first asked them to quieten down but when they refused she quickly escalated the issue and ordered them to leave the House. The shouting and chanting from the EFF benches continued, whereupon Mbete asked for the House to be cleared and the Sergeant at Arms and the police to forcibly eject the EFF Members. 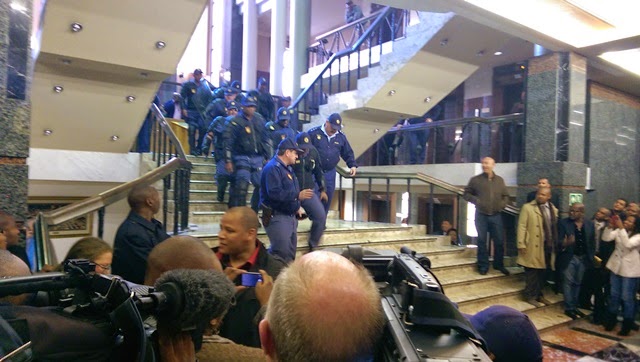 So out we marched, to be met by a phalanx of media dying to get the scoop. All this drama had been broadcast on Parliament TV and was gripping viewing, so gripping the powers that be decided to switch it off prompting a Twitter frenzy about censorship and citizens' rights to know. We all milled around in a somewhat shell-shocked state, with the SABC interviewing first Joanne Kohler Barnard ( the DA Police Spokesperson), Mmusi Maimane and Mangosuthu Buthelezi. The general feeling was that the rules of Parliament had been abused, not just by the EFF but by Speaker Mbete who took sides with Jacob Zuma in not requiring him to answer Maimane and Malema's questions.

After around an hour the police arrived in force and the officer in charge demanded the way be cleared from the entrance to the chamber. A huge crowd of MPs, journalists, officials and spectators scrapped for sight of what was happening and I expected an imminent confrontation as the police entered the chamber, but it was not to be. 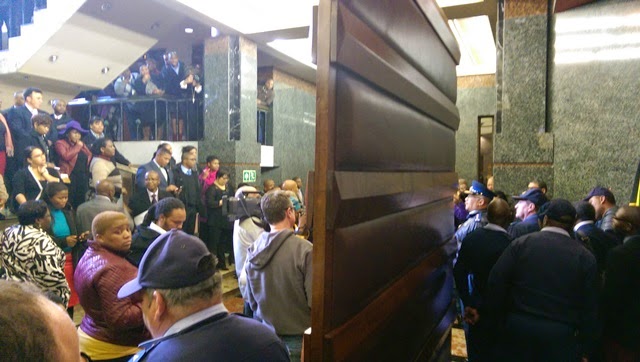 The bells started ringing, signalling MPs to return to the chamber, which we all did. There was a huddle of Whips around the Speaker's chair and soon Mbete called us to order, including the now quiet EFF benches. She explained that due to the President having left Parliament she was suspending the sitting, so avoiding the confrontation with the EFF we were all fearing. Our Chief Whip John Steenhuisen demanded that the President be recalled as soon as possible to answer the unanswered questions. It was all very deflating and we had the sense that justice had not been served.

Mmusi Maimane then summoned the DA caucus to a meeting where we discussed our position on the whole sorry episode. This was summarised in a statement released from Mmusi's office at 5:30 which you can read here. In summary, the DA believes the EFF and the Speaker both undermined Parliament. The EFF's extreme reaction to Zuma's refusal to answer Malema's question and Mbete's complicity in protecting Zuma are sickening and in their own ways totally undemocratic. The EFF's bully-boy tactics display elements of fascist behaviour which this country can not afford to sink to, while the continued shielding of Zuma from the law damages the foundations of our democracy and opens the way for any suspected criminal to avoid justice with impunity.

Right-minded South Africans must do everything in their power to ensure we do not continue down this path of lawlessness. The DA is leading the effort in pursuing all legal means to bring Zuma to justice, in particular by forcing him to hand over the 'spy tapes' which former NPA boss Mokotedi Mpshe cited to justify abandoning corruption charges against him.
Posted by Toby Chance at 04:09