Dr Thami Mazwai and me in sync on the Entrepreneurial Ecosystem

He goes on to say: "As Chance points out, small business development thrives in an ecosystem approach in which all play their respective roles. Our past was premised on silos in which the government did its own thing, the universities did theirs, the Setas blithely went their own way, the chambers had their programmes and the private sector prided itself on its market approach. This has simply not worked and the evidence, continuing unemployment and inequality, is there for all to see."

Thami and I go back a long way, to when he was appointed Director of the Centre for Small Business Development at the University of Johannesburg Soweto campus in 2008. Thami is an outspoken struggle veteran with PAC and black consciousness roots, quite contrary to my own liberal Tory foundations (see here for more on Thami's political leanings). But we find ourselves in this swirling and noisy conversation on small business where long-held positions are becoming increasingly redundant.

I commissioned the Centre to train the SMMEs exhibiting at the Soweto Festival in the basics of business management. It was later selected to host the Raymond Ackerman Academy alongside its sister at the UCT Graduate School of Business, and soon was graduating hundreds of small business owners in one of the early qualifications of its kind.

Yesterday Thami was a speaker at the National SMME Policy Colloquium at the IDC in Sandton, where he summarised the challenges facing small businesses in South Africa and what should be done to address them. The Colloquium was convened by the Department of Small Business Development and the Small Business Development Initiative, led by black business campaigner Xolani Qubeka.

It was a gathering mainly of ANC fellow-travellers and I was invited as a member of the Parliamentary Portfolio Committee on Small Business Development. Xolani was kind enough to invite me into the VIP holding room when I arrived but at the gala dinner I melted into the crowd as the ANC high and mighty, led by Minister Lindiwe Zulu and Gauteng Premier David Makhura, hogged the limelight. Black business icon Richard Maponya provided some relief with a cameo speech. 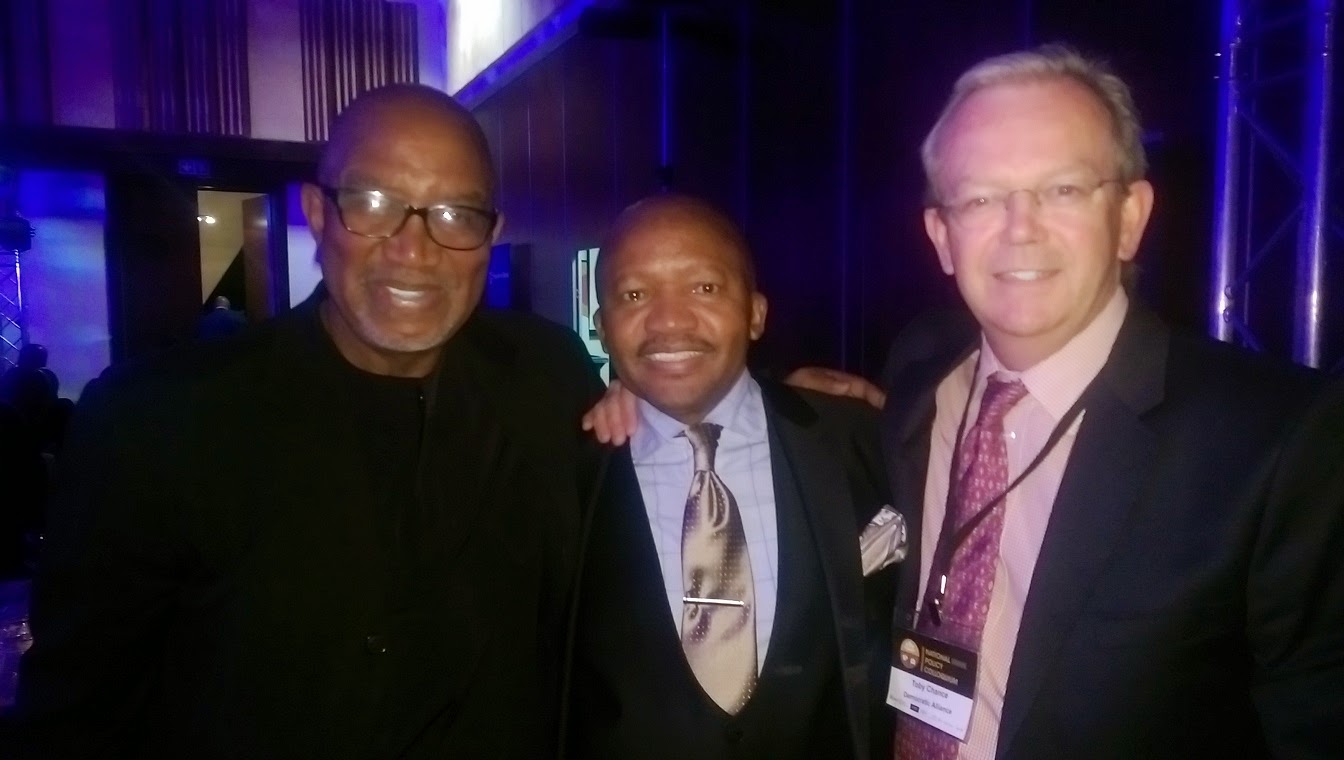 Sipho Hotstix Mabuse, Xolani Qubeka and me finding each other

I found myself at a table sitting between businessman Mark Taylor and Pumza Sobalisa from the Black Business Council. We chatted merrily between the interminable speeches which delayed the main course until well after 10 pm and stayed just long enough to jive to the sounds of Sipho Hotstix Mabuse and his stunning new-found backing singers from Soweto.

I bumped into Mark, after a 14-year gap, at the SiMODiSA StartUp conference two weeks ago and he is now looking to set up an SA arm for UK Dragons Den entrepreneur-celebrity James Caan. In 2000 Mark worked for Venfin, Remgro's private equity business which invested R20 million into eCompany, one of SA's first e-commerce incubators where I was a director. Sadly, Venfin lost their money and so did I, such is the life of an entrepreneur. As they say, failure is just a learning opportunity on the way to success.

Our entrepreneurial ecosystem is gaining steam, evidenced by the increasing frequency of these gatherings. But we need to listen to the advice of Professor Stephen Friedman, who in Business Day today cautioned against our fixation with indabas and avoidance of negotiation to fix our problems. This is what I call the fallacy of the echo chamber: people talking and listening to themselves, and not sitting across the table from those with contrasting world views.

At today's Portfolio Committee meeting I urged Minister Zulu and her Department to spread their consultative net wider, and meet people who might not agree on how to stimulate the small business sector - mainly big business and big unions.

The ecosystem is full of creative and innovative people and organisations who do not share the ANC's ideology of Radical Economic Transformation, but who nevertheless are committed to the goal of entrepreneurship and job creation.

If I achieve anything worthwhile in my job it would be finding ways of bridging this gap and establishing a common language which escapes the echo chamber. Then, the likes of Thami Mazwai and me could finally find ourselves on the same side. Are you game, Thami?
Posted by Toby Chance at 12:23