Tiggy Chance - eulogy by her elder son, my brother Sebastian 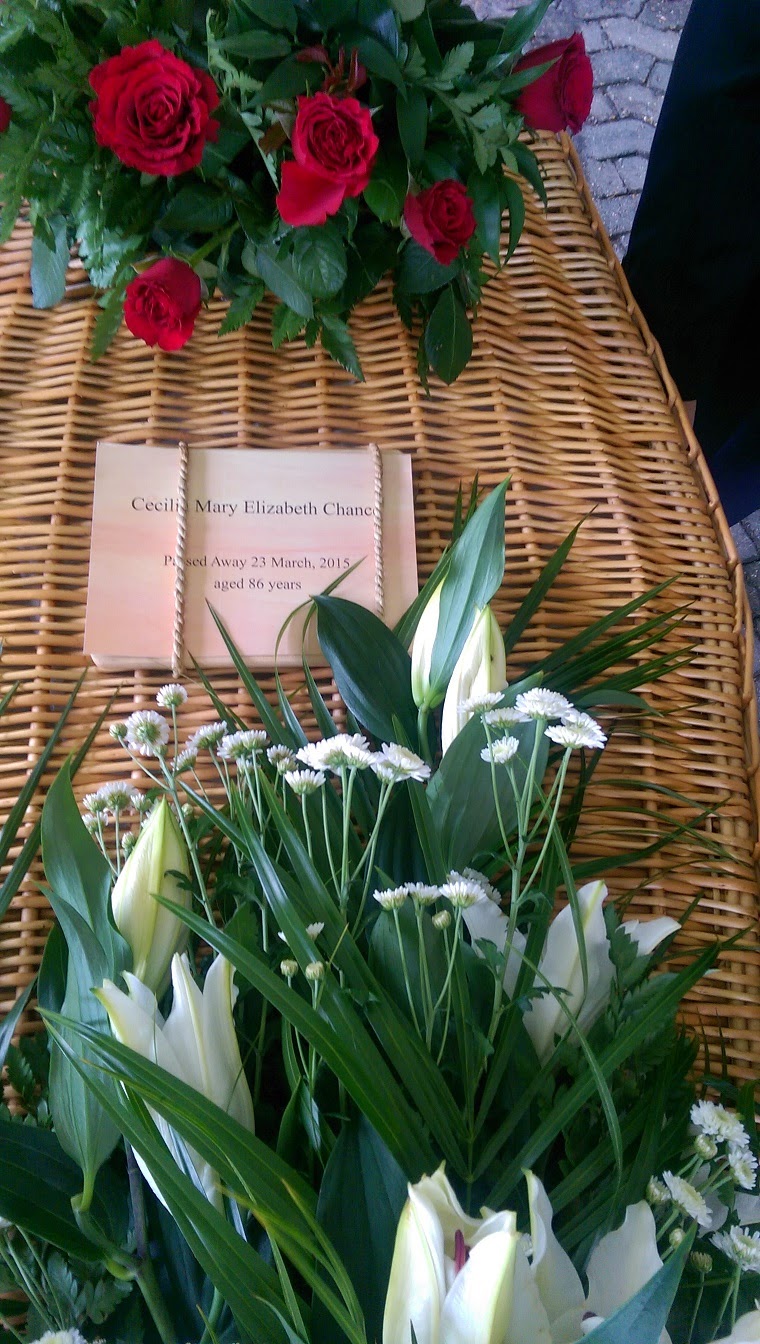 Loving wife and mother; grandmother and great grandmother; sister, aunt, godmother; poet, journalist, teacher, businesswoman, music festival founder. We will all have our own memories of the woman we have come here today to remember.

My mother was a unique, wonderful multi-talented person and we miss her greatly.

Cecilia, or Tiggy, as she became known, was born on 17th November, 1928 in Caspidge, a country house near Bromsgrove. Her father Hugh was a director of the family glassmaking business near Birmingham. Her mother Cynthia Baker-Cresswell came from a landowning family in Northumberland.

It was a prosperous, comfortable home. Educated at a Rudolf Steiner school in Surrey, Tiggy did not receive the kind of academic education  required to gain the coveted place at Oxford to read English. This was always a source of regret to her, feeling that she had not achieved her potential. However, mum didn't let this disappointment hold her back, and she went on to live a full and rewarding life.


As most of you here will know, my mother married her first cousin. My father, Jeremy, told me recently that he had been worried that Tiggy’s father, Hugh, might disapprove of their marriage. Hugh surely can’t have doubted that they were perfectly matched; sixty five years of happy marriage is proof of that. My mother was my father, Jeremy’s rock: loving, unfailingly supportive and loyal, she was always on his side; yes, she would tease him sometimes, and there were disagreements, what marriage doesn’t have its ups and downs; but one could never have doubted their unfailing love and commitment to one another, that their marriage was solid and secure. I know that my father will miss my mother terribly. Their outward displays of affection to one another were touching to see, if slightly embarrassing to a teenage son; my mother would often fling her arms around my father, calling him’ darling’, and showering him with kisses and expressions of love. Isn’t that just great!

Tiggy threw everything into being a good wife and mother, bringing up four children in a happy and loving home in Bilton, near Rugby. One of my most vivid memories of mum is of her standing in the kitchen, either at the stove, or the sink, humming the jolly tune ‘Every Little Breeze, Seems to Whisper Louise’. Our home was always a lively place. There were lots of dinner parties, childrens’ friends coming round to play, or to make lunch together; friends and relatives often came to stay, especially at Christmas which was always a happy time for us all, made special by mum’s amazing talent as a hostess. Above all, perhaps, mum’s greatest gift to her children was her constant support and encouragement to us. I well remember, on receiving news in the summer of 1970 that I had failed most of my O l’evels, mum saying, ‘never mind darling, worse things have happened’. She immediately got on the phone, securing me a place at a crammer in London, and arranging for me to lodge with my grandparents. That was typical of mum, just get on with it without a fuss. I am certain that Tora, Helena and Toby will be able to think of times when our mother’s calm and confident presence was of great comfort to them too.

A move to Scotland in 1964 - due to my father being temporarily relocated by Massey Fergusson, or Fungoids as mum liked to call them - proved to be a novel experience for my parents. Living on a small private housing estate near Alloway - home of Robbie Burns - took some getting used to. Mum referred to our house as the Noddy home, due to its small size and chalet style design. They were happy days, and it was in Scotland that mum re-awakened her desire to obtain a degree, signing up to study for a B Ed, Bachelor of Education degree. Back in Bilton two years later, with Tora and me at boarding school, mum began to take on new challenges, writing for the Times Educational Supplement as their Midlands correspondent, and continuing her education at Canley College in Coventry, later graduating with a 2:1 degree; she kept the graduation photograph in her bedroom, a reminder perhaps of one of her proudest achievements. Mum tried her hand at secondary school teaching, which wasn't to her liking, not, I suspect, being able to accept her pupils’ lack of appreciation of classic literature. Mum would take every opportunity to pass on her love of literature to her children. I clearly recall one particular visit to Stratford to watch a Shakespeare play, mum giving us a synopsis of the plot on the way in the car.

Mum’s talent for helping people led her to train as a marriage guidance councillor, a role she played very successfully and one that gave her a good deal of satisfaction. She continued her work whilst living at Park Farm house, and later in Leamington, taking on more voluntary roles with the WVRS and as a rent assessor for Warwickshire County Council.\

The purchase of Rosgyll Fawr in 1972 - the farm not far from here - was the fulfilment of a dream for my father. Mum and dad knew North Wales well, and it seemed like to perfect place to come and live. They moved to the farm permanently in 1978, working incredibly hard to make the farm a success, mum contributing to the finances with her patchwork quilt business, set up in an old farm building and running the holiday cottages which they created.  Life wasn't always easy, and at first mum missed her friends, and the social life and culture of Warwickshire. Over the years she developed a wide network of friends, developing a full social life and becoming widely respected in the community.

The farm gave mum so much pleasure:  the making of the lakes into a nature reserve - receiving an award from the CPRW – is a lasting legacy to both my parents. Lambing was always a busy time and mum could often be found nursing an orphan next to the Aga in the kitchen. One lamb, known as Albert, was a particular favourite of ours. Sitting around the dining table one Easter lunchtime, someone exclaimed ’what delicious roast lamb’. ‘Oh, that was Albert’ my mother declared with a chuckle.

Writing was one of my mother’s great passions; she had always written poetry, winning several poetry prizes, both local and national, and having her poems recited on radio 4. In 2003 she published a collection, ‘All Clear’, with illustrations by her grandson Michael. Mum had tried her hand at writing novels, but disappointingly never received an acceptance from a publisher. Her book ‘The Widdrington Women’ published in 2010 recounting the lives of her great grandmother, and her sister, was very well received; I think it gave her a lift when she discovered that was available on Amazon.

Mum’s talent for organisation, her drive and negotiating and promotional skills went into overdrive when in  1986 she started the Criccieth Festival. She had always felt that Criccieth would be the perfect place for a festival of music. Set in its magnificent position overlooking Cardigan Bay, Criccieth could become a magnet for music lovers, bringing much needed investment into the town by helping businesses to increase tourism. North Wales is home to some very talented musicians, and mum was able to persuade many of them to take part, including Bryn Terfel, Bronwen Naish and Geraint Lewis. The Criccieth festival was a huge success, and it continues today, a fitting tribute to the creative energy of its founder.

Mum loved her grandchildren: Madeleine, Tom, Simon, William, Michael and Joanna, and she was immensely proud of their achievements. She loved having them to stay; the holidays spent, first at Rosgyll fawr, and later at Ty;n Y Berllan were special times for them all and they will always treasure the memoriesl. Mum’s friends were so important to her and she had many friends, some of whom she had known since childhood. The passing of two of her closest friends, Ros Evans and Nancy Scott, affected her profoundly, and she missed them greatly. It has been comforting for my father and for my sisters and brother, to know that she was so well loved and respected by so many people. I know that Mum really valued the friendship and comfort offered to her by her family and friends during her last months. I would like to say a special thank you today to two people, Bronwen Naish, and Rosie Wynn Finch who I know gave her such love and comfort in her final, difficult, weeks and days.

Mum was not a religious person, at least not in a conventional sense. She was though a spiritual woman who believed in the goodness of people. In her final days she talked about death, and what might happen to her. Talking with Toby on the morning before she died, she asked ‘how will I know when I am dead?’ an amazing question, and one that we cannot answer. Mum believed that somewhere - call it heaven perhaps - there is a place where our spirits continue to exist together, not as humanly recognisable, physical beings, but in a more metaphysical existence. Death is definitely not the end.

As I reach the conclusion, on behalf of my family, I would like to thank all of you for joining us here today; I would like to thank Kim, the Vicar here at St Catherine's, and all whom have sent their prayers and good wishes. Yes, we mourn the loss of Tiggy, but we also celebrate a life well lived; a life rich in experience and in love and friendship.

Goodbye mum, we will love you always.
Posted by Toby Chance at 06:46