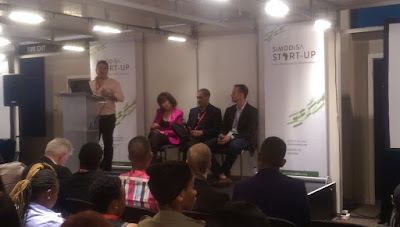 The Sandton Convention Centre buzzed with excitement and expectation on Thursday as members of South Africa's entrepreneurial ecosystem - an informal club of growing confidence and distinction - gathered for the first combined LeaderEx / SiMODiSA Start-Up Scale-Up summit.

Aimed at achieving scale and critical mass, the merging of the two events provided participants with a smorgasbord of choice, with over 200 exhibitors, a programme of 40 intense masterclasses, and opportunities for one-on-one sessions with some of South Africa's top business coaches.


As Catherine Townshend, CEO of Endeavor SA, said in the masterclass "The state of entrepreneurship in SA", this was the first time everyone in the ecosystem were gathered under one roof. This is a tribute to the efforts of Pieter de Villiers and Matsie Modise, Founder and CEO of SiMODiSA respectively, who have worked tirelessly to bring the event together, alongside the organisers of LeaderEx 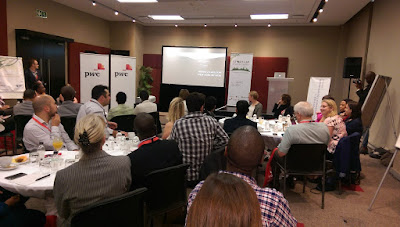 It began with a breakfast for around 90 invited guests hosted by SiMODiSA and ANDE - the Aspen Network of Development Entrepreneurs, and sponsored by PWC. Representing PWC, Maija de Rijk-Uys opened the session by comparing the prevailing low levels of business confidence in SA and a cloud of negativity, with the positive shiny cloud largely ignored by the media. South Africa has the best infrastructure, the best financial institutions, the most diversified industrial base and came 43rd out of 180 countries in the ease of doing business index. What was missing was collaboration, she said. This was a recurring theme throughout the day.

Bridget Fury of ANDE took over and gave an overview of its activities. ANDE works with SGBs - small and growing businesses - which require between $20 000 and $2 million in capital and employ between 5 and 200 people. Its mission is to create a focused and robust entrepreneurial ecosystem. In ANDE's view, the biggest missing piece of the ecosystem is early-stage risk capital. There is a plethora of institutions - both public and private sector - providing support to SGBs but there is a mis-match between the types of support available and those in need. She presented the ecosystem map which resulted from research completed earlier this year showing the who's who of the support ecosystem and who does what.

Bridget expressed the frustration that many in the ecosystem feel, at the failure of South Africa to come up with innovative"blended capital" products and solutions. By this she means blending public and private sector capital by overcoming the two mindsets of grant vs commercial capital. At the policy level, we need to speak with one voice to achieve this, she said.

(NOTE: see my blog post on this topic which the Sunday Times published on July 12th.)

We then divided into groups to consider the merits and methods of ANDE building a tool for members of the ecosystem to collaborate. While there was general agreement on the need for such a tool, questions were raised as to who should "own" it, whether it should be open source (a la Wikipedia), whether it would crowd out private sector competitors and how it would integrate with/supplement the DTI's FinFind and Dr Taddy Blecher's Virtual Incubator being driven by the Human Resources Development Council. These are issues ANDE and SiMODiSA will have to grapple with  in the coming months.

Before we concluded, Clive Butkow (former COO of Accenture and director of VC firm Grovest) gave us a preview of an exciting new development he and Paul Bacher have initiated - a national mentorship movement. Within 5 years they aim to find 100 000 mentors and 1 million entrepreneurs to work together to grow South  Africa's economy and create jobs.

They point to a national crisis unfolding: education is failing, unemployment is catastrophically high and rising, GDP growth is slowing, we don't have enough entrepreneurs (TEA rate 7%, an all-time low), and 94% of businesses will not reach their second birthday. 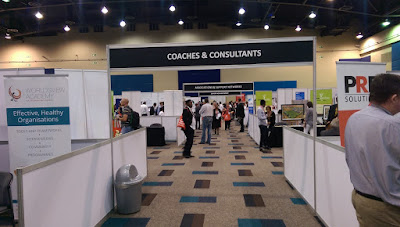 It's an ambitious project, but worth supporting. They have brought in FCB, Deloitte, EOH, the BMF, Primedia and OrtJet as supporters/sponsors and need R10 million for the first year of operations.

The rest of the day I spent on the 5th floor talking to myriad people and learning that the ecosystem is getting on with things in spite of government's apparent indifference. SiMODiSA has some buy-in from the Department of Science and Technology but in answering a written question I put to Minister Lindiwe Zulu recently she admitted neither she nor the Department of Small Business Development have met with any representative of SiMODiSA. This is disgraceful.

However, I did manage to persuade Ruth Bhengu, Chair of the SBD Portfolio Committee, to agree to send members of the Committee to Thursday's event and apart from me, my DA colleague Henro Kruger and ANC Member Bob Mabasa came along. I think it was a massive eye-opener to the Hon Mabasa - he had never been exposed to this world before, and agreed the Committee should invite SiMODiSA to come and present its strategy at a meeting soon.

I bumped into so many familiar faces at the Summit I was busy from 10:30 until the last masterclass - a discussion between Vuyisa Qabaka and The Creative Counsel founder Gil Oved - ended after 6 pm.

One masterclass I found particularly interesting had Keet van Zyl from Knife Capital and Jason Goldberg from Edge Growth list the 10 things people seeking finance need to do. Here they are: 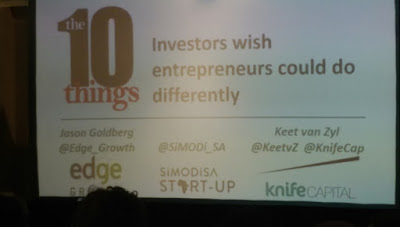 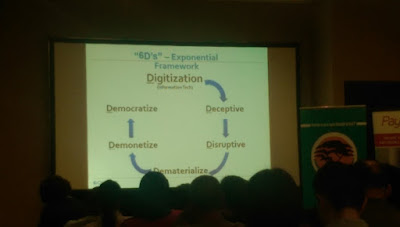 Those with enough vim to carry on ended up at the inaugural Third Thursday meetup event hosted by SiMODiSA where we heard Pieter de Villiers give a potted history of Clickatell, the firm he founded 15 years ago and grew into an international player run out of California. It was all about disruption,
he told us, converting an industry - re-charging mobile phones - from scratch cards to SMS.

It was inspiring for a new generation of entrepreneurs with ambition and drive to see that it can be done, and done big. Pieter echoed Gil's message that South Africans are too timid and need to be more ambitious when building a business. The global village gets smaller and more accessible every day and restricting your business to South Africa is a big mistake.

SiMODiSA has come a long way since its first meeting with then Finance Minister Pravin Gordhan two years ago and its first conference in Cape Town last October. The format of this year's Summit was better than a traditional conference - it provided for more interaction, was less formal and had a better variety of exhibitors.

But as one wag reminded us at the start of the day, we must be wary of too much conference-going: "I missed the market cos I was too busy trying to understand the ecosystem!"

So my message to all entrepreneurs out there - just go and do it!