On Wednesday last week our constituency, Soweto West, organised a community meeting in Moletsane focusing on policing and public safety, followed by visits to two of the police stations in our neighbourhood.

We had some very constructive conversations, and were able to gather together our top trio of public representatives in this portfolio - Zak Mbhele MP, Shadow Minister of Police in Parliament; Kate Lorimer MPL, Shadow MEC of Safety & Security in the Gauteng Legislature; and Cllr Michael Sun, Mayoral Committee Member for Public Safety in the City of Joburg. 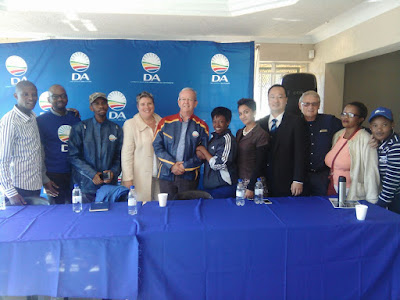 The theme for the day was Stop Crime: Make SAPS Accountable.

Kate Lorimer, who has a degree in criminology and has made this portfolio her own, gave a very powerful and moving speech which she kindly allowed me to publish below:

Some women murdered, some missing.  These names represent just a few of the approximately 63 women killed in 51 days in Gauteng this year. The others represent the names of a few of the many women who are missing. Some are found alive and well but too many never come home and leave families who are devastated by the loss of not knowing what happened to their loved one.

Thembisile Yende’s case raises a number of questions.  Allegedly, her place of work was searched by the SAPS on the day she was reported missing and the dog unit on the day after.  Her car was still in the parking lot. Yet her body was not found.  Two weeks later, the premises was searched again and her body was found.  Why did the police not find her body the first time round? The room she was found in was locked. Why did nobody bother to unlock it and look inside? If she was moved it would have shown up on the CCTV cameras which had apparently been repaired subsequent to them being found inoperable. This just shows the problem with investigation in the SAPS.

Philile Gumede went missing from Soshanguve on the 22 April this year. Initially when her family tried to report her missing, the police station did not take her case.  Her family received messages from an anonymous person saying they knew where she was.  Whether they did or not, we don’t know, but there were certainly other calls from people trying to take advantage of the family. Various section 205 applications were made to get access to different cellphones, these took upwards of 10 - 14 days to get actioned by the courts.  Finally, 8 weeks later, her cellphone was found in the hands of a boy and his mum who had picked it up on the street.  If a 205 was issued earlier she may have been found.  Philile is still missing, her parents, brother and sister are distraught.

What should government and the police be doing?  The Police should ensure rapid reporting of missing persons and murdered women and children to a central point within 6 hours from all police stations in Gauteng.  If station commanders do not comply they should be disciplined. A centralized team of experienced investigators and legal experts must be tasked with expediting Section 205 applications relating to each case and tasking investigating officers at station level with necessary actions to be taken and by when.  If, as it is said, the first 72 hours are critical in these cases, it is no use that section 205s are taking ten days to two weeks.  The SAPS, together with the Provincial SAPS must urgently engage with the Department of Justice in this regard and form an effective partnership in the matter.

The frequent secondary traumatization of sexual assault and domestic violence victims by members of the SAPS has to stop.  Detectives and SAPS members working in the CSC’s must undergo specialized sensitivity training and training on the Domestic violence and Children’s Acts.  If they are found not to be taking domestic violence and sexual assault cases seriously, they must be disciplined.  Every instance reported should be captured on an electronic monitoring system that operates across all police stations in Gauteng.  This system should enable police members to pick up serial offenders and serial victims and will assist in providing background when women and children go missing or are murdered.

A uniformed member at each station must be tasked with visiting all households where a case of domestic violence has been brought to the attention of the SAPS with a view to increasing proactive and preventive methods of policing.


With a woman killed every 8 hours in South Africa and 50% of those women killed by an intimate partner, we need to substantially up our game. We need to stigmatise abusers and abuse rather than their victims. It is time for the gloves to come off and for us to fight this battle and ensure that the safety of women and children becomes a priority for all.

Many of the questions raised concern the inefficacy of the community policing forums which play a vital role in maintaining law and order in each ward. We were able to interrogate the station commanders at Naledi and Maroka police stations on this and other issues.

We were pleasantly surprised by the positive reception we received at these police stations. Zak had been in contact with the Gauteng Commissioner's office earlier in the day to give them some short notice which led to a very good turnout of senior officers, including the divisional head of Soweto West, Brigadier Singh.

Naledi is very proud of its long-held status as one of the country's best performing police stations. An indicator of this is the successful arrest in May of the self-confessed murderers of two women  in Tladi and Naledi just days after their bodies were found.

Both station commanders made the somewhat troubling comment that the justice system is failing the police service, owing to the protection of suspected criminals' civil rights which often leads to repeat offenders getting bail and cases being thrown out before full evidence has been collected. Prior to 1996 there was a "remand pending further investigation" regulation in place which assisted police in complicated cases but this is no longer in place.

Too many police and investigating officers lack the training required to compile convincing cases and prosecutors adopt an aggressive attitude to cases where evidence is not cast iron. Prosecutors, who report to the Department of Justice, are measured on the number of successful prosecutions, whereas police officers are measured on the number of cases taken to court. This means there are conflicting incentives in place, leading to defective outcomes - more criminals on the streets. It's rather like schools being measured on the % matric pass rate rather than the number of passes achieved, leading to significant culling of weaker students in grades 9 and 10 and these pupils being left on the scrap heap

Another concerning matter raised is the lack of a work ethic among many service police officers, evidenced by their tendency to use up all their 30 days sick leave and exploitation of the policy allowing officers on shift to be off duty for 12 consecutive days just by taking 4 days leave (shift officers work for four days and have four days off so if they take leave on the four working days it effectively means they are off duty for 12 days).

The day left me much better informed of the challenges the police face in performing their duties. While it is undoubtedly true that corruption and incompetence are manifest in our police service, one cannot also deny that a large number of police officers are dedicated to their work and serving their communities.
Posted by Toby Chance at 04:21