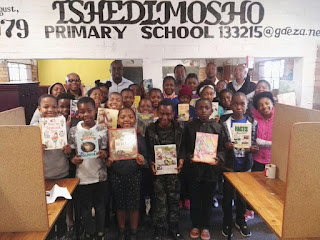 Yesterday I attended the launch of the Winds of Change Development Programme at Tshedimoshe Primary School in Mofolo, Soweto. This is an initiative of international law firm Pinsent Masons who opened an office in Johannesburg in February.

I will describe how this came about and why I was there below, but first a bit of info about the programme.

To quote from the flier handed out to parents attending the launch: 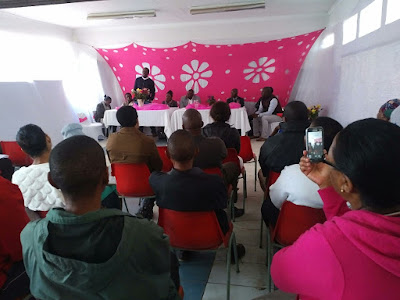 Pinsent Masons want to contribute to building a generation of well-rounded, educated, independent, dynamic young South Africans who can engage with the economy and make positive changes in our communities and the world.

This is an after-school enrichment programme starting from 24th July 2017. It is specifically targeting young children moving from primary to high school and those in high school, that is, from Grade 5/6-12 from local schools in Soweto. Although some parts of the programme can be extended to younger children depending on space. 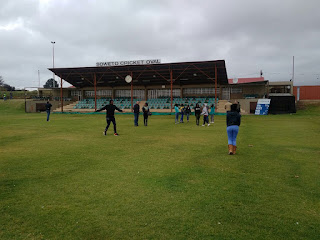 The programme consists of three parts which children will be able to enjoy:

1. Education support: Monday to Friday extra classes and homework support focusing on science, english, maths and economic management, and reading. This will be delivered by the Sir Ramabitsa Saturday School Programme, currently run from Thedimoshe Primary School for Grades 3-12.

2. Activity, sports and extra-murals: boys and girls will be able to join and play cricket after school, either through their school or through
the Soweto (Elkah) Cricket Oval. The children will also be able to learn horse-riding and caring for horses in a safe and controlled environment, and bowling at the Soweto Equestrian Centre. As the programme develops more activities will be added such as chess club, debate, drama, public speaking etc. 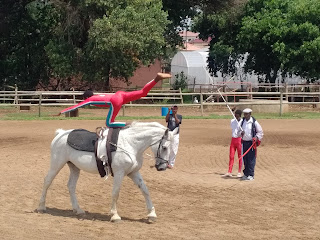 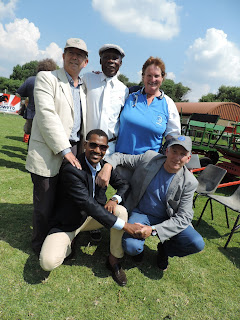 3. The inspired Saturday programme: this targets older children, Grade 10-12 to start planning for their future after school. This is about helping our children dream and plan for success in their futures to inspire them to work hard with the message that they can achieve success no matter the obstacles. We will bring successful professionals, sports celebrities and entrepreneurs etc, who are positive role models to give motivational talks and providing mentoring for our children. 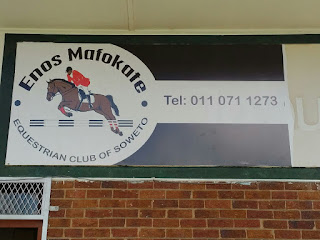 We plan to run empowerment and career planning workshops, take the children on visits to local museums and other fun activities. We also plan to provide practical support including computer lessons, opportunities for job-shadowing at the Pinsent Masons offices in Sandton, help researching and applying for jobs, internships, university applications and vocational colleges, preparing CVs and preparing for job interviews, to name a few. 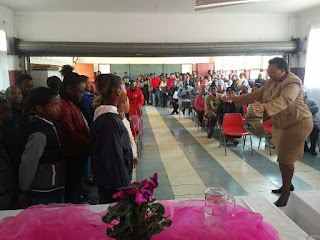 So how did this programme come about and why am I involved? Well it's a story of numerous happy coincidences working in magical ways and coming together for the greater good.

It starts with a meeting arranged by my old friend Jabu Sithole, who I have known since the mid-2000s while working on the Soweto Festival Expo. Jabu was involved in the original Soweto Homemakers Festival organised by my late mother-in-law, Adele Lucas, from 1983-85, and has a close connection with the community living in what remains of the Soweto Expo Centre in Jabavu, built in 1984 with funds raised by Adele, where he is politically active with the DA. 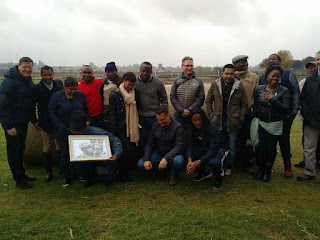 Around two years ago Jabu arranged for me to meet members of the management of the Sir Ramabitsa Saturday School, including its dynamic young Chair Johannes Moroosi. They wanted my advice and assistance in writing a business plan and budget aimed at expanding the school and giving it a more sustainable foundation. I was happy to assist, and brought in my DA colleague David Hensman (a chartered accountant and PR councillor in my constituency) to help with the budget and setting it up as a registered NPO.

Johannes assiduously took these to various funding organisations I introduced him to, including Tshikululu and Trialogue, all of which were impressed but said their budgets were fully allocated, come back next year. 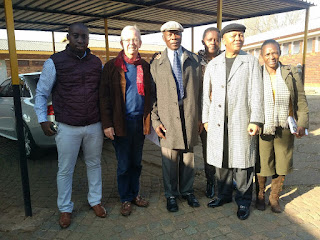 Shift gears to February this year, when I was touring Moroka and Rockville with some of my DA activists interested in setting up a tourism route for the forgotten or ignored historical landmarks in the area. These include the homes of former struggle heroes and the famous Regina Mundi Church in Rockville which acted as a refuge during the anti-apartheid era when police hunted down suspected ANC members and other banned individuals. 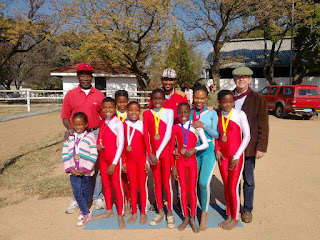 On our way through Elkah Stadium (which coincidentally was where we staged the newly minted Soweto Festival in 2005) I spotted a sign to the Soweto Equestrian Centre. Intrigued, I asked if we could stop over for a visit and this led to my meeting Enos Mafokate, the 70-plus founder of the Centre. A true inspiration who requires a blog post dedicated solely to him, for now I'll just say that this meeting led to my being asked to join the Centre's board to help steer through its ambitious plans to become a world class equestrian centre with facilities for show jumping, polo, vaulting and other equestrian events. 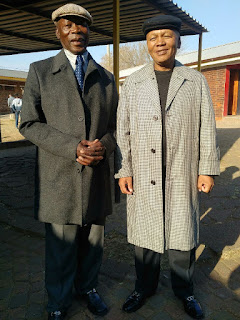 Later that month Enos and his young and capable partner Sthembiso Mhlongo arranged a visit by a group of EU diplomats including the EU Ambassador to SA, Marcus Cornaro. (See my blog post here for a write-up). Again, coincidentally, I knew some of them through my friendship with Olivia Leitch, who had met Belen Calvo-Uyarra, Political Attache to the EU Embassy, through some mutual friends. On that same day a senior executive from Pinsent Masons was present to take some photos, brought by a friend who was showing him some of the sights of Soweto.

This meeting led Sthembiso to court Pinsent Masons, who expressed interest in supporting the Centre through their planned development programme. So a further meeting was arranged shortly afterwards where I met some of the partners of the firm from the London and Joburg offices, where they told me they were looking for a educational programme to support, alongside their plans to partner with the Equestrian Centre and the Cricket Club which operates from across the road. 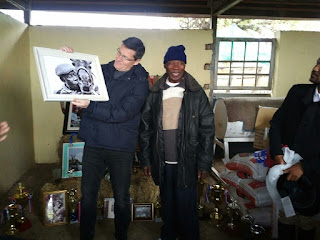 Then on May 13th, on a freezing winter morning, the Senior Partner of Pinsent Masons, Richard Foley, brought along a group of colleagues for a full-on tour and inspection of the three sites - the cricket oval, Thedimoshe primary and the equestrian club - that would become the centrepieces of their development programme. And here's another coincidence - Olivia Leitch's boyfriend, Murray Thomson, is a recently-appointed executive at Pinsent Masons who accompanied this tour!

The team from Pinsent Masons was deeply touched by their visit to the school where they met teachers, parents and pupils all diligently doing their work. There was an instant rapport and a few meetings later a deal was struck between Johannes and his team and Ruwa Matsika and George Sibanda for Pinsent Masons.

So yesterday's event was the soft launch, an opportunity for Ruwa and Johannes to sign up parents to the programme. Next Saturday a repeat function will take place at another primary school next to the Cricket Oval, and the programme will get underway later this month.

The plan is for it to grow and spread to schools and communities throughout Soweto, and naturally I am keen to see schools in my constituency benefit. There is a dire need to such an intervention to rescue many young people from a future with very few prospects, due to the inadequate education provided by our public schools which leads to high drop-out rates and poor grades by matriculants.

Interestingly, at yesterday's function Sthembiso spoke about the absence in black communities of a culture of parents taking an interest in their children's education and extra-curricular pursuits, which this programme was designed to address. 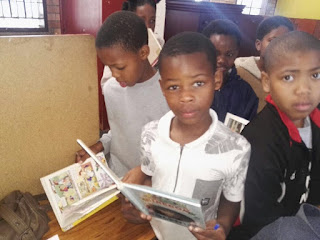 As a footnote, I should add that through an introduction I made, the Saturday School is now also supported by a books donation programme run by Chris Dykes at Infinity Learning. The photo at the top of this post and the one above show the children receiving their first batch of books.

So a huge thank you to all those dedicated people who have helped this amazing programme come to fruition. I am very excited and humbled to be involved, and am sure it will grow and grow in the years to come, into an exemplary programme of its kind which can be replicated in communities throughout South Africa.
Posted by Toby Chance at 02:08