Letter to The Star about late payments of government suppliers 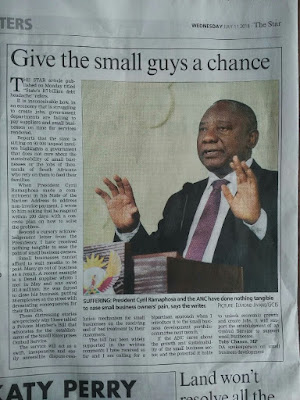 Yesterday's Star newspaper carried my letter to the editor following a front page expose in Monday's paper about government failing to pay its suppliers.

Read the letter below:


Give the small guys a chance
Toby Chance MP

The Star article published on the 9th of July 2018 titled “State’s R7 billion debt headache” refers. It is inconceivable how, in an economy which is struggling to create jobs, government departments are failing to pay suppliers and small businesses on time for services rendered.

Reports that the state is sitting on 93 000 unpaid invoices highlights a government that does not care about the sustainability of small businesses or the jobs of thousands of South Africans who rely on them to feed their families.


When President Cyril Ramaphosa made a commitment in his State of the Nation address to address non-invoice-payment, I wrote to him asking that he responds within 100 days with a concrete plan to solve the problem. Beyond a cursory acknowledgement letter from the Presidency, I have received nothing tangible to ease the pain of small business owners.

Small businesses cannot afford to wait for months to be paid, and many go out of business as a result. A recent example is a Denel supplier who I met in May and was owed R1,8 million. He was forced to close his business, putting 38 employees on the street with devastating consequences for their families.

These devastating stories are precisely why I have tabled a Private Member's Bill which advocates for establishment of the Small Enterprises Ombud Service. The service will act as a swift, inexpensive and easily accessible dispute resolution mechanism for small businesses on the receiving end of bad treatment by their customers. The bill has been widely supported in the written comments I have received so far and I am calling for a bipartisan approach when I introduce it to the Small Business Development portfolio committee in August.

If the ANC cares about the growth and sustainability of the small business sector, and the potential it holds to unlock economic growth and create jobs, they will support the establishment of an Ombud Service to support small businesses.
Posted by Toby Chance at 08:42