Section 25 of the constitution and expropriation without compensation 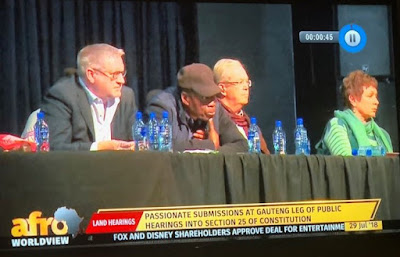 On Saturday I attended the hearings on amending Section 25 of the constitution at Heartfelt Hall in Tshwane where a long line of people offered their opinions on the topic. I later learned from Glynnis Breytenbach that many of the EFF submissions came from the same people who had appeared at other hearings. While the highest quantity of submissions were for amending the constitution the best and most cogent arguments came from those opposed. I was joined by my colleagues Patrick Atkinson, Sej Motou and Anchen Dreyer, and earlier in the day Darren Bergman, Glynnis and Ghaleb Cachalia.

Last night I took part in a public meeting organised by Glynnis Breytenbach MP's constituency in Pretoria. Glynnis invited me along with our colleague, Higher Education and Training Shadow Minister Prof Belinda Bozzoli MP. I penned some thoughts for my speech, drawing on various sources including the DA website, an article in Politicsweb by Dr Anthea Jeffery from the Institute of Race Relations, a thoughtful piece by News 24 journalist Jan Gerber amongst others.

What follows is by no means a comprehensive treatment of the topic but it might interest some readers. I highly recommend two opinion pieces by my colleague Thandeka Mbabama MP, our Shadow Minister of Rural Development and Land Reform who is doing a brilliant job getting across the DA position on the Section 25 and expropriation without compensation. You can read two of them here and here.

White people look at the property clause mainly from an economic standpoint and the expected disruption to the economy that would result from expropriation without compensation. Many black people view it differently – as News 24 Parliamentary correspondent Jan Gerber wrote after attending the Section 25 hearings, “it is about much more. It is about dignity, identity, a connection to the land of their forebears.”

The EFF and ANC have whipped up the expropriation without compensation issue for opportunistic reasons, desperate for a populist cause to lead them into the next election. The Zuma wing of the ANC forced the Ramaphosa wing to support the EFF motion in Parliament in February because of its victory on this issue at the Narec conference in December. This forms a key plank of their radical economic transformation policy platform.

I want to focus on why it is a mistake to interfere with the constitution and the impact this will have on the lives of all South Africans, including those without land today. It is also important to understand that Section 25 deals with all property, not just land – this includes buildings, cars, intellectual property, factories etc. Interfering with Section 25 makes security of ownership of all these vulnerable.

Why is it important for the economy to have security of tenure and legally enforceable property rights?

Hernando de Soto, Peruvian economist, founder of the Institute for Liberty and Democracy wrote an acclaimed book, The Mystery of Capital. He divides the world into two groups – the 2 billion people who have defined property rights and the 5,3 billion who don’t. It is predominantly the former who have created successful and prosperous economies.

Social historians speak about the tragedy of the commons where exploitation of commonly owned assets can lead to a breakdown of that asset. In South Africa we are seeing that happen now as assets held in trust by tribal authorities are traded for dubious benefit with mine owners and other powerful interests. This is what happens when assets – in this case land – are not held in the hands of the individuals who occupy it. Their rights are trashed.

The spark which ignited the “Arab Spring” uprisings was the expropriation of a Tunisian vendor’s unregistered fruit cart, underlying the broader lack of property rights across the Middle East. In South Africa, we commonly see the rights of informal traders ignored as police force them to move and confiscate their goods, which they have to pay and often bribe the police to get back. This is a form of expropriation without compensation where the law is flouted.

Go back in history and look at how the successful countries achieved economic growth and emancipation of the masses – it was security of tenure and enforceability of contracts. In the UK it started with the Magna Carta 1215 in which King John conceded rights to his nobles. Over the course of the next 700 years more and more rights were devolved down the class ladder.

From the 1200s in England the enclosure movement led to enormous social change. Enclosure was the legal process of consolidating small landholdings into larger farms. Once enclosed, use of the land became restricted to the owner, and it ceased to be common land for communal use.

It enabled ordinary people to build up assets which they used as collateral for loans. The entire financial services sector relies on security provided by assets backed up with secure title and enforceable contracts.

Possibly the final expression of this was the Conservative government 1980 Housing Act giving tenants of council houses the right to buy. This was the ultimate “property owning democracy”.

In SA, 18 million people live in former homelands with insecure tenure – the equivalent of England 1000 years ago. The chiefs play the same role as the manorial lords did, through the exercise of enormous political power and patronage. The 1996 Interim Protection of Informal Land Rights Act has not been implemented due to the ANC not wanting to offend chiefs on whom they depend for mobilising voters.

Of the 3 million RDP houses built since 1994, up to 1 million have not been transferred to the occupants. Beneficiaries cannot sell before 8 years of occupation. In the past few years DA governments have issued over 75 000 title deeds to home occupants under their administration.

Trevor Manuel, one of the four investment envoys appointed by President Ramaphosa, has said it’s a hard sell with the prospect of EWC hanging over the country. No-one will invest in a country where their property rights are not secure.

South Africa under the ANC has taken a more and more aggressive stance towards enforcing the state’s rights over individuals and companies. Cancelling bi-lateral investment treaties is an example. The Private Security Industry Regulation Amendment Bill is another – restricting foreign ownership of private security firms.

The 2015 Protection of Investment Act placed the expropriation of foreign-owned property within the framework of Section 25 of the constitution. Now that Section 25 is up for review, any changes to it could lead to years of litigation should foreign owners be deprived of their property without compensation.

This is the creeping arrival of the National Democratic Revolution which is the ANC’s Leninist-inspired ideology of depriving private owners of their property and putting it all in the hands of the state.

At least with the EFF we know what we are getting – nationalisation. With the ANC it is more insidious.

1.      Agriculture won’t give us the jobs we need – only 2% of GDP. Two thirds of people live in urban areas
2.      In a recent survey 35% prioritised job creation, 27% education and only 1% speeded up land reform
3.      Inadequate budget for land reform – only 1% of government spending - R10-billion, with R2.7-billion set aside for land reform and R3.7-billion set aside for land restitution
4.      Instead of bailing out SAA with R15 billion the government could fund 750 emerging black farmers with 1000 hectares of land plus animals and equipment and working capital
5.      It will lead to less foreign investment. China’s money is mainly loans not investment, and Saudi Arabia and the UAE’s $20 billion is very vague

It is important that we highlight the probable consequences of expropriation without compensation.

Where has it been done before and with what consequences? We all know what happened in Zimbabwe after the state-inspired land invasions of the 2000s. The country’s economy nearly halved in size. Today, only around 6% of the adult population have formal sector jobs. Millions have emigrated.

It was commonly accepted that land had to be re-distributed in Zimbabwe. The problem was the way it was done.

Another country which went the expropriation without compensation route is Venezuela – where the late President Hugo Chavez and current President Maduro have reduced the country to penury. 1980s Venezuela was the most prosperous country in Latin America, now 80% of people live in poverty.

In 2001 Chavez introduced a Land Law which permitted the expropriation of latifundios or large idle estates. The government also encouraged land invasions leading to much land becoming idle enough to qualify for expropriation. By 2010 20% of the country’s land had been redistributed. But it led to between 20% and 80% drop in production of essential crops and massive food shortages. This led to price controls to stop food inflation, and then food riots.

Between 2013 and 2017, Venezuela’s economy contracted by 39%. It is expected to plummet yet further, with a 50% contraction by 2019 at current rates of collapse. Today there is 1 million per cent inflation. University professors now urn $6 a month.

President Kgalema Motlanthe’s High Level Panel report underscores our main point: The Constitution is not an impediment to land reform, neither is the requirement for compensation.

All of this is attainable without amending the Constitution.
Posted by Toby Chance at 00:44