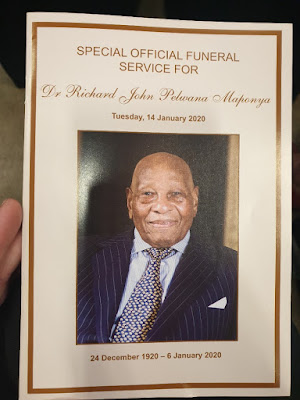 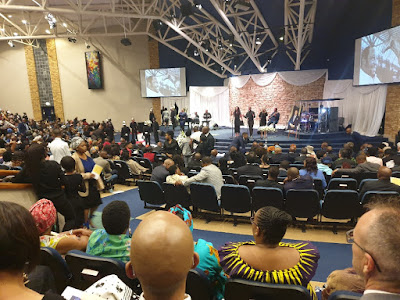 This honour is symbolic of Maponya’s heroic struggle, coincident with the ANC’s own struggle, waged against the apartheid regime. This, and his determination to succeed and entrepreneurial vigour, are worthy of the honour more than his contribution to the economy which cannot be compared in quantitative terms to the likes of HJ van der Bijl, Harry Oppenheimer or Anton Rupert.

That said, no-one can gainsay Maponya’s contribution to business and wider society was enormous. He received the Free Market Foundation Luminary Award in 2014 for his “outstanding entrepreneurial achievement and leadership” – praise indeed from the high priesthood of free market capitalism.

The current unease in the business community cannot have escaped President Ramaphosa when he went from the funeral to the Busa Economic Indaba in Sandton. Perhaps in anticipation of the frosty reception he would receive at the indaba, the President used his eulogy to commit to “trying” to bring Maponya’s vision of establishing an Entrepreneurship Institute in Soweto to fruition. Weasel words from supposedly the most powerful man in the land.

Though an avowed non-racist, Maponya was a founder of several black business organisations. That was in the 1950s, when blacks were prevented from participating in the mainstream economy. Multiracial organisations of any sort were banned. For thirty years Nafcoc stood tall, but it was dreadful to hear former Nafcoc president Sam Motsuenyane bewail the factionalism that has broken this organisation in the past decade or more.

Richard Maponya was a product of his times. Trading, wholesale and retail were the predominant business sectors in the townships in the 1940s. That is why he started out selling suits from the boot of his car, progressing to selling milk to households and then opening a general store, a supermarket, bottle stores and car dealerships. He built an empire this way, against all the odds – mainly the contempt the apartheid regime had for an independent-minded black businessman.

So it is not surprising that his pinnacle achievement, of which he was most proud, was Maponya Mall which Nelson Mandela opened in 2007. It’s a gleaming monument to trade and consumerism, bringing Sandton City to Soweto. 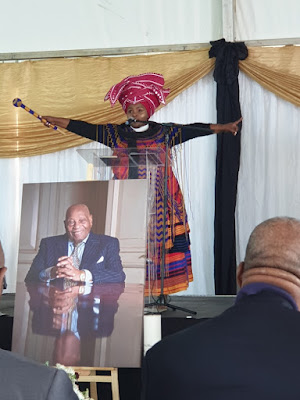 But against this achievement must be acknowledged the reality that townships remain places of consumption, not production. Nothing much has changed since the 1940s. Except that malls and later foreign-owned shops decimated the South African-owned spaza sector through which so many families thrived. Maponya saw this unfold and his cries for government to pay more attention to up-skilling entrepreneurs and reducing the cost of doing business was his understandable response.

Three kilometres from Maponya Mall lies the Orlando West Industrial Park, not far from where Nafcoc was founded in 1955. It was built in the 1980s by the Botha government in partnership with Anton Rupert’s Rembrandt Group but now lies dilapidated and neglected. It is owned by the Small Enterprise Finance Agency, which is trying to get shot of it.

In October 2014 I attended the launch of the Township Economic Revitalisation Programme at Orlando Stadium. The leading government representatives were Gauteng Premier David Makhura, Deputy President Cyril Ramaphosa and Minister of Small Business Development Lindiwe Zulu, my opposite number at the time. Makhura and Ramaphosa waxed lyrical about government’s ambitious plans to invest in the township economy. The 2019 ANC manifesto said the same. They repeated these commitments at Richard Maponya’s funeral.

And yet the township economy remains neglected. Boards advertising the yet-to-be-built Jabulani Office Park are so old they are falling down. The Orlando Towers redevelopment project, on the drawing board for twenty years, is moribund and clouded by accusations of corruption levelled at the Joburg Property Company which owns the site.

So why isn’t more being invested in Soweto’s productive economy?

Perhaps an inkling of why words are empty came in an ANC councillor’s tribute at the memorial service held at Maponya Mall. She quoted from the Freedom Charter’s call for wealth to be shared equitably and the National Democratic Revolution in which blacks will be liberated to participate in the economy, an economy in which the state plays the dominant part.

Both of these injunctions could not be further from the world Richard Maponya created and envisioned. To him, it was individual vision, hard work, perseverance and self-reliance that mattered. He shared his wealth generously, but first he had to create it.

The politicians responsible for devising policies to bring prosperity to all are still blinded by tired ideologies and allegiances which Richard Maponya long ago abandoned, if he ever espoused them. Chief amongst these was BEE which he said stifled initiative and encouraged entitlement.

Richard Maponya was obsessed with entrepreneurship as a means of reducing poverty. He hardly ever mentioned inequality. He was wise enough to realise that in reducing poverty some people get rich so inequality rises at first. Widespread business ownership and employment will eventually bring inequality down, as is proven by the Gini coefficients of developed versus developing countries.

To Richard Maponya, the family is the basic unit of society and the source of wealth creation. History and a cursory look at the economic development trajectories of all rich countries prove him right.

What is being done to foster family prosperity in South Africa? Government boasts about its 17 million social grants alleviating poverty. The truth is the ANC should hang its head in shame that families are dependent on government handouts rather than self-sufficient as Maponya would have them be.

President Ramaphosa gives his state of the nation address in little under a month. The nation is divided, angry, frustrated and impatient. Ramaphosa was gifted his riches, Maponya made his himself. The President could do no better than deeply imbibe the values and life story of Richard Maponya and repeat it in his SONA message, loud and clear.

Meanwhile, big business should take a leaf from Maponya’s book, overcome the myriad obstacles before them and seek out opportunities to team up with the townships’ vibrant young entrepreneurial talent. It could be a heady mix.

Together, government and business must realise the township economy will only thrive if the economy as a whole thrives. This requires a concerted effort to expand our markets beyond the spending power of debt-laden South Africans, which even Maponya depended on, and towards rich consumers in overseas markets. They should grasp Maponya’s obsession with stimulating entrepreneurship and focus it laser-like on cooperation between big and small business to achieve this goal.

And we, as individuals, should learn the lessons from Maponya’s life story and ask ourselves, do we have a purpose and the perseverance to see it through?
Posted by Toby Chance at 06:52