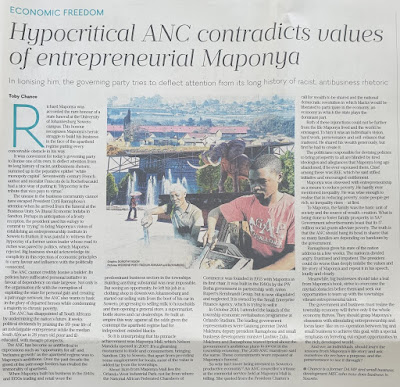 The current unease in the business community cannot have escaped President Ramaphosa's attention when he arrived from the funeral at the Business Unity South Africa Economic Indaba in Sandton. Perhaps in anticipation of a frosty reception, the President used his eulogy to commit to “trying” to bring Maponya’s vision of establishing an Entrepreneurship Institute in Soweto to fruition.

It was painful to witness the hypocrisy of a former union leader whose road to riches was paved by politics, which Maponya rejected. Big business should acknowledge its complicity in this rejection of economic principles to curry favour and influence with the politically connected.

The ANC cannot credibly lionise a builder. Its policies have suffocated personal initiative in favour of dependency on state largesse. Not only is the organisation rife with the corruption of exploiting the state for personal gain and creating a patronage network, the ANC also wants to bask in the glory of departed heroes while condemning a majority to chronic poverty.

The ANC has disappointed all South Africans by undermining the nation’s future. It seeks political dividends by praising the 99 year life of an indefatigable entrepreneur while the median South African is 28 years old, poor and ill-educated with meagre prospects.

The ANC has become as antithetical to expressions such as ‘opportunity for all’ and ‘inclusive growth’ as the apartheid regime was to Richard Maponya’s ambitions.  Over the last decade the greed of the patronage feeders has rivalled the immorality of apartheid.

When Maponya built his business in the 1940s and 50s trading and retail were the predominant business sectors in the townships. Building anything substantial was nigh impossible. But seeing an opportunity he left his job in a clothing shop in downtown Johannesburg and started out selling suits from the boot of his car in Soweto, progressing to selling milk to households and then opening a general store, a supermarket, bottle stores and car dealerships. He built an empire this way, against all the odds – given the contempt the apartheid regime had for independent-minded blacks.

So it is not surprising that his pinnacle achievement was Maponya Mall which Nelson Mandela opened in 2007. It’s a gleaming monument to trade and consumerism, bringing Sandton City to Soweto. But, apart from providing some employment for locals, the bulk of the value is added far from the townships.

Three kilometres from Maponya Mall lies the Orlando West Industrial Park, not far from where Nafcoc was founded in 1955 with Maponya as its first Chairman. It was built in the 1980s by the Botha government in partnership with Anton Rupert’s Rembrandt Group but is now dilapidated and neglected. It is owned by the Small Enterprise Finance Agency, which is trying to sell it.

In October 2014 I attended the launch of the Township Economic Revitalisation Programme at Orlando Stadium. The leading government representatives were Gauteng Premier David Makhura, Deputy President Cyril Ramaphosa and Minister of Small Business Development Lindiwe Zulu. Makhura and Ramaphosa waxed lyrical about government’s ambitious plans to invest in the township economy. The 2019 ANC manifesto said the same. They repeated these commitments at Richard Maponya’s funeral.

So why isn’t more being invested in Soweto’s productive economy? An ANC councillor’s tribute at the memorial service held at Maponya Mall is telling. She quoted from the Freedom Charter’s call for wealth to be shared and the National Democratic Revolution in which blacks would be liberated to participate in the economy, an economy in which the state plays the dominant part.

Both of these injunctions could not be further from the life Richard Maponya lived and the world he envisaged. To him, it was an individual’s vision, hard work, perseverance and self-reliance that mattered. He shared his wealth generously, but first he had to create it.

The politicians responsible for devising policies to bring prosperity to all are blinded by tired ideologies and allegiances which Maponya long ago abandoned, if he ever espoused them. Chief amongst these was BEE which he said stifled initiative and encouraged entitlement.

Maponya was obsessed with entrepreneurship as a means to reduce poverty. He hardly ever mentioned inequality. He was wise enough to realise that in reducing poverty some people get rich so inequality rises, at first.

To Maponya, the family is the basic unit of society and the source of wealth creation. What is being done to foster family prosperity in South Africa? Government advertisements boast its 17 million social grants alleviate poverty. The truth is the ANC should hang its head in shame that so many families are dependent on government handouts.

President Ramaphosa gives his state of the nation address in a few weeks. The nation is divided, angry, frustrated and impatient. The President could do worse than deeply imbibe the values and life story of Richard Maponya and repeat it in his SONA message, loudly and clearly.

Meanwhile, big business should take a leaf from Maponya’s book, overcome the myriad obstacles before them and seek out opportunities to team up with the townships’ vibrant entrepreneurial talent.
Together, government and business must realise the township economy will only thrive if the whole economy thrives. They should grasp Maponya’s obsession with stimulating entrepreneurship and focus laser-like on cooperation between big and small business to achieve this goal, with a special emphasis on ferreting out export opportunities in the rich, developed world.

And we, as individuals, should learn the lessons from Maponya’s life story and ask ourselves, do we have a purpose and the perseverance to see it through?
Posted by Toby Chance at 21:22