A family (and nation) of entrepreneurs, innovators and community builders 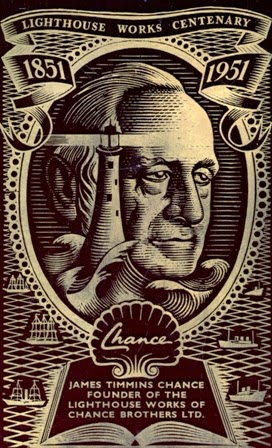 Today I added an article to my website, entitled Chance Brothers: Lighting the World, which appears in edited form in the March 2014 issue of the magazine History West Midlands. The magazine focuses on the six counties that make up the heart of England - Herefordshire, Staffordshire, Derbyshire, Warwickshire, Worcestershire and Shropshire. The current issue is about the glass industry in the West Midlands, where the firm of Chance Brothers ran a major industrial enterprise for over 150 years (click here for a short video on the firm). The engraving to the right is of James Chance, my great great grandfather, who was the brains behind the firm's lighthouse business which celebrated its centenary in 1951. This year is the bicentenary of his birth. Most of the lighthouses in South Africa (see my summary here) are equipped with optics supplied from their factory in Smethwick near Birmingham, and have become a tourist attraction for thousands of visitors to our scenic shores.

Though I emigrated to South Africa from the UK thirty years ago, and became a citizen here in 1992, I retain close links with my family and friends and visit the country at least once a year. My book, Lighthouses: The Race to Illuminate the World, published in 2008, was the first to deal extensively with the Chance family's contribution to British industrial history since my great great uncle J.F. Chance's History of the Firm of Chance Brothers published in 1919.

The title I have given this post - A family (and nation) of entrepreneurs, innovators and community builders - draws on the theme of my article which identifies what I consider the three defining characteristics of the family business. I won't dwell on it here (read the article for more), suffice to say these characteristics persist to the present day in members of my family, including myself.

Two days ago the new South African High Commissioner to the UK, Obed Mlaba, made the enlightened observation that the UK were "true friends" of South Africa while our relationship with China was "just about what they pull out of our ground." A Business Day leading article opined "It is in Britain where we lay the groundwork for our relationships with the industrialised world. The quality and vitality of our diplomacy in London, because it is where we still have so many friends, has never been more important."

It is with a swell of pride - and a vigorous nod of agreement - that I read these words. For the past fifteen years South African diplomacy and trade relations have steered in the direction of the formerly non-aligned countries, friends of the former liberation movement (including Libya and Cuba), and Africa. Now, as a BRICS member we are sidling up to two countries - Russia and China - with dubious records of human rights and democratic values, though in the case of China it's understandable we wish to court favour with this emerging global behemoth.

But is with horror that I await the rumoured announcement of a deal for Russia to build at least one, possibly more, hideously expensive nuclear power stations here in the next decade. Can one seriously expect the procurement process to be transparent? It will make the arms deal look clean as a whistle by comparison. And in the Ukraine and Crimea, Russia's pretensions to once again dominate half the Asian continent are becoming more evident by the day. There are eerie similarities between Russia and what South Africa is becoming - a kleptocratic, corrupt and inefficient state run by power-drunk cronies. Do we really want our country to go down this route?

Britain has three centuries of cultural and business ties with South Africa which cannot be ignored. Britain is the original modern liberal democracy, whose values and core principles are enshrined in our own constitution. True, many elements of colonialism were odious and it was a tragedy and a travesty that the 1910 Act of Union did not include blacks in the political settlement with the Boer Republics. But remember, it was Harold Macmillan's Winds of Change speech in 1960 which helped drive South Africa into the diplomatic wilderness, just as it was Nelson Mandela's meeting with Mrs Thatcher at Number 10 Downing Street on his first visit to the UK after his release from prison that signified our welcome back into the firmament of nations.

So three cheers to Obed Mlaba for his courage to go against the prevailing wisdom of his party, the ANC. His words were not just diplomatic speak, but sensible and timely. Let there be many more acts of true friendship between the UK and South Africa in the years to come, with a strong focus on entrepreneurship, innovation and building our respective communities. It's a far better long term option than swooning to the charms of the neo-colonial pretenders to the east.
Posted by Toby Chance at 07:41