The Minister of Finance, Pravin Gordhan, presented his fifth budget to Parliament last week. It was received fairly well by most economic commentators, the minister continuing the tradition of ANC administrations of implementing fiscally conservative economic policies rather than taking the expansionary route and risk incurring the wrath of the ratings agencies. The unions hate this approach, of course, declaring it neo-liberal, while others criticised it for not being radical enough in proposing more measures to stimulate economic growth. One area that has drawn flak is its policy on small business. Most people agree small businesses will be our main engine of economic growth and job creation but there are fundamental differences on how to get the engine into hi-rev mode. What does the DA have to say on the matter?

First, some definitions. In South Africa we talk of SMMEs - small, medium and micro enterprises. These are usually defined according to turnover, number of employees or gross asset value excluding fixed property. The National Small Business Amendment Act of 2004 (amending the Act of 1995) categorises enterprises by sector, and the definitions vary between sectors. To make things more complicated the Act introduced another category - the very small enterprise - without explaining why. Here are some examples showing the sector variances: (column 2 number of employees; column 3 turnover; column 4 assets)

One grey area that has caused confusion since the act was passed was, if a company was Small by one measure and Medium by another measure, which measure prevailed? In practice it does not matter much, for the agency established in the Act to promote small businesses, the Small Enterprise Development Agency, included all four size categories in its mandate. 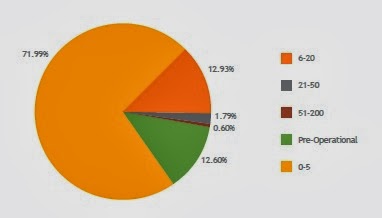 Seda's 2012-2013 annual report includes an interesting graph indicating over 70% of the enterprises supported in that financial year had only 1-5 employees (amusingly the key to the graph states 0-5 employees - ever found a company employing no one?) placing them in the micro category. 13% fell into to very small category, 1,7% into the small and less than 1% into the medium category. Over 12% of the enterprises supported were pre-operational.

These statistics are very revealing, especially when one considers the majority of jobs will be created by small and medium enterprises which have survived the first few years and are beginning to experience significant growth. Seda, which has been in existence for 8 years, states that its emphasis in future years will be on these larger (or not so small) businesses. Why did it take 8 years to change direction, millions if not billions of taxpayers' rands later?

In his budget speech, Gordon accepted some of the SMME reports of the Davis Tax Committee including easing qualification for tax concessions on businesses with a turnover of up to R1 million. But as Pavlo Phitidis, CEO of Aurik Business Accelerator pointed out on Bruce Whitfield's Money Show on 702 and Cape Talk, why didn't he make the threshold R5 million? That will take in many more businesses which have the capacity to create jobs and grow the economy. Phitidis gave the budget a 2 out of 10 on small business!

There were several other provisions in the budget for small business, including funding of R6,5 billion over 3 years (presumably to pay for Seda and the other provincial SMME development agencies like the Gauteng Enterprise Propeller), increasing tax incentives for donations to small business development agencies (presumably private sector) and replacing progressive taxation on small businesses with a tax credit for compliant businesses. All of these are just tinkering on the edges of what is needed.

The DA's policy on SMMEs goes a lot further than anything proposed both in the budget and by the Department of Trade and Industry, where the SMME competency lies. Both at a national and Gauteng provincial level, there is general acceptance in the DA that entrepreneurs as a class need incentives and support, beginning with a business-friendly government and not one that is continually making it difficult to start businesses and hire more employees. As the DA policy on the economy states, "We have not succeeded in creating a nation of business owners." When DA Gauteng Premier Candidate Mmusi Maimane launched his policy on small business a few weeks ago, he said let entrepreneurs run Gauteng!

An over-arching strategy in this policy is to work closely with the private sector to stimulate small business growth. The DA recognises the incapacity of the state to deliver, both in absolute terms and in its ideological differences with free-enterprise. So by co-operating with private sector development agencies and business incubators/accelerators; increasing the relative importance of socio-economic contributions in the BEE scorecard; and by establishing the National Venture Capital Fund - to name just three initiatives - the DA creates an environment where business is viewed as a partner and not an adversary or a milking cow for SARS.

In line with our vision of an open opportunity society for all, the DA is proposing an Opportunity Card, Opportunity Vouchers and Opportunity Centres that will make it easier for small business owners to access support and incentives. A one-stop-shop facility for registering a new business, the Opportunity Centres will be backed up by a national toll-free help line where entrepreneurs can get information on a host of matters concerning starting and operating a small business. The DA will also make it easier for small businesses to access government contracts, for example by breaking tenders into more manageable contracts and creating a community database of small service providers for government procurement departments to access.

The DA has policies for the informal sector - which  includes nearly all the businesses employing less than 5 people - that are very different from the ANC's. The informal sector provides income for up to 6 million people and is the individual, or private sector's organic equivalent of poverty alleviation or social grant programmes that have been massively increased by this government. Measures the DA propose include introducing a Code of Good Practice on engagement with the informal sector. A stark comparison is provided by the DA's informal trader summit held in Cape Town in early 2013, and the ANC Metro in Johannesburg clearing out thousands of small traders from the city under the pretext of making the city cleaner and better for residents and property owners. The DA believes in consultation and respect for the dignity and human rights of this marginalised community, while the ANC's heavy-handed and often violent approach just further antagonises it.

A very worrying picture of just how marginalised the small business sector feels, is provided by research conducted by the Finmark Trust in 2010, showing the level of awareness of support programmes provided by various entities:

As my main policy focus area I will be doing all I can to communicate the DA policies on small business and the informal sector to as many SMMEs as possible in the coming months. I believe owners of small businesses, however large or small, are much more likely to vote DA than employees, and this goes for owners of any hue or gender.

The DA must be seen as the friend of enterprise - whether Anglo American or the hair salon on every township street corner.
Posted by Toby Chance at 06:15