Will the DA make a dent in Soweto on May 7th? 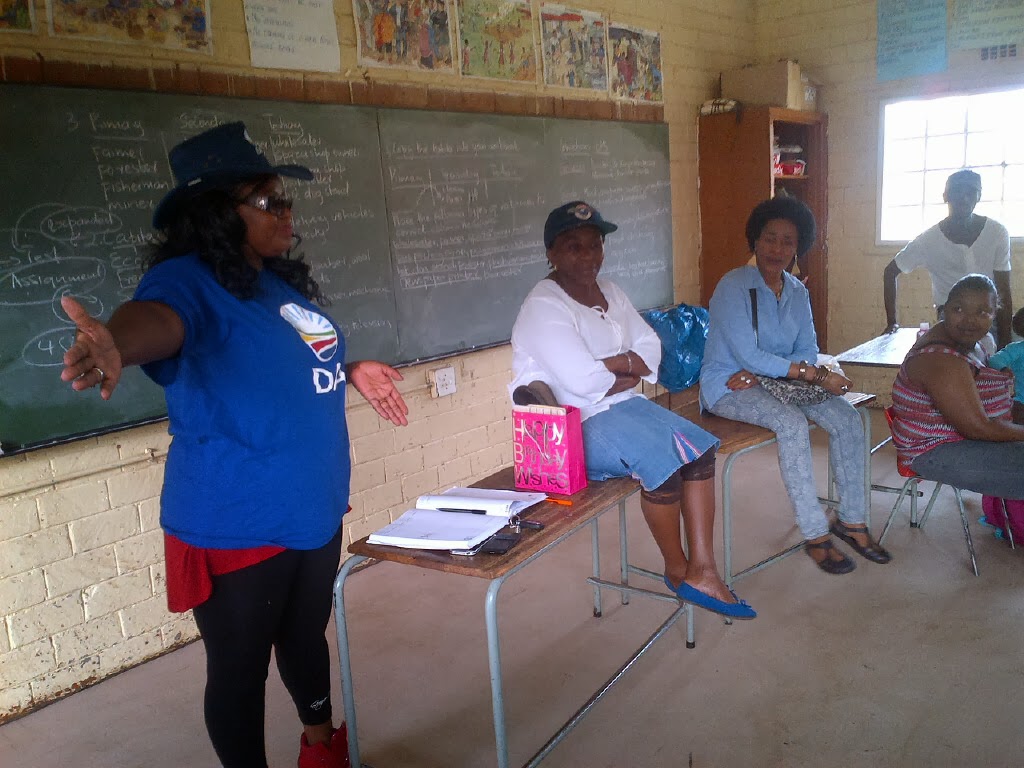 Yesterday I attended a DA meeting in Zola, in the western part of Soweto. I was invited by Nonhlanhla Sifumba, the DA's PR councillor for that area, whom I'd met the previous Saturday at a Soweto West constituency meeting presided over by the MP, James Lorimer and Campaign Manager Hilton Masera. Taken together, the meetings showed how far the DA has come in attracting voters in Soweto since the last election, and how far we still have to go.

To refer to the DA's Soweto West constituency  itself needs some explanation.

South Africa's electoral system does not provide for constituencies. In national and provincial elections we have a proportional representation system where public representatives are elected from party lists. In Gauteng province, the DA has selected 79 candidates for the national (Parliamentary) list. The proportion of these elected  to Parliament will be directly proportional to the DA's vote in Gauteng, and the proportion of the total votes cast nationally coming from Gauteng.

The National Assembly in Parliament has 400 seats. Gauteng represents roughly 24% of the registered voters in South Africa. So if voting goes according to registrations, roughly 96 MPs will come from Gauteng. If the DA gets 35% of the vote in Gauteng, that translates into roughly 33 MPs being elected from the list of 79 candidates. The DA will then allocate each of these MPs to a 'constituency' in the province, as part of our policy of getting MPs closer to the voters on the ground than is possible in a proportional representation system.

If we had a constituency system in this country, the DA would not have an MP for Soweto West because in the 2009 election we did not get enough votes there to make us the biggest party (the 'first past the post' system is how an MP gets elected in a constituency). In fact it's doubtful we would have any councillors either. At local government level we have a hybrid system where half the councillors are directly elected in wards, and half are PR councillors elected from lists. So the DA has assigned several of its PR councillors to Soweto to represent the party there, just like it has done with James Lorimer.

Technically, James and our other MPs assigned to areas where the DA does not command a majority of voters, represent the Party in those areas, which we call constituencies. They can't claim to represent all the voters in that constituency in Parliament. Instead, the represent the DA voters. It's an anomaly but hard to avoid in our electoral system.

The ANC regards Soweto as its electoral heartland and the DA an unwelcome impostor. This is beginning to change. In the 2009 election in ward 28 in Soweto, which takes in the relatively prosperous Diepkloof Extension 1, the DA won 1.47% of the vote. In the municipal elections in 2011 the vote increased to 8.23% and in the 2012 bi-election it doubled to 16.77%.

A few years ago it would have been unthinkable for a white DA activist to walk around alone wearing a DA t-shirt - like I did yesterday. I went to the Soweto Arts & Crafts Fair at the Soweto Theatre where I had a friendly welcome from the organisers and some others I knew. I did not feel in the least bit intimidated or vulnerable, in fact many people shook me by the hand and looked excited to be talking to a DA person. Later, I met Nonhlanhla at the Spur in Jabulani Mall and though I got quite a few odd looks, there were lots of smiles too. When we sat down a school friend of Nonhlanhla's came to say hello and gave me a friendly ANC power solute. This is a sign of political maturity and tolerance, which is to be welcomed.

The meeting was not very well attended - according to Nonhlanhla the branch has had some problems which need addressing. It was in a high school and as we waited for the stragglers to arrive, I glanced up at the pictures depicting scenes from everyday life with titles, one of which was Entrepreneurs. This gave me the intro to my talk I needed.

Nonhlanhla introduced me as a Parliamentary candidate with a background in Soweto through the Soweto Festival Expo, and then it was over to me. After a few minutes talking about my background and how shared values across continents made it possible for us to have something in common despite our very different life experiences I pointed to the picture and initiated a discussion on entrepreneurship. My message to the activists is that the DA is the natural party for small business owners and informal traders to vote for, and is a neglected voter segment we are now making a big effort to win over.

There are literally hundreds of thousands of these people living in Soweto and the ANC does not have a good story to tell them. "The ANC does not understand enterprise" I said. "Tendepreneurs are not real entrepreneurs - they have been given their businesses on a plate. The ANC's policy towards informal traders would suffocate them under mountains of regulations and red tape. The DA would liberate them."

To be sure, a significant slice of the middle classes in Soweto and other townships in South Africa are fed up with the ANC's corruption, incompetence and cronyism and will vote DA. But workers - be they teachers, nurses, bus drivers or policemen, and especially unionised workers - are less likely to vote for the DA than business owners - be they selling tomatoes by the side of the road, running a hair salon or a panel beating shop. It's here that the DA will pick up votes in the election on May 7th.

What are the common characteristics of the small enterprise owner?

1.      They are self-reliant and independent-minded
2.      They are aspirational and believe their lives can get better
3.      They have a can-do attitude
4.      They believe their lot has been ignored by big business and banks
5.      They are dismissive of current political attempts to address their needs
6.      The under-35s tend to be either politically non-aligned or willing to be convinced if something better than the current lot comes along
7.      They are prepared to become advocates of a new approach if they see it working

The DA activists in the room were all motivated by this approach. One, a young woman, had left her job to start a baking business from home. She was a classic informal business - a bank account but no VAT number, company registration or tax number. She was effectively outside the state's net. Another woman had formed a construction company with all the necessary registrations but had no business - all the tenders went to the ANC's friends, she complained. Then another woman asked me how I could help mentor her in her own new business venture.

All of this goes to show there is huge latent enthusiasm for starting a small business in Soweto - some survivalist, some lifestyle driven, some growth oriented. What is needed is an injection of energy and real incentives to boost these people's chances of success. This is the DA's Open Opportunity Society for All in microcosm.

The DA's vote in Soweto will increase significantly this year compared to 2009. Then, we hardly had a presence, we were unknown, distrusted, distant. Now we are forming relationships everywhere, our message is getting through. I predict in the 2016 local elections we will win some wards in Soweto and a huge chink in the ANC's armour will have opened up.