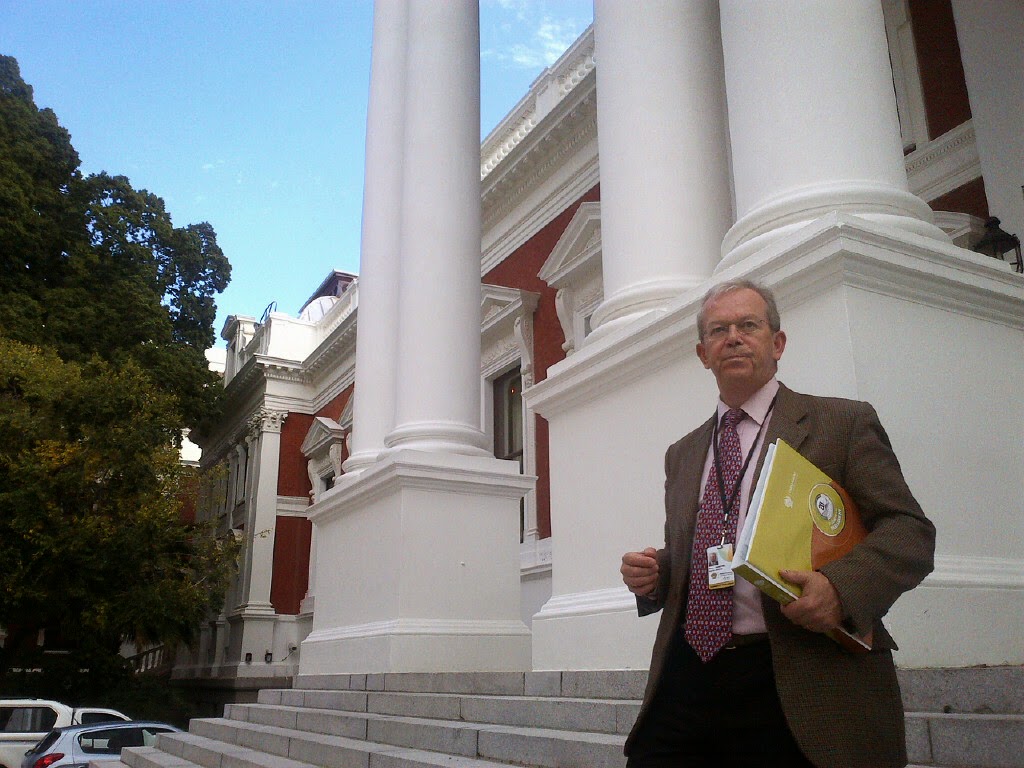 Yesterday I got a step closer to becoming a Member of Parliament, by registering at the National Assembly and getting my security clearance. Diana accompanied me all the way. Amazingly, I have never set foot in the Parliamentary precinct so every step was new for both of us. It was a poignant moment when I was handed the lanyard and tag, saying in black writing on a gold background Member of Parliament. When I began this blog the thought of actually being an MP was very remote but now it's only a day away. I am sure every one of the hundred or so new MPs must be going through the same set of feelings and emotions as I am. It all began with that magical number - 10 - on Friday January 24th, and yesterday that number took on an even greater significance. We had a quick breakfast at MP-hangout Bread Butter and Honey located in the appropriately named Spin Street off Parliament Square. They do a delicious Bircher meusli and one-egg breakfast as specialities. Diana was recognised by a former colleague from Carte Blanche, Graunt Kruger, who used to do their website and online stuff and is now finishing a PhD in development finance. In August he's heading  to Boston, Massachusetts - the same neck of the woods as Lindiwe Mazibuko who is going to Harvard for a year's Master's course on public administration (her sudden resignation from Parliament has caused a huge stink in the DA, for obvious reasons, and the media have had a field day). 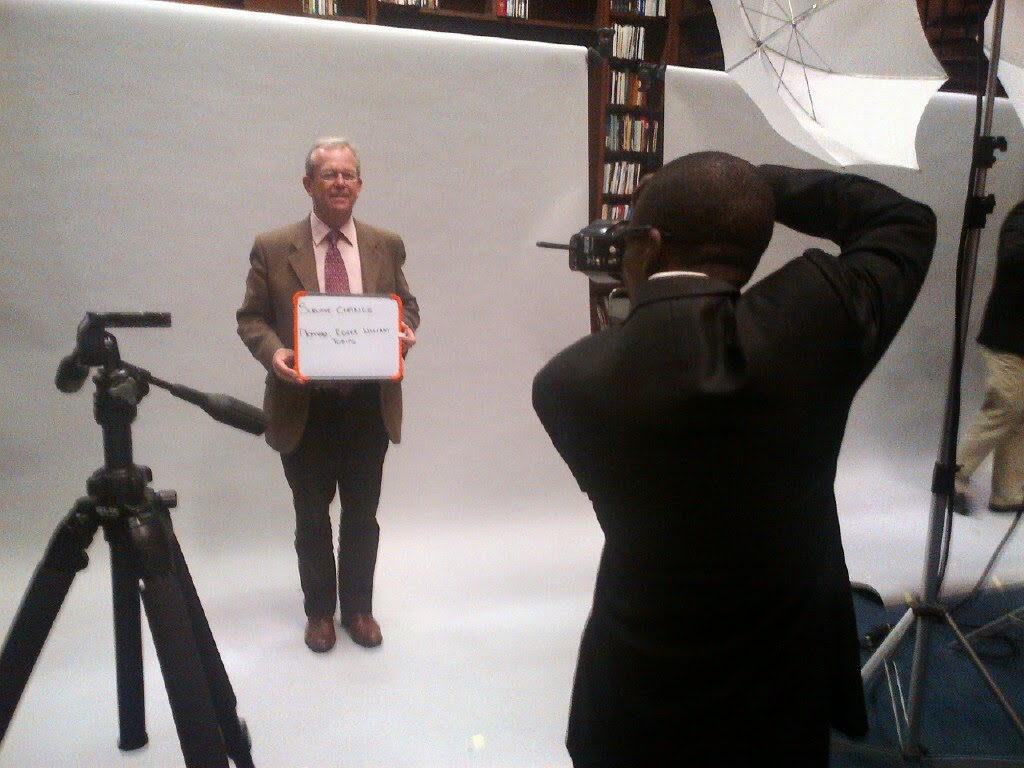 Registration began with our passing through the Visitors' Entrance off Plein Street, showing our ID books and filling in a form to gain entry. We were escorted through a series of rooms where very courteous staff captured details into a database and issued one form of documentation or identity or another. I got my library pass, applied for IT training if I needed it, filled in forms for medical aid, pension and salary and confirmed our attendance at both the swearing in ceremony tomorrow and the Presidential Inauguration on Saturday. Diana got her invitation to attend the swearing in in the gallery of the National Assembly. She will be keeping an eye out for the Carte Blanche film crew who have been commissioned to film the day's main events and get some interviews. Apparently what they are most keen on is getting Julius Malema on camera as a newly installed MP. 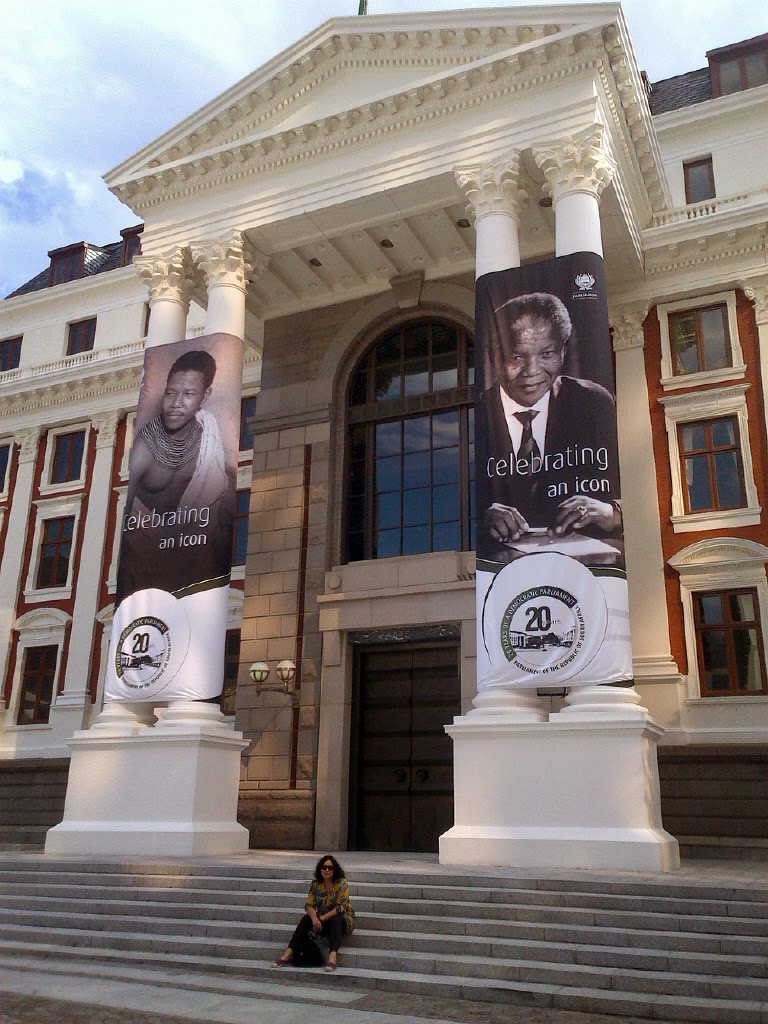 The funniest part of the morning was the mug shot taken in front of a white sheet, holding a board with my names on it, my freshly powdered face staring blankly at the camera as Diana looked on. The whole thing reminded me of my first day at school - all these unfamiliar places, people and experiences that would soon be my workplace for the next five years. What they intend using these photos for is anyone's guess.

Later, I met some of my soon-to-be colleagues, all from the Western Cape - James Vos, currently in the WC Legislature, Geordin Hill- Lewis, Helen Zille's Chief of Staff and an MP since 2012, and Gavin Davis, the DA Director of Communications. James looked just as bemused as me with the whole process. Each of us was handed a glossy file with information we needed about becoming an MP, the programme for the next few weeks and the rules for electing the President, Speaker and Deputy Speaker. All very efficient and professional. 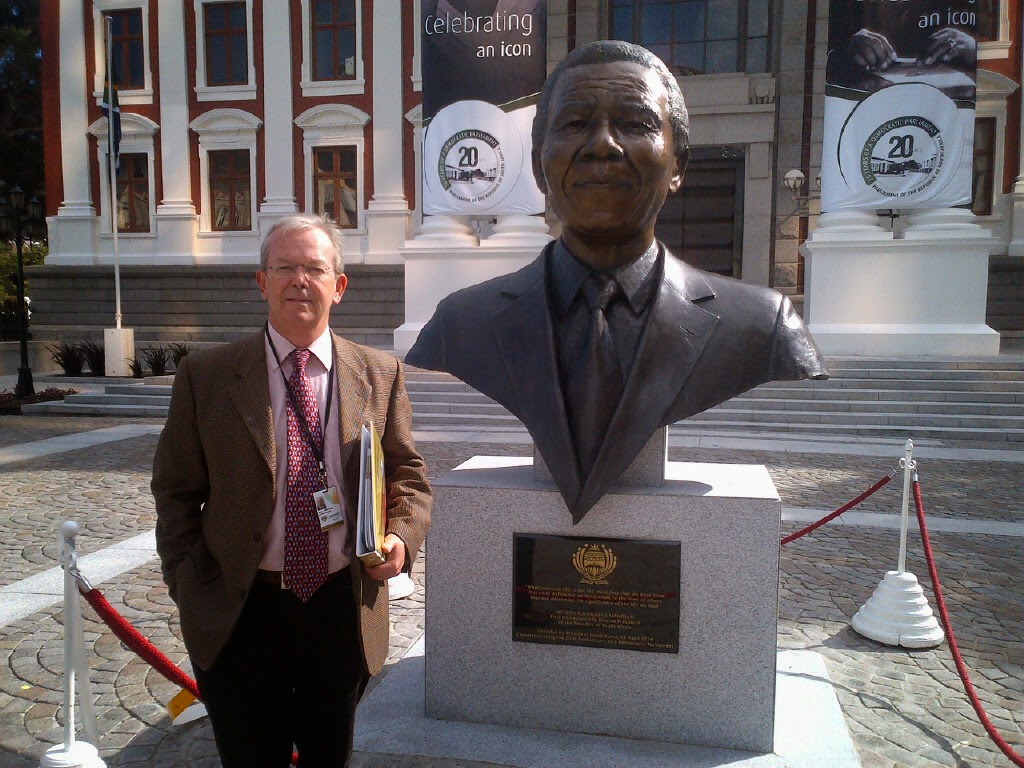 When it was all done we stepped out into the open air and wandered through the Parliamentary precinct on a lovely warm, sunny day - made so by the berg wind that threatens rain on Wednesday. We walked up to the bust of Nelson Mandela in front of the neo-classical steps and portico of the new Assembly building and took more photos. We couldn't help feel we were treading in the footsteps of greatness, a very humbling experience.

Then we ambled back through the Visitors' Entrance and on to see Seton Bailey at Film Afrika just up the road - Diana is doing a programme on an ex-convict Seton is training as a cameraman.

Now why the Power of 10? Here's why: I am not into numerology but Diana is and she says 10 is a very powerful number.
Make of it what you will. In deference to Diana, for now I have a greater reverence for symbolic numbers.

At around 5 pm we checked into the Cullinan Hotel opposite the Cape Town International Convention Centre, which along with two other hotels is where all MPs have been put up for three nights. It felt very odd, with nothing much going on, so we went down to the patio and had a drink as people drifted in and out. Then Ian Ollis, my MP from Sandton, arrived, and later Mike Waters from the East Rand, so we chatted about the current state of the party and what to do about the leadership dilemma. The caucus meets on May 29th to choose the new leader and nominations have yet to open. It's been a big mess, with party leadership giving out contradictory messages since Lindiwe resigned a more than a week ago.

The sociable part of the day ended in the Peach Tree restaurant where dinner was served in two shifts. We chose the earlier one and found ourselves sitting next to Strike Ralegoma, former Mayoral Committee Member for Housing in the City of Joburg, with whom Adele and I had dealings some years ago. We recognised each other and he asked what was going to happen to the Soweto Festival? I explained it was in the safe hands of Rehaad James at ALP. Then along came Amos Masondo, former Mayor of Joburg, who I last saw in Luthuli House in August. Yes, it's quite unusual for would-be DA MPs to be seen in Luthuli House (the ANC headquarters) but I was not even a candidate then. I was there for a meeting with Mathole Motshegka to discuss a possible partnership between the Soweto Festival and his Kara Heritage Trust. Mathole and his wife Angie, Minister of Basic Education, go back a long way with Adele so I was able to pick up the phone and call him for a meeting.

The funny thing is, through my work at ALP since 2005 I probably know more ANC than DA MPs. There are sure to be some surprised expressions on both sides as we walk tentatively through the corridors of power tomorrow.
Posted by Toby Chance at 05:39