Presidential inauguration - hurry up and wait 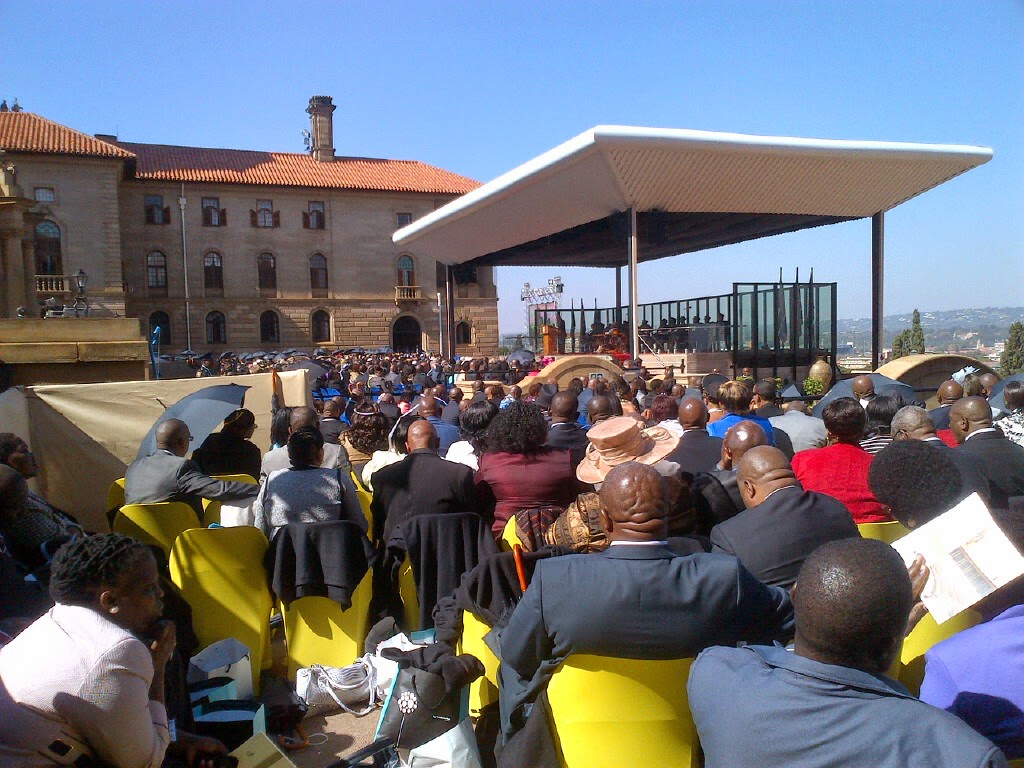 Here is a summary of yesterday's Presidential Inauguration, which Diana and I attended and which rounded off an extremely eventful week and a bit for us:

There was much umming and erring before we eventually chose to stay at the Holiday Inn Sandton on Friday night. It meant getting up at 3:45 am and crawling downstairs to catch the bus to the Maslow Hotel at 4:40, rather than getting up at about the same time and driving the 20 minutes to the Maslow. Not much to choose between the two, but in any event we were on the bus to Pretoria at around 5:20, twenty minutes behind schedule. Having spilled coffee down my shirt and tie I was not in the best of moods, but everyone was very upbeat and chatty so my temper improved - more so when the stain dried leaving it barely visible.

This was my first experience of a blue light brigade, and I must say it did speed things up, even at that time of the morning. I don't approve of them in principle, except for visiting heads of state and that kind of thing. They are totally inconsiderate of other drivers. But it was a smooth ride and the sun was just rising as we arrived at the Union Buildings, every street nearby blocked by police cars. Our driver, though, had not been properly briefed, for we waited at the east entrance for 15 minutes before turning around and going through the west entrance. Ours was among the first of over 80 buses to arrive, and we were shown to our seats - yellow coded for Members of Parliament - exactly adjacent to the inauguration structure. Diana and I and a few of our DA friends found seats right next to the balustrade separating us from the next level up the amphitheatre, giving us some shade and allowing us to stand without blocking the view of people behind us. 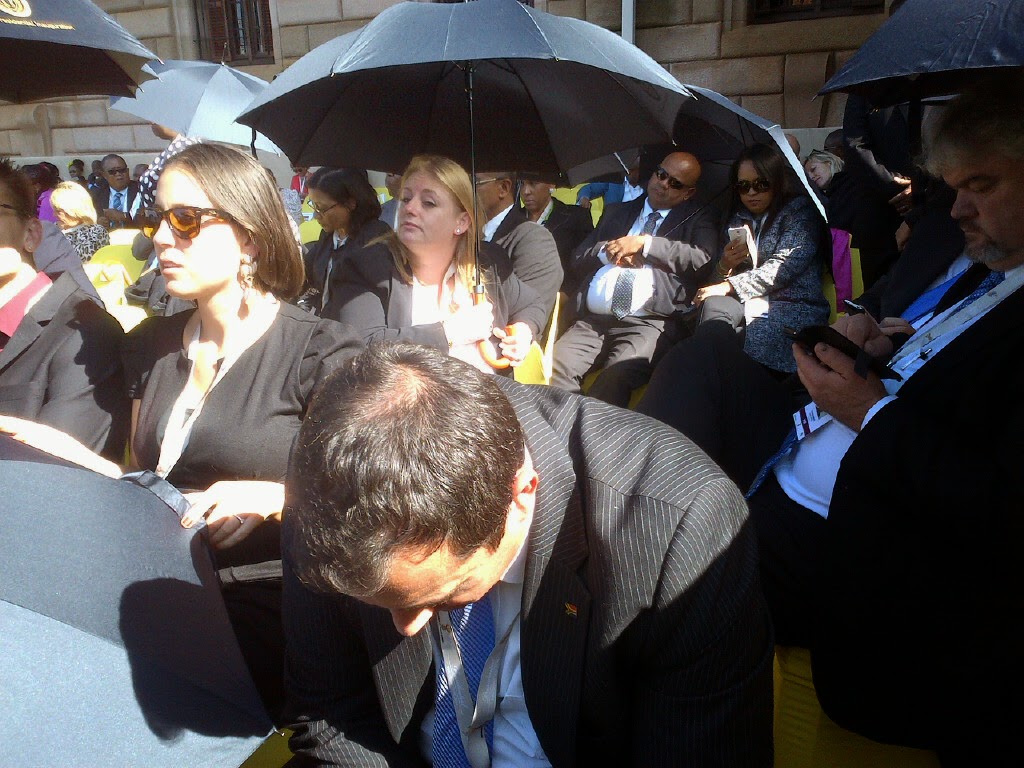 Then set in a five hour wait, which we occupied by wandering around greeting people we know, nibbling on the meal packs we picked up at the hotel, fiddling with our mobile devices or just sitting and watching proceedings. We were all provided with umbrellas which came in very handy as the sun rose overhead and our skins reddened. On my tours around the amphitheatre I chatted to all manner of people, including Parks Tau, mayor of Joburg and his wife Pili who's CEO of the Gauteng Enterprise Propeller, and Thami Mazwai, who has just retired as Chairman of the W&RSETA and consultant on small business at Wits. 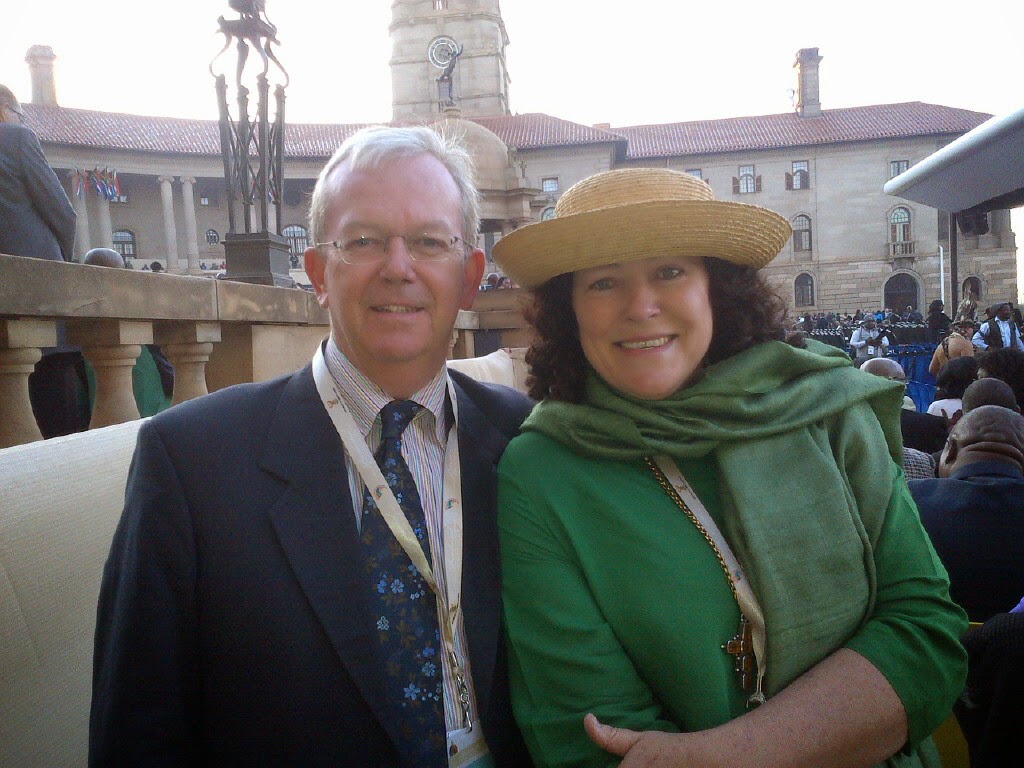 The Union Buildings are a fine example of British colonial monumental architecture, designed by Sir Herbert Baker and built to commemorate the establishment of the Union of South Africa in 1910. Completed in 1913, the two wings symbolise the reconciliation between the British and Afrikaners while the amphitheatre is a metaphor for union of the two. They are the seat of the South African government, home of the Presidency, Deputy Presidency and Cabinet Office, and venue for many state occasions such as the one we were attending. In South Africa, the head of state is also the head of the government - like in the USA. The White House is where the President lives and also the venue for the cabinet office. In Britain it's different - the monarch is head of state and resides at Buckingham Palace, while the head of government - the prime minister - lives and works at Number 10 Downing Street. A few blocks away from the Union Buildings is the Bryntirion Estate, where the President's official residence and those of the cabinet and deputy ministers can be found. 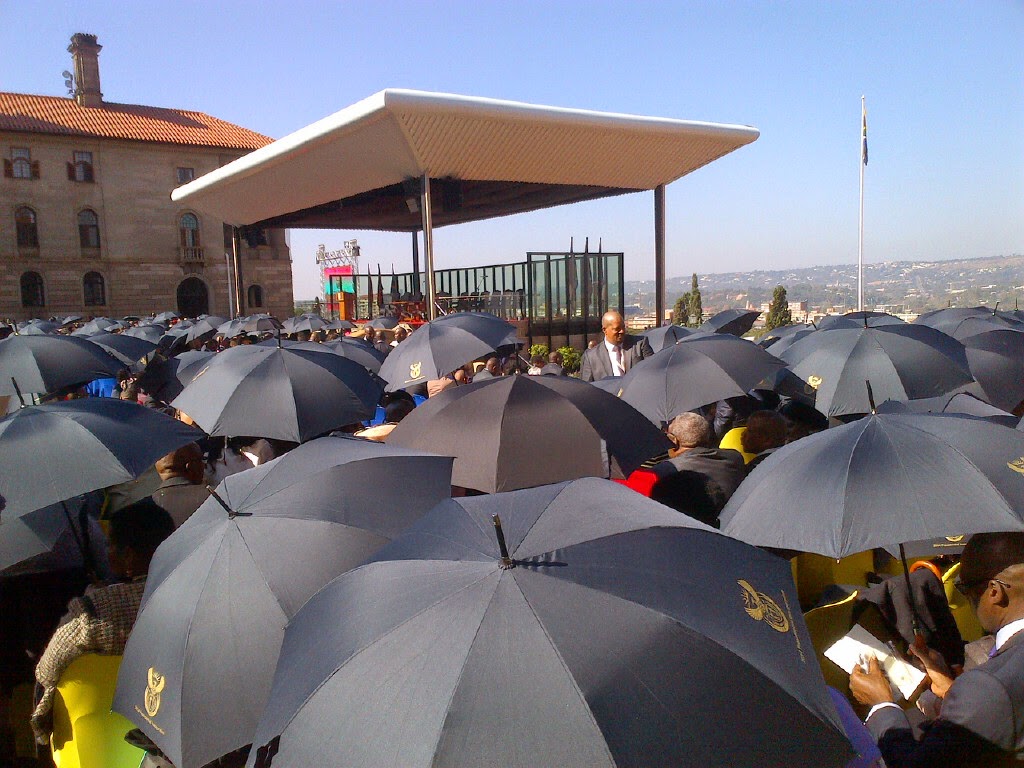 The hours of waiting were punctuated by some singers and then announcements by Minister Jeff Radebe and ANC Deputy Secretary General Jesse Duarte of arriving dignitaries, who were welcomed with varying degrees of enthusiasm by the crowd. The biggest cheers were for Thabo Mbeki and his wife, and Robert Mugabe, who arrived just a few minutes before the ceremony began. It's amazing how this tyrant, who bankrupted his country, is revered by black South Africans. His status as a liberator who gives the finger to the West is deeply embedded in their folk-law. Something us Democrats can't quite get our heads around. 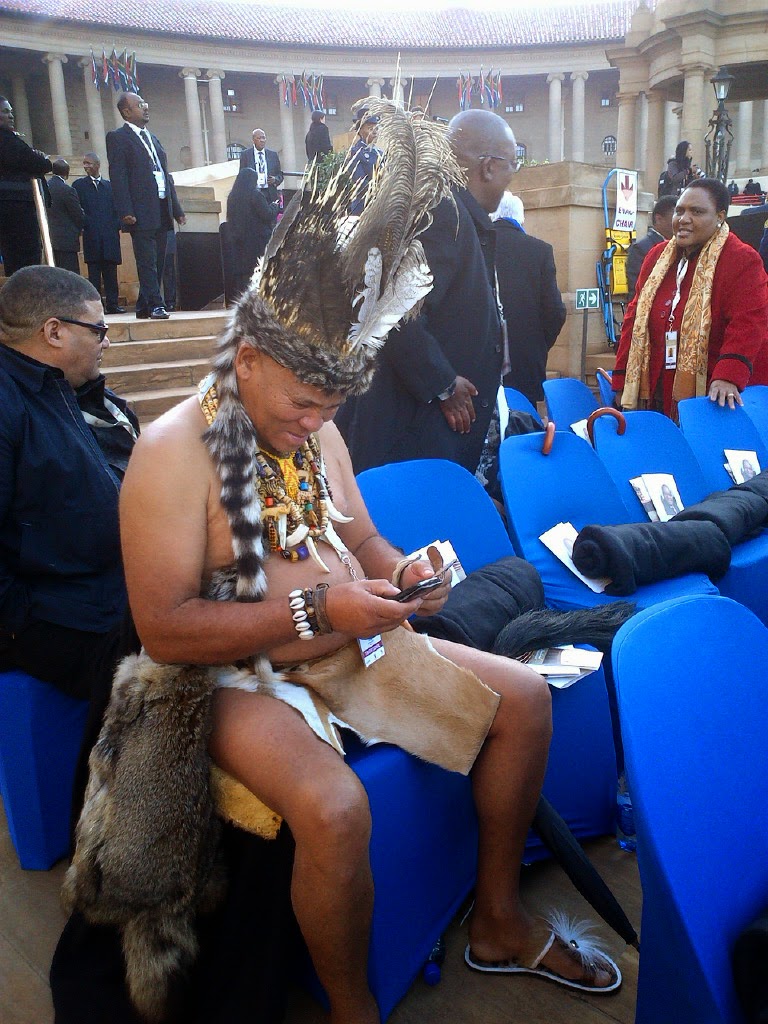 The ceremony itself went off without a hitch. Chief Justice Mogoeng Mogoeng officiated, swearing in Jacob Zuma for his second five year term, after which Zuma took the podium and stunned our segment of the amphitheatre with his determined references to state control and the focus on the second phase of democratic transition - radically transforming the economy. Zuma was explicit - more BEE, more affirmative action, more inclusive growth. What this means is that he has been captured by the left of the ANC-COSATU-SACP alliance. He clearly sees the threat coming from the EFF and a breakaway party to the left, not from the DA and the forces to the right (though Helen Zille would argue that the DA is not to the right). But will he, as before, speak left and act right?

There is no appetite from the right in the ANC (that is, those who support the NDP and liberal economic policies which free up the private sector, reduce red tape and liberalise labour laws) to break away. The threat comes from Numsa and its allies who are threatening a new workers party. Unless the ANC makes big concessions to them, the new party is almost certain to materialise. But will Zuma's strategy be enough to head off that threat? He might get the worst of both worlds (from an ANC perspective): leftist policies which put a clamp on economic growth, but which don't go far enough to appease the left. This is the opportunity for the DA to exploit as we approach the local elections in 2016. 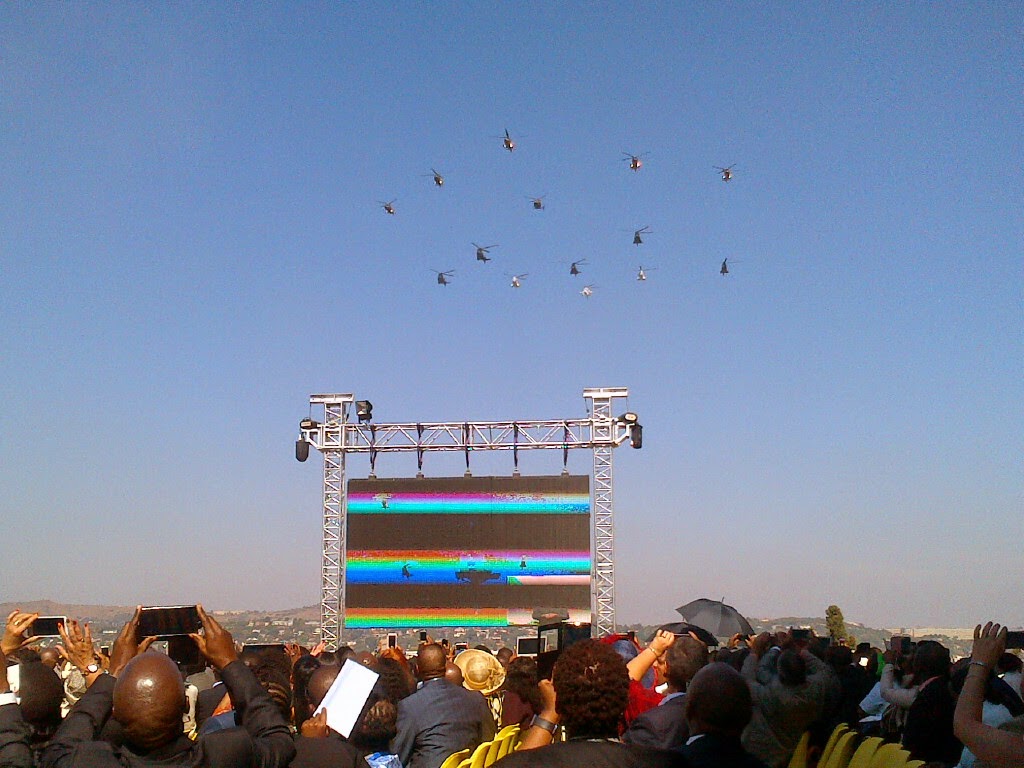 The best part of the day was the air display by the SA Airforce and South African Airways. Helicopters, Gripen jets fighters, Hercules transports and an Airbus A340 took part in successive manoeuvres which drew huge cheers from the crowds.

When the excitement died down and the MC started the laborious process of managing a dignified exit for the 4 500 guests, Diana and I made a quick exit for the loo, and soon found ourselves on a shuttle bus which arrived at the head of the queue at Brintiron estate, so we found a cocktail table and a G&T and settled down to the next phase of the festivities. The building was an enormous steel-supported dome seating several thousand people, with 6 feeding stations which functioned very well as people poured in. 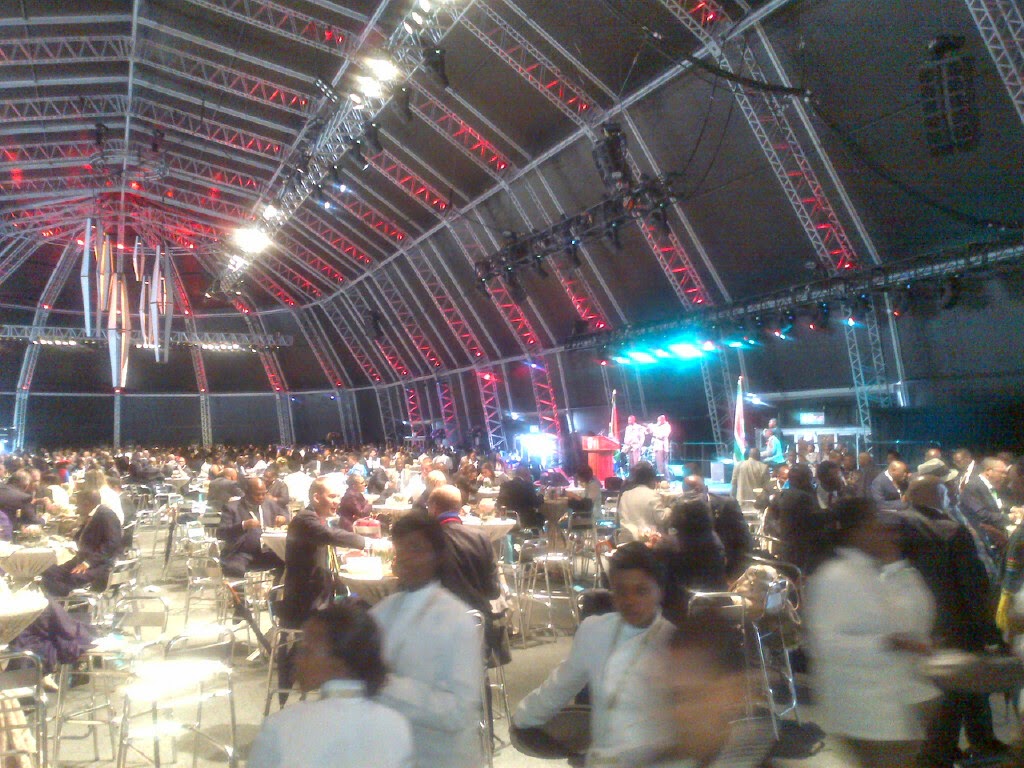 Close by were Trevor Manuel and Maria Ramos, Cyril Ramaphosa and his wife Dr Tshepo Motsepe (Patrice Motsepe's sister, who along with Bridget Motsepe, Jeff Radebe's wife, make up a powerful family triumvirate), Naledi Pandor, Pravin Gordhan, Ebrahim Patel, Rob Davis, Marthinus van Sckalkwyk and other cabinet ministers, most of whom were hiding their nerves in advance of the new cabinet announcement today. 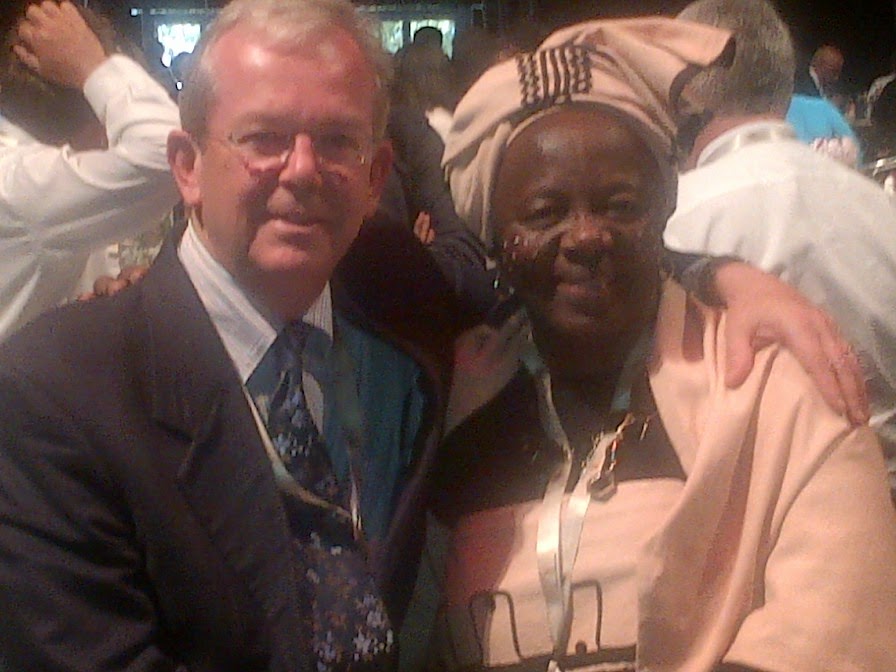 As we feasted on lunch we were joined by Marius Redelinghuys MP and his partner, and fellow newly elected MP Nosimo Balindlehla whom we nomiated on Wednesday as our candidate for Speaker. She is a delightful lady, very colourful and warm. She told me she had decided to join the DA over a year before it was announced, but Helen Zille had advised her to wait until she was absolutely sure. Sure she certainly is. It will be interesting to see what impact she has on the caucus and whether she can bring significant support from the Eastern Cape.

We were keen to make an early exit and managed to get onto one of the first buses home at around 4:30. We arrived at the Holiday Inn in time to collect the car and fetch Josie our Staffie just after dusk and fall into a chair to watch the last half hour of the Stormers' crushing defeat of the Cheaters in the Super 15 rugby tournament.
Posted by Toby Chance at 07:45