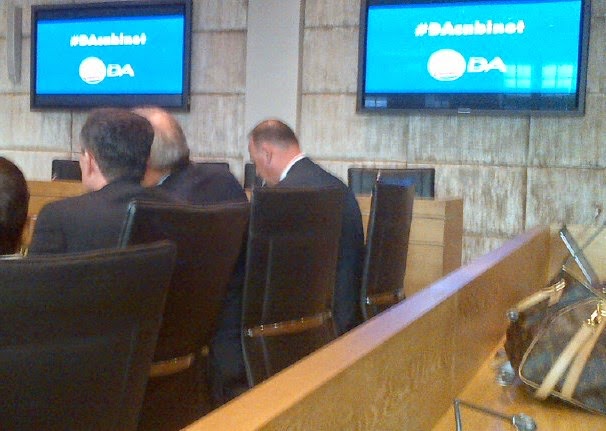 Today I was appointed Shadow Minister for Small Business Development in Mmusi Maimane's first shadow cabinet. My deputy is Hendrik Kruger who hails from Emalahleni (formerly Witbank) in Mpumalanga. Like Mmusi's other appointees, I received his letter while sitting in the DA caucus meeting this morning, just as Helen Zille was addressing us. It came as a big shock, but a very welcome surprise nevertheless. As the DA has been saying for many months now, the most important issue facing the country is how to get our economy moving again so it can create jobs, and so lift millions of people out of poverty and desperation. The spotlight will fall on the Small Business Development Ministry for it is tasked with creating the conditions for small businesses to emerge and thrive. The National Development Plan estimates that 80% of new jobs will come from small business. We have a massive task ahead.


This week has been taken up with training - or "onboarding" as Parliament likes to call it - and getting ready for the work ahead. The training was conducted in the Old Assembly Building, a handsome chamber modelled on the British House of Commons. Members sit on green leather upholstered benches in pairs, in front of oak desks equipped with microphone, speakers and a drawer. It has a more intimate feeling than the New Assembly, one gets a sense of belonging to another era. The building has seen some dramatic events, including the assassination of Prime Minister Hendrik Verwoerd in 1966 - the mark from the dagger used to kill him can still be seen on the desk where he sat. 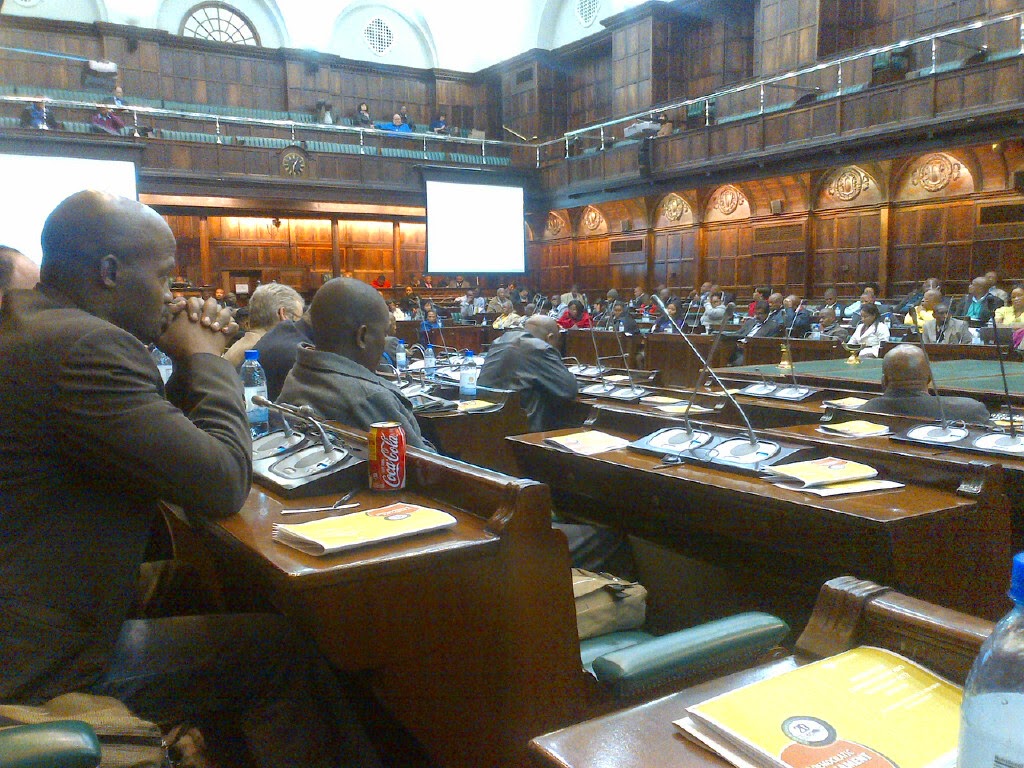 The press have made much of the package of salary and benefits given to MPs, claiming it is excessive. I admit it is substantially higher than the average South African salary, but falls way short of what an executive in even a medium sized business would earn. All told an MP comes out with around R40 000 after deductions (pension, medical aid and a few other things), out of which we have to pay for our own motorised transport in Cape Town and in our constituency. MPs do a lot of driving, especially those in rural areas. One DA MP told me he clocks up around 3 000 km a month, which in petrol alone is over R5 000.

Then we get a lot of stick for the 86 free economy flights paid for annually by the taxpayer. But people forget - Parliament is in Cape Town, most MPs live far away. How are we supposed to do our job without travelling back and forth to Cape Town when Parliament is in session? We are here for around 8 months of the year, call it 35 weeks, and we have to commute so we don't ignore both our families and constituency work at home. That's 70 flights. The rest can be used by our spouses or are available for doing party business when Parliament is not in session, or for other political business we have to attend to. Again, were we commuting business people our company would pay. Flying is not fun, it's tiring and time consuming. Yes, the air miles are a perk, but that's about the only one.

The same can be said about our ICT allowance. We get a cell phone, laptop and tablet, with upper limits to monthly data and voice usage. As the Parliamentary official outlining the package said, being an MP is all about communication. Without the tools to do this, we would be helpless. So I make no apology for what we get.

I guess the best way of putting it is that we are the middle management of South Africa Inc, with the Cabinet being the top execs. We are answerable to all South Africans, especially voters and taxpayers, to whom we need to account for all our actions and terms of employment. They are the shareholders, so to speak. An in an organisation with 55 million "employees" with a turnover of some R3,8 trillion, you would expect the management to cost a bit. Our duty is to make sure our shareholders get value for money, which is why we need to pitch up for work and take our responsibilities seriously. Parliament is getting tougher on absenteeism, as it should. With television cameras on all the time in the House, we should make sure attendance is high and we are not nodding off to sleep, even when other Members drone on. 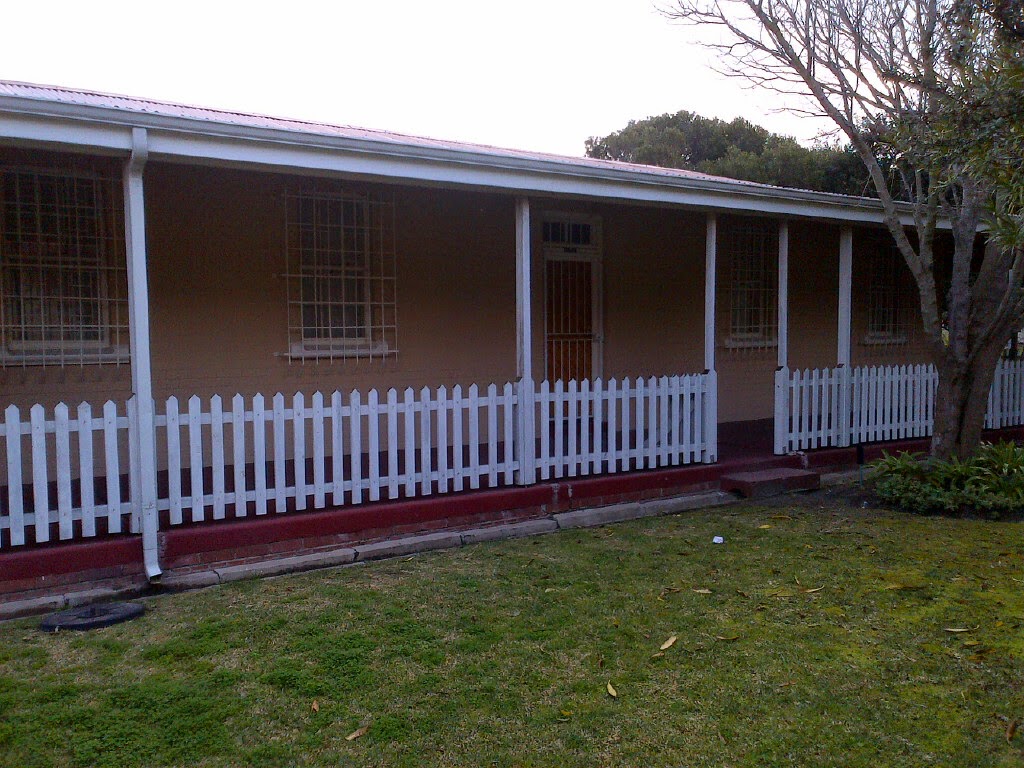 The final bone of contention is the housing situation. MPs are accommodated in one of three Parliamentary villages located about 15 km from town. Most of the DA MPs have been put up in Acacia Park, which is a former air force barracks. I took delivery of my house yesterday, and signed a lease for the princely sum of R187 per month. For this I get two bedrooms, a hall, bathroom, kitchen and sitting room - furnished, but without kitchen equipment, bedding, TV etc, all of which we are expected to buy using a once-off relocation allowance. I promise you the allowance is reasonable, not excessive, and it soon gets eaten up. There is no provision for wear and tear over the five year Parliamentary term so we have to look after our stuff. This is not luxury accommodation, but it's clean and liveable. Again, as a member of South Africa Inc's management team living away from home I would expect to be put up somewhere. This is not the Ritz Carlton by any means.

So onto my new job. All the DA MPs were interviewed by either Mmusi, John Steenhuisen or Anchen Dreyer, and we were asked to complete a skills audit and list our top three portfolios in order of preference. These informed the decision on the shadow cabinet and deputy appointments. None of us knew what we'd been given until the caucus meeting this morning, when we got the letters by email and Mmusi read out the appointments. My Sandton colleagues did well, with Ian Ollis returning to the Labour portfolio, Gordon Mackay getting Energy and Patrick Atkinson Economic Development. There were some obvious choices, such as Glynnis Breytenbach in Justice and David Maynier back in Defence. At the press conference held at 1:15 Mmusi was asked about the lack of racial representivity in the appointments, which he denied in emphatic terms. The DA is by far the most diverse party in Parliament, in age, gender, race and experience. We have everything to be proud of in this respect.

The entire party is motivated and raring to go. The last thing to be sorted out is our offices, which should be done by early next week. Then we can get down to work.
Posted by Toby Chance at 10:19