Remember, we have children too 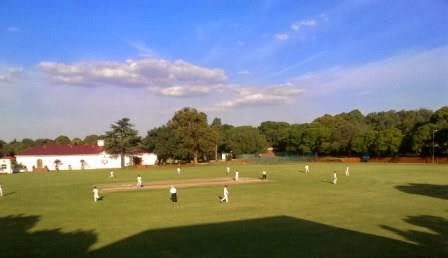 On Monday I spent an enjoyable couple of hours watching a game of cricket between a visiting 11 from Eton College in England, and St John's College Johannesburg. This was at the invitation of the Old Etonian Association, of which I have been a member since 1978. When I left the game just after tea Eton were getting a drubbing at the hands of some skillful and aggressive St John's batsmen and bowlers. By then the conversation had  turned to the relative merits of a private school education.

What is it about cricket that so defines the English, and why have the rules and traditions that underlie the game been adopted so thoroughly by a school system itself inherited from the old country? It has often been said the English (or more properly the British) invented competitive sports and exported them around the world during the zenith of the British Empire in the 19th century. The quotation wrongly applied to the Duke of Wellington, that "the Battle of Waterloo was won on the playing fields of Eton", nevertheless sums up the admiration the ruling classes - and the French - had for that peculiar British institution, the public school (which, being irrationally British, is in fact private) and its focus on manly pursuits on the sports field. It's easy to tease the English about their lacklustre performances of late, less easy to gainsay the impact sport has had on popular culture and the importance countries place on it as a measure of national prestige.

Perhaps a more fundamental question concerns the role of private education in South Africa today, when the goal of equality of opportunity for the many sits uncomfortably with privileges defended by the few. Eton and St John's are private schools, meaning they are run by independent boards of governors, set their own admissions policies, hire and fire their teachers, decide their own fees and budget, and choose which examinations their pupils sit - pretty much like a private business, in other words.

In a free enterprise society private ownership is not only not forbidden, it is encouraged as it has proved to be the most reliable creator of wealth which elected governments rely on to redistribute to the poorer sections of society. Why do private schools arouse so much hatred among the ultra-left, then? Is it because of their perceived perpetuation of privilege down the generations, their high fees which are a barrier to less well-off parents of gifted children, or for being a breeding ground for people of centrist or right wing political viewpoints?

Let me emphasise that I believe education should be compulsory from the age of 5 to 16, and the state should be the default provider of this education. But parents should have the right to opt out and buy private education for their children.

It's good sport for those of us who defend private education (and healthcare) to see its opponents writhing in discomfort as they try to explain why they send their children to private schools and belong to a medical aid so they can benefit from private health facilities. As I was having a laugh over this with one of the St John's parents, he told me of a discussion he had with Chris Hani in 1993 when he asked Hani, would the ANC retain private education? Hani replied, "of course, remember we have children too."

This statement, from the leader of the SA Communist Party, is such a double standard as to be indefensible. Or is it? Hani was noted for this forthright views. Perhaps he saw the value of quality, and the right of an individual to choose it over mediocrity. This is not to say all public schools and public hospitals are poor quality. But if you ban private education and healthcare, what incentive have the public versions to attain the highest quality?It would be fascinating to have a follow-up discussion with Hani on this.

Today's Business Day reports private education provider Curro is funding a R1,5 billion expansion of its low-cost schools model. This shows there is demand for private education among South Africa's growing middle class. Though Curro schools do not have the tradition or grandeur of an Eton or St John's, the principle is identical. Give consumers - parents - a well priced quality product which does not break any law and they should be free to purchase it.

Several countries are pursuing hybrid models of public/private education, notably Britain where the Coalition government is pushing free schools and academies. The 'free' schools are free of interference and management by local authorities, which have become politicised and have tended to side with teachers' unions at the expense of parents and boards of governors. Arguably, the intransigence of teachers in South Africa is one of the reasons so many of our schools are dysfunctional. It's in this context that DA leader Helen Zille applauds Education Minister Angie Motshekga for her efforts to bring them down to size.

In South Africa, one of the most encouraging developments is the National Education Collaboration Framework, an attempt by the private sector (supposedly led by FirstRand CEO Sizwe Nxasana) to encourage the Department of Education to re-think education policy and delivery methods in the interests of rescuing our defunct education system. In a remarkable sign of round-table commitment, business, government, unions and civil society are trying out new ways of improving quality at affordable cost, applying corporate CSI budgets which otherwise would have been spent on piecemeal educational projects.

This initiative could become a model for co-operation in other sectors of the economy and so help rid the country of the adversarial style of doing things that can be so destructive of goodwill and creativity.
Posted by Toby Chance at 05:54