On Friday I attended a very inspirational short seminar organised by the National Small Business Chamber (NSBC) at The Forum in Bryanston, sponsored by Absa. The theme was "Think beyond a job, create your own." In other words, how do you move from an employed or unemployed mindset to an employer or self-employed mindset and then put it into action? With the unemployment rate in South Africa reaching crisis proportions, this is a question on everyone's lips that demands urgent and effective answers.

After coffee and some delicious breakfast snacks, and snatching brief conversation with strangers, the 400 or so of us were directed to a capacious auditorium where we waited expectantly for the session to start. I swapped business cards with some of the people sitting close by and looked around to see if I recognised anyone. Nobody so far. Something that struck me was that the audience was a total reflection of South Africa's demographics - a sign that entrepreneurship defies attempts at racial bias. 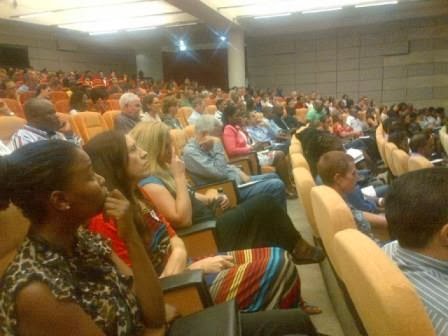 Then entered Mike Anderson, founder of the NSBC, who took us through his recipe for greatness in the challenging and difficult world of being an entrepreneur. Just to make us more insecure than we already felt, he pointed out that 90% of businesses fail within the first three years and posed the question - how were we going to make sure we belonged to the 10% that succeed?

Inside our carrier bags handed out on arrival was a glossy red booklet with his ten-step recipe for achieving greatness, which he proceeded to elaborate on his his hour-long talk. They say dynamism comes in small packages and Mike is certainly one of them - a successful entrepreneur who has tasted failure and come back a winner, and has now dedicated his life to helping others to succeed. There is nothing magical about his formula, and here it is:


At the break I bumped into Nomhle Ndlovu, who has recently left a comfortable job as Director of Talent Management at the Gauteng City Region Academy, part of the Gauteng Department of Education, to start a business manufacturing steel fencing on the East Rand. Nomhle is a redoubtable lady and brought along a young friend, Thandi, who she was mentoring. I met Nomhle when the GCRA became the education partner of the Youth Zone at the Soweto Festival Expo back in 2008, and they renewed their partnership again last year. She has some firm opinions on how to unlock the entrepreneurial potential of those countless South Africans with the will to succeed but who are forever put down by a government more interested in shoring up support with its union allies.

During our conversation I pondered on another recipe for success written by someone with a very different background to Mike Anderson's, which Nomhle and I had discussed on many occasions and agreed was highly relevant to our circumstances as a country. The writer is Stedman Graham, who apart from being Oprah Winfrey's life partner has established himself as a respected life coach, trainer and entrepreneur. I am privileged to be able to call Stedman a friend, and we meet up during his frequent visits to this country which he and Oprah have a deep commitment to.

Stedman's book on Identity re-states his 9-Step Success Process, published over a decade ago, in a new context, placing a person's sense of self at the heart of achieving success in life. Here are the 9 Steps:


Notice the similarities to Mike's recipe? The common elements include the starting point, which is self knowledge and self belief, or as the Delphic maxim expressed it "know thyself". This is where Stedman's focus on identity becomes interesting, especially in South Africa. Most of us in this country have had our sense of identity moulded through years of race discrimination, either negatively if we were born black or positively if we were born white. We interpret our identity through a racial lens. Even Lindiwe Mazibuko, Parliamentary leader of the DA, refers to herself as a black South African woman.

It is impossible to ignore race as a definer of identity, though we must not regard it as THE definer. Liberal ideologues regard the DA's acceptance of the need for redress using race as a criterion as a cop out. A more pragmatic approach, which I accept, recognises race as a factor in all aspects of life in this country and tries to mitigate it, with the eventual aim of eliminating it as a factor.

Both Stedman and Mike are passionate about helping others become self-actualised individuals, who can achieve greatness or success in life irrespective of an identity imposed on them from outside. For them, the key is to plot a course in life from a foundation of self-belief. I find it significant that both Mike and Stedman mention the importance of surrounding oneself with like-minded people (steps 9 and 7 respectively) and of taking action (steps 8 and 8) to maximise the chances of achieving greatness or success.

How many of us have the self-discipline to internalise this wisdom and apply it in our lives? If more South Africans did so we would achieve greatness as a nation a lot faster, and avoid many of the destructive clashes of racial nationalism and prejudice that hold us back.

Wouldn't it be great if Mike and Stedman's message could be taught to each and every one of us in this troubled but beautiful country? The NSBC has over 70 000 members which is a good start. The message should be taught in schools as part of Life Orientation and carried through into tertiary institutions, youth clubs and corporate training programmes. I am convinced it would have a big impact on our efforts to reduce unemployment - both through job creation in the corporate sector and self-employment by entrepreneurs.

The DA's vision of an open opportunity society for all embodies everything Mike and Stedman are saying. We must make more of an effort to make it happen.
Posted by Toby Chance at 03:07