The Sunday Times published this notice below. High Time! 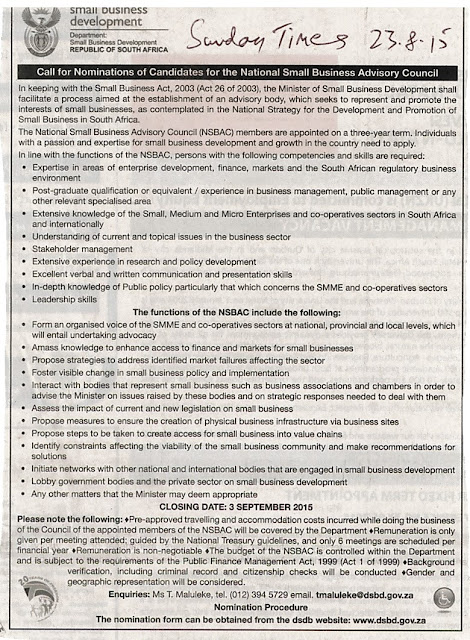 I have submitted Parliamentary Questions to the Minister asking her to give some important additional information related to the appointments. I will publish the answers on this blog - don't hold your breath!


1.       With reference to the call for nominations of candidates for the National Small Business Advisory Council, published in the Sunday Times on August 23rd,

a.       why has it taken fifteen months since the Department of Small Business Development was formed for the call for nominations to be published?
b.      how many Council members does the Minister intend appointing?
c.       what proportion of Council members will be appointed from government, business and civil society?
d.      who will make up the adjudication panel for making the appointments?,
e.      when will the appointments be announced?; and
f.        what will Council members be paid in addition to their travelling and accommodation costs?
Posted by Toby Chance at 03:03 No comments: 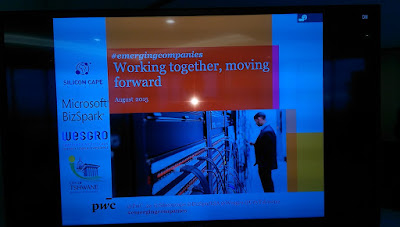 Yesterday I attended the launch of the PWC survey of South Africa's emerging companies and entrepreneurial landscape in 2015. It was attended by the great and the good in Cape Town's entrepreneurial ecosystem, as well as a smattering from Gauteng. The breakfast event, and survey, were sponsored by Silicon Cape, Microsoft BizSpark, Wesgro and the City of Tshwane.

You can read a report on the event on Fin-24 - I sat next to  journalist Matthew le Cordeur and he kindly did an interview with me afterwards. Tim Harris, CEO of Wesgro, was due to give the keynote address but was sick so Lance Greyling stepped in at the last minute. Lance, formerly an Independent Democrat then a DA MP and Shadow Minister for Energy, was appointed earlier this year to the Mayor's Office to spearhead investment and development in the City of Cape Town.

The survey is a goldmine of information and I can only cover a small fraction of the findings here. For those interested in the full survey, contact Maija de Rijk-Uys, Senior Manager at PWC who led the project, at maija.de.rijk.uys@za.pwc.com or call her on +27 21 529 2740. 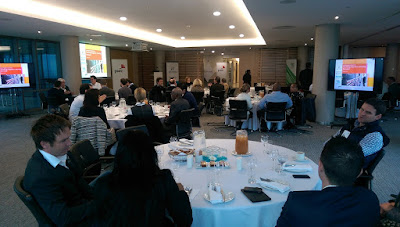 There were 743 participants of which 534 took part in the online survey. 58% of respondents weren't part of any start-up support programme, while 30% were involved with Microsoft BizSpark.

85% were emerging companies, 12% other ecosystem stakeholders including government, tertiary institutions, incubators and accelerators, while 3%  were investors.

The survey exposed some myths that have crept into the ecosystem. 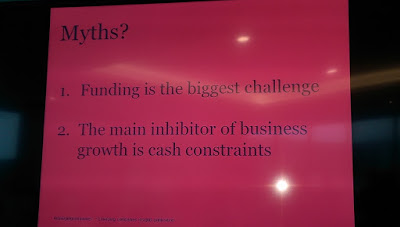 Myth # 2 is that the main inhibitor of business growth is cash constraints. According to the respondents, this myth is in fact true with the following factors cited in descending order of importance: 1. Cash constraints; 2. Working capital; 3. Talent/skills shortage; 4. Regulatory burden/red tape; 5. Long sales cycle.

When it came to sources of funding, 81% of respondents had never applied for government funding opportunities, while incredibly 40% were not aware of any government funding opportunities available to them. The report states: "The majority of funding applications were not successful, with the majority of fund seekers having tried to perform the funding administration without professional help."

Of the 19% of respondents who have applied for government help, 50% applied to the Industrial Development Corporation and 50% to the Technology Innovation Agency.

The top three reasons for not applying for funding were: 1. Unaware of any opportunities (41%); 2. Administration burden; length of application process/red tape (28%); and 3. Not eligible for any incentive schemes (19%). 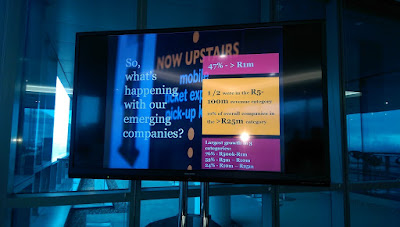 This begs the question: where is the Small Enterprise Finance Agency to be found, and why are government finance schemes not more accessible?

Myth # 3 is that red tape is stifling SMEs. The survey found that although red tape was cited as a growth inhibitor by entrepreneurs, it only ranked fourth out of ten as a growth stopper, with only 9% of respondents choosing this option.

The reports goes on: "On average 8 working days per month are spent by companies dealing with red tape. Even though our respondents didn't rank red tape as their primary growth inhibitor, this figure brings into question the opportunity cost of dealing with regulatory compliance and how much more successful SMEs could be if they could plough these additional hours into developing their businesses."

On the matter of raising capital, 43% of respondents did not raise capital in the last 12 months, but plan to do so in the next 12 months. On future funds to be raised, the sources are: 1. Family and friends (15%); 2. Angel investors (13%); 3. Venture capital/private equity (20%); and Other, including enterprise development, government agencies and corporate backing (52%).

It is worth repeating here that 30% of respondents are involved in BizSpark, Microsoft's enterprise/supplier development programme which aims to align to the BBBEE scorecard. As a wholly international-owned company, Microsoft will not sell any equity to local black investors so has to develop an equity-equivalent scheme instead. 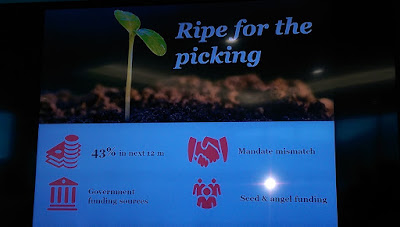 At a meeting I had with the BizSpark team at Microsoft's headquarters in Bryanston in March, I learned that the company had teamed up with the Jobs Fund. After some initial very expensive incubation of small tech businesses, it shifted to the virtual incubator model. This reduced the cost of each job created from R122 000 to R34 000. Microsoft appoints a portfolio manager to facilitate a group of incubates, who are provided with mentorship and training. At the time of my meeting they had 200 businesses in the portfolio, which is close to their proportion of the total number of respondents in the PWC survey.

So we are talking about a very specific sample of businesses here. It is an important segment of the total emerging business landscape, but more research is needed to include businesses in other sectors such as agriculture, manufacturing, tourism, finance, retail/wholesale and other services.

This is something which the Department of Small Business Development should be focusing on. We actually know very little about our small business ecosystem, which includes the informal sector. The informal sector, which "employs" anything from 2 to 4 million people, is a big mystery to most people dealing with accelerating small business but it cannot be ignored by policy makers (see a well thought out piece by Zama Ndlovu in today's Business Day).

The PWC Emerging Companies survey adds measurably to our understanding of South Africa's small business ecosystem. But is is a dipstick sample and needs massive amplification and replication across the entire small business landscape for us to really get to grips with the issues.
Posted by Toby Chance at 23:59 No comments:

This morning I read in Business Day (see here) that Gauteng plans to inject 30% of its R90 billion five year budget into its townships. But how, one wonders? This is an enormous amount of money but I am yet to see any detailed plan.

The ANC Government is yet again showing that when it comes to fulfilling its own promises it falls woefully short.

In October last year I attended the Township Revitalisation Summit at Orlando Stadium, Soweto. This was supposedly the culmination of months of consultations by the Gauteng government, and MEC Lebogang Maile in particular, where they were hearing about challenges black-owned businesses faced in Gauteng’s townships.

The Summit was all huff and puff, with Deputy President Cyril Ramaphosa, Gauteng Premier David Makhura, MEC Maile and Minister of Small Business Development Lindiwe Zulu all pitching in with promise after promise. 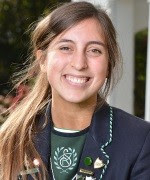 The motion is set out below, as well as a fuller account of her musical background.

I met Joanie for the second time after singing evensong on August 2nd at St George's Church, Parktown, Johannesburg where she performed some exquisite solos. She blew everyone away, and I have never seen the church as packed for an evensong as it was then.


What I did not tell Joanie was that I first met her at my good friend JP Landman's 60th birthday at the Cape Town club in June where she performed to the delight of the 50-or-so guests. She really is a remarkable talent and I am sure we will see a lot more of her in the years to come.