Business Day has published my letter today calling on Minister Lindiwe Zulu to re-enter the debate on labour reform, among other things.

You can read here at BDLive or in full below:

For Minister Lindiwe Zulu to earn the moniker “driver of change” (Drivers of change must pull together to restart economy, Peter Attard Montalto, 24 November) she first needs to do the following:

1.      Re-enter the debate on labour reform. Shortly after her appointment as Small Business Minister she made some sensible comments about how business was put off hiring because of restrictive labour legislation. After Cosatu took her out at the knees, she has not ventured into that territory again.
2.      Related to this, she should support Herman Mashaba’s bid to have the Constitutional Court reform Section 32 of the Labour Relations Act which mandates the Minister of Labour to extend agreements concluded by sector bargaining councils to non-parties to these agreements.
3.      Advocate tax and regulatory reforms to allow small  businesses to focus on growth rather than grapple with burdensome and punitive red tape and disincentives.

Xenophobia must be recognised as a hate crime - speech in Parliament

"Xenophobia must be recognised as a hate crime"

Honourable Members, this report is a curate’s egg – good in parts but in others it leaves a lot to be desired.

The Committee was unanimous in attributing the main causes of the violence against foreign nationals between January and May this year to socio-economic factors and wanton criminality. But it failed to attribute much of the violent incidents to xenophobic prejudice.

It is a fact that competition for scarce resources in our townships, cities and rural areas, is intense. Jobs are hard to come by and immigrants invariably are more willing to accept lower wages and longer working hours than locals.
Read more »
Posted by Toby Chance at 06:28 No comments:

Towards an inclusive economy 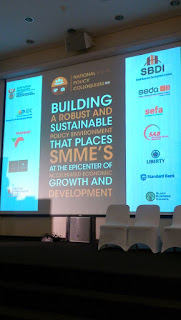 The word that comes to mind in summing up the colloquium presentations and deliberations is exclusion.

Small businesses, especially those in the informal sector, have long been excluded from the mainstream economy. Introducing the Colloquium, Xolani Qubeka, CEO of the SBDI, spoke of the first and second economies, language first used by former President Thabo Mbeki describing South Africa’s dual economy - “one developed and globally connected and another localised and informal, display(ing) many features of a global system of apartheid”.

Mbeki, speaking at the 62nd Session of the UN Security Council in 2007, suggested this was not just a South African phenomenon but a feature of the global economic system.
Read more »
Posted by Toby Chance at 04:01 No comments:

Almost exactly a year ago I spoke at this podium about the excessive time it had taken the newly formed Department of Small Business Development to organise itself and begin to do its work.

Motion moved in Parliament on enterprise and supplier development

Yesterday I moved the following Motion in the House of Assembly:

"I hereby move on behalf of the Democratic Alliance that at its next sitting, this House debates the contribution enterprise and supplier development can make to create a more inclusive economy in South Africa, that broadens the benefits of economic growth to previously excluded sectors and communities."

Small businesses, particularly black-owned ones, cite difficulties in accessing markets as their biggest challenge, followed by access to finance.

If corporate South Africa were to take enterprise and supplier development seriously we could make a real dent into both these problems simultaneously,
Posted by Toby Chance at 23:16 No comments:

An invitation has gone out to attend the Chance Glassworks - Everybody's Story - launch event on November 24th (see my previous post for info on the UK Lottery funding announcement). Sadly I won't be able to attend but I hope some of my readers will make it.

Details of the launch, and links to videos and other articles on Chance Brothers, can be found here.

History West Midlands magazine has done much to revive interest in Chance Brothers, as well as the history of "the people of the West Midlands, their ideas, innovation and industry."

There is a connection between the magazine and South Africa - publisher Mike Gibbs is a regular visitor to and dedicated supporter of Gansbaai in the Overberg region of the Southern Cape.

The town, close to Danger Point where a Chance Brothers lens was installed in the newly erected lighthouse in 1895, is a mecca for whale-watching, shark-diving and the launch point for visitors to Dyer Island, breeding ground for tens of thousands of the endangered African Penguin.

The lighthouse was placed close to the site where the HMS Birkenhead went down forty three years earlier - a notorious shipwreck which gave birth to the naval drill of "women and children first." You can read about it here.

Well done to Mike for all your endeavours!

I have just been forwarded this article which appeared in yesterday's Birmingham Post: 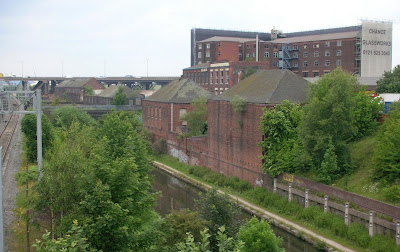 Historic former glassworks in the Black Country which supplied windows for the Houses of Parliament will be the subject of an in-depth research project to discover more about its impact on the area.

A grant of £48,200 has been awarded by the Heritage Lottery Fund to Birmingham-based built environment charity Made to examine the history of the Chance Brothers Glassworks in Smethwick.

Made will oversee the 18-month project which will look at the impact of the Grade II factory on the region as well as investigating its national and international reach.


Another sign that public interest in Chance Brothers continues to grow year by year.
Posted by Toby Chance at 01:51 No comments: