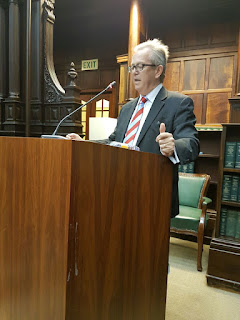 Our whips, John Steenhuisen and Ian Ollis, objected to this outrageous ruling and for a few minutes the House descended into a state of mild chaos as the Chair tried to regain control of proceedings.

While this was going on I conceived a plan to wiggle out of the mess while poking fun at Minister Zulu. Judging by her glum expression and response in wrapping up the debate, she was not amused.

In fact, she declared she was very visible because she was black! It is unfortunate that Minister Zulu should resort to racial stereotyping to try to make a point. She has being doing this more and more lately - she used it when defending her hiring of Dr Thami Mazwai as her special advisor whom I had accused of a conflict of interest in also being a supplier of services to the Department. She asked why the DA only accused blacks of being corrupt!

The ANC has got to get over its obsession with race. Truth is, it's hit rock bottom and can't think of any other way of attacking us.

Before I continue let me congratulate and welcome our new Deputy Minister, Honourable November, to her position. We wish you well in your important endeavours. And a hearty welcome to all the guests upstairs in the gallery.

Chair, it is now abundantly clear, three years after the Department of Small Business Development was formed, that it is invisible to 97% of businesses in South Africa.

Let me repeat that. The Department of Small Business Development is invisible to 97% of businesses in South Africa.

How can I so confidently make that assertion?

Opinion piece in the 2016 GEM report on South Africa

The Global Entrepreneurship Monitor has just published its 2016 report on South Africa. I was one of four guest contributors of an opinion piece carried in the report, which I reproduce below.

There is a growing voice of disagreement on the methodology, findings and policy implications of the GEM report versus the Global Entrepreneurship Index. The former focuses on the Total Entrepreneurial Activity Rate which equates a high number with positive economic activity while the latter prefers to look at the relationship between fast-growing businesses and a country's prosperity.

This is an important discussion which raises very big issues around priorities for boosting economic growth. I will be examining this in the months to come.

South Africa is under-achieving but can do better if we follow lessons from pockets of success.


Among South Africa’s great paradoxes is that we have by far the most advanced economy on the continent of Africa yet one of the lowest rates of entrepreneurial activity. We have been bumping along the bottom of country rankings ever since GEM started in 2001. Hence the question posed in this report: can the small business sector in South Africa be saved?

In short, yes, with the right policies and the right interventions by government and the private sector, then South Africa’s small business sector can be the catalyst for growth in our country.
Read more »
Posted by Toby Chance at 02:53 No comments:

Letter to Business Day on the pitfalls of micro loans

Today's Business Day carries my letter about the pitfalls of micro loans for small businesses. You can read the letter here or the full version I sent them below.

Mark Barnes must realise he is taking Postbank into treacherous waters (Postbank's fresh loan plan aims to boost access, BDay 28 April). While access to credit for informal sector businesses, in the form of micro loans, is touted as promoting financial inclusion, it has more often than not led to over-indebtedness and financial distress among borrowers and boom-bust times for credit providers.
Read more »
Posted by Toby Chance at 01:53 No comments: