Campaigning in Sandton and Alex 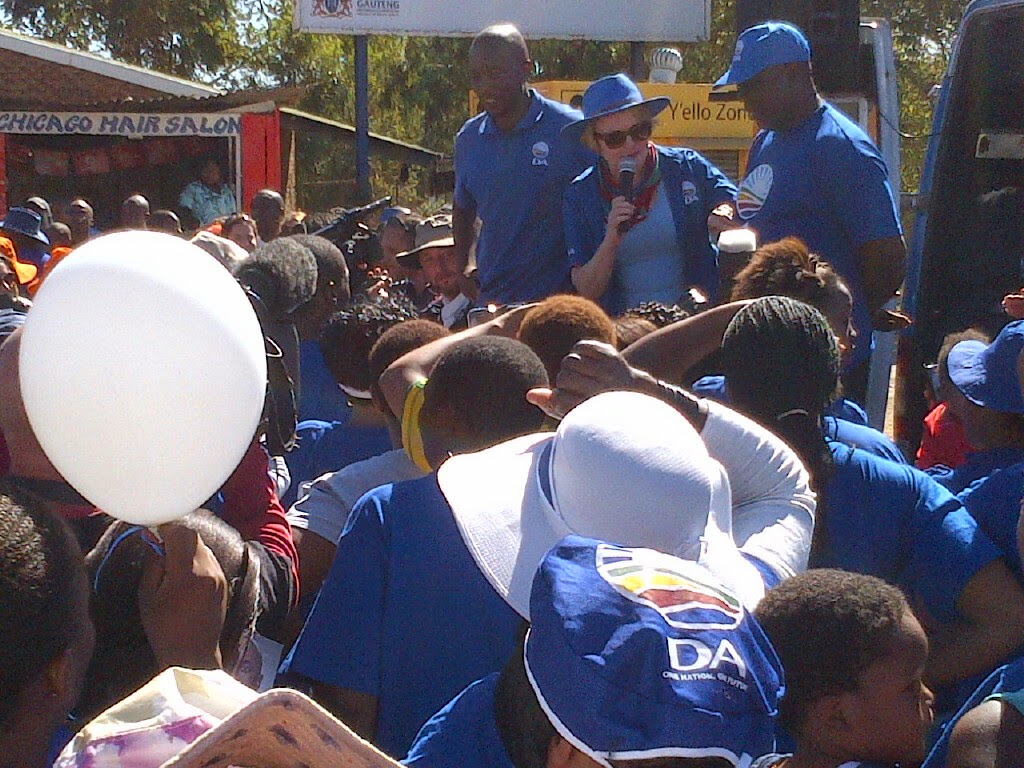 Today the Sandton constituency hired a bus to drive around Sandton and Alexandra township canvassing support for the DA. We rendezvoused with Helen ZIlle and Mmusi Maimane who were in Alex for a couple of hours. Here are some pics and a video of the scenes we encountered.

ANC jobbery on display in Sandton

Yesterday's Business Day carried a short but vivid leading article from the Financial Times on South Africa's twenty years of democracy under the headline "SA's dream not yet fulfilled". It contained the sentence "The ANC is a coalition held together by little more than jobbery." Jobbery is not a word we see often in South African writing. The Google definition is "the practice of using a public office or position of trust for one's own gain or advantage". Nothing could demonstrate the truth of this better than last night's ANC manifesto "Endorsement" shindig at the Sandton Convention Centre.
Read more »
Posted by Toby Chance at 06:49 No comments:

My letter to Business Day was published today:


SIR – Does economic growth lead to greater equality or inequality? According to Thomas Piketty in his book Capital in the Twenty-first Century it’s the latter. David le Page would seem to agree (The value of an endlessly expanding GDP is doubtful).

Johannesburg Theatre is putting on four showings of this production, timed to coincide with the twentieth anniversary of our first democratic elections which took place on April 27th 1994. Diana and I were invited to the first show on Thursday night and we were bowled over. It was simply superb and brought back many memories of that eventful day. 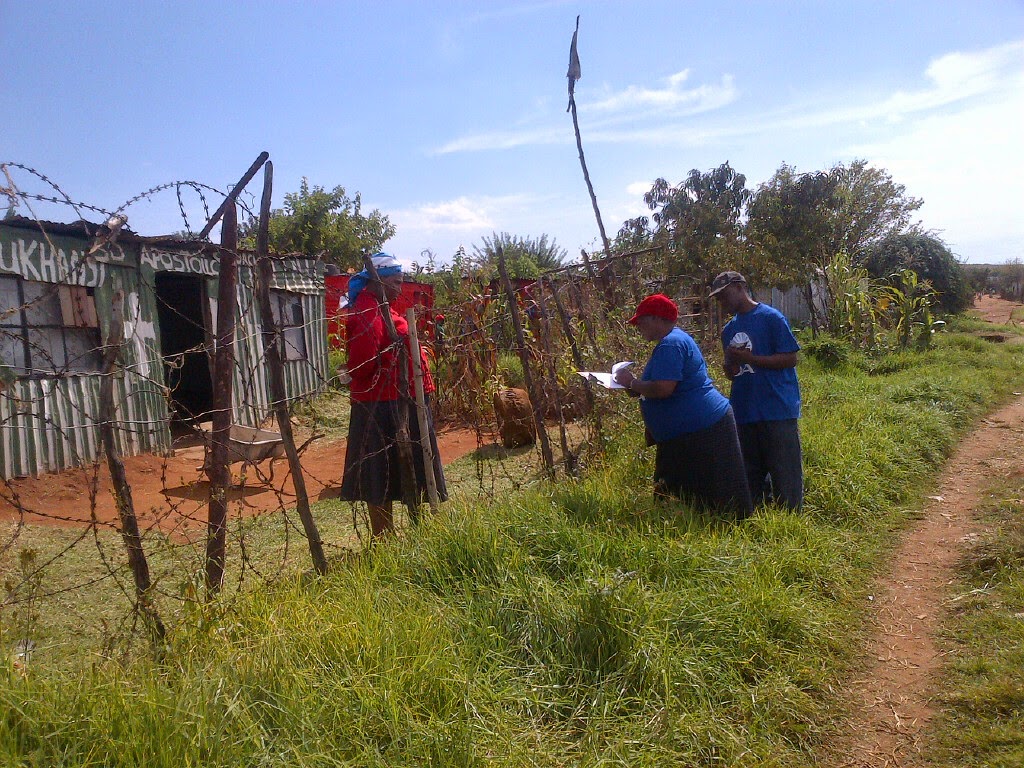 This morning I joined Masesi Sekolo and her team of activists in Snake Park, part of Doornkop Extension 4 in the far western extremities of Soweto. I didn't know what to expect, having never been there before. What I found was both depressing and uplifting, a tribute to the human spirit and our unending quest for dignity whatever challenges our circumstances throw at us. A dedicated group of DA activists walking from shack to shack collecting names, phone numbers, ID numbers and other details which will be added to the party's Voter Registration Management System which enable us to keep track of our supporters. Two hours work and we'd added over 200 names, and this in an informal settlement which has been ANC territory for ever.

On Wednesday evening my wife, Diana Lucas, and I were guests at the Nelson Mandela Centre of Memory in Houghton, Johannesburg, where the film 1994 - The Bloody Miracle was premiered. We were on the guest list because of Diana's biographical work on Nelson Mandela, including her tribute screened on MNET after his death. How fortunate we were, in the presence not just of the filmmakers but of some of the perpetrators, and victims, of horrendous violence and mayhem that threatened the Rainbow Nation with a still birth.
Read more »
Posted by Toby Chance at 01:52 1 comment: 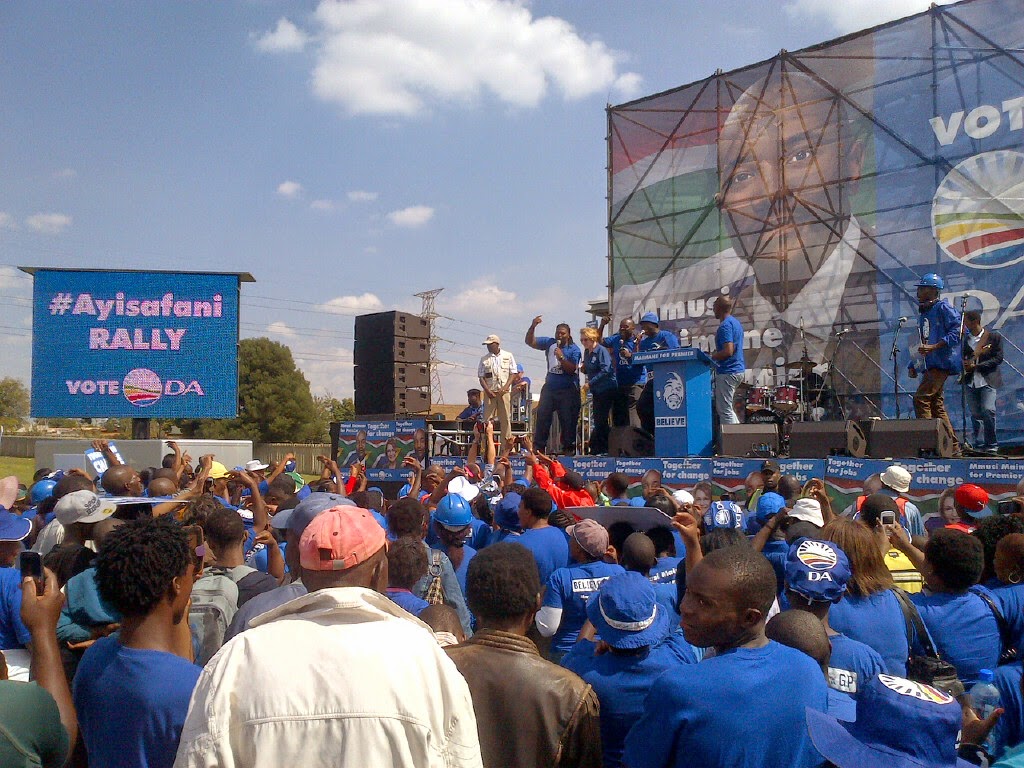 A new ministry for small business? Now we are getting somewhere. Perhaps. 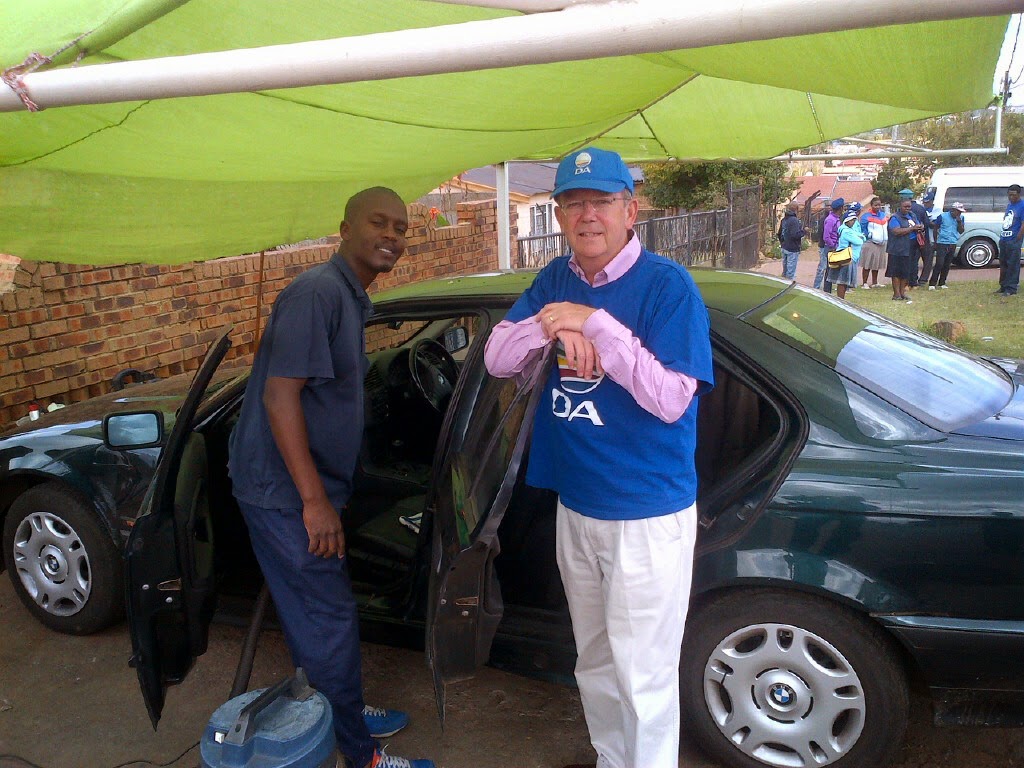 ANC Secretary General Gwede Mantashe has floated the idea of a new ministry for small business in the government to be formed after the May elections. Under the headline "Mantashe stokes hopes for small business ministry", Business Day reported Mantashe raising the matter at a SA Chamber of Commerce and Industry business breakfast in Johannesburg. This follows his first mention of the idea back in February. If the ANC is serious, the question then is, can they make the new ministry effective?

Postscript - a former Dragon on the BBC's popular Dragons Den agrees with me - check this out.

The plight of the Soweto Homemakers community - Part 3

So the meeting called by the ward councillor took place yesterday evening. Advertised as a Ward Public Meeting Ward 37 (Region D2), Councillor Zodwa Nxumalo Kindly invites all the Residents of Ward 37 to a meeting to be held as follows:......Mavis Hall.... Agenda includes 2. Jabavu stadium development.(Resume). The leaflet's footer included the coat of arms of the Office of Speaker of Johannesburg and the Joburg logo. All very efficient, I reckoned, shouldn't be any problem. I should have been so lucky!

The plight of the Soweto Homemakers community - Part 2 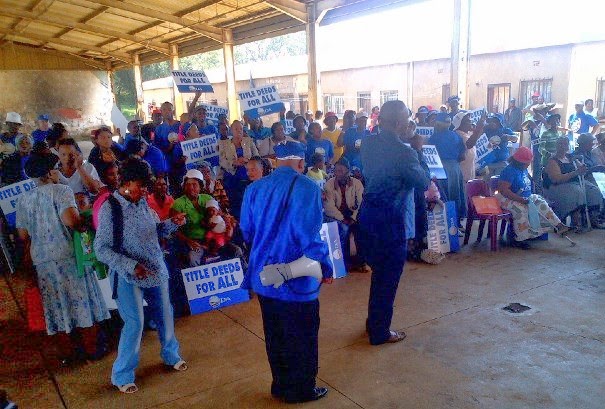 On Monday, the day after the DA launched its Gauteng election manifesto, Mmusi Maimane, DA Premier candidate for Gauteng, came to Jabavu in Soweto to launch an important plank of the manifesto. It focuses on the need to issue title deeds to occupants of state-subsidised housing. As I outlined in my previous post, many of the residents at Soweto Homemakers have lived there for over twenty years not just without title deeds, but under the constant threat of eviction. The DA's policy on title deeds could change this, improving the lives of several hundreds of people in a matter of months. But will the ANC listen?