This week's Financial Mail gives a strong thumbs up to the DA's economic policy, in its lengthy cover story by economics writer Claire Bisseker.

In her article she quotes Lumkile Mondi, who chaired the panel discussion I sat on at the SBI Indaba two weeks ago.

"Wits economics lecturer Lumkile Mondi chaired a recent panel discussion organised by the Small Business Institute in which the main parties were invited to present their policies for supporting the SME sector.

In Mondi’s view, the ANC "disadvantaged itself" by being unable to say what it would do differently, while the EFF offered no policies of its own and simply claimed it would do a better job of implementing the ANC’s if it were in power.

The DA had "a very good story to tell", however, based on its approach of boosting SMEs through deregulation."

I must say I am chuffed to have got his approval for my comments.

"...the DA would improve the operating environment for small firms by ensuring government departments pay them in 21 days, not the current 30. It would also exempt SMEs from most labour and employment equity legislation, reduce red tape and return to sector-specific minimum wages with a new minimum floor of R1,780 a month. "We need a recalibration of the power relationship between big unions and small businesses," says Hill-Lewis. "Shop-floor strike ballots should be mandatory and bargaining council agreements should not be imposed on small businesses which are not represented. These two reforms alone would go a long way in forcing the two towards a better working relationship."

The DA's policy on small business outlined in our manifesto has won the approval of most commentators. I am proud to have played a significant hand in writing it.

Yesterday's online version of Business Day publishes my letter about rampant corruption in the Department of Small Business Development. It seems corruption is now everywhere. People laud Minister Rob Davies for his sound management of the Department of Trade and Industry which he has run since 2009 but under his watch corruption has spread like a cancer and Minister Zulu has done nothing to stop it after inheriting the "small bits" of the DTI when her department was set up in 2014.

Until now. Last month she suspended nine officials on the strength of an Auditor General's report, and I hope this will be just the start of a cleanup process to root out corruption entirely.

You can read the letter here or below for non-subscribers to BusinessLive.

Questions to Ministers, both written and oral, are an excellent way to extract information from the executive they are reluctant to reveal through other means.

See how taxpayers' money is spent by one such minister, Lindiwe Zulu, Minister of Small Business Development. The air travel costs alone amounted to R1,3 million for 12 trips, some of which were paid for by the host country/organisation. That's over R100 000 per trip.

The DA has been pressing for the Ministerial Handbook to be amended to minimise expenditure by the executive. Finance Minister Tito Mboweni might be forced to listen as a cost-cutting exercise will soon become mandatory, due to the government's coffers running dry. 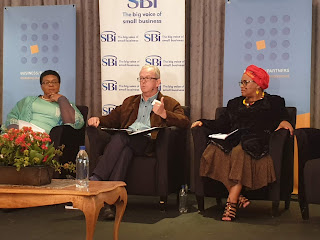 On Thursday 11th April I participated in a debate with the ANC and EFF on our election manifestos. It was part of the Small Business Institute SME Indaba held at the Bryanston Country Club.

My counterparts were ANC MP Ruth Bhengu, Chair of Parliament's Portfolio Committee on Small Business Development and a colleague of mine for the past 5 years on this committee; and Mandisa Mashego, Chair of the EFF in Gauteng. It was moderated by economist, commentator and SBI director, Lumkile Mondi.