Contents of the old oak chest revealed - Part 2: the meeting with Adolf Hitler

Roger and Mary Chance, my grandparents, spent the winter months and early spring of 1934 in Hindelang in the Bavarian Alps. They were drawn by the reputation of the local quack, Professor Franz Gerl, who seemed to have some success treating Mary's thyroid trouble. There they got to know another of Gerl's patients, Rudolf Hess, with whom Roger spent many hours discussing Hitler's intentions for Europe.

In May they returned home to Hampstead, London, where Roger wrote an article for the Fortnightly Review, Does Germany mean war? Attempting to give a 'fair' judgement, the article was translated to German and reprinted (apparently with the critical paragraphs edited out), attaining a wide readership in literary and political circles. 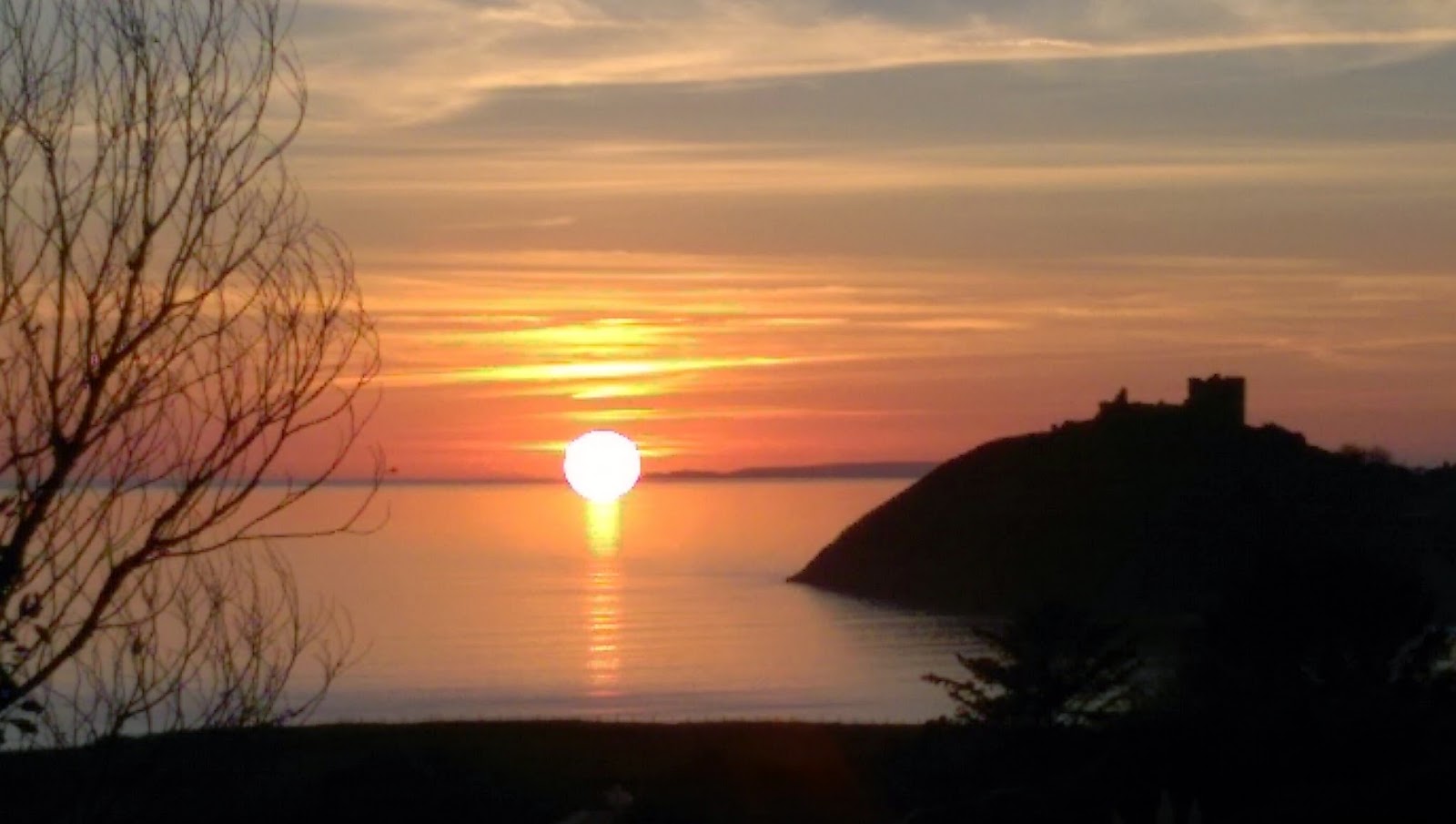 Diana and I are staying with my parents in their lovely home in Criccieth, north Wales. I'm in the sitting room with a stunning view of the sunrise, looking out over Tremadog Bay towards the Rhinog mountains. Yesterday we took a drive around Snowdonia National Park, lunching in Beddgelert before returning at dusk to see this amazing sunset, silhouetting Criccieth castle which was built in the 1300s. This is a beautiful but little known part of Britain. My mother's parents built a holiday home not far from here in the 1930s which we visited every summer when I was growing up. When my father took early retirement in 1978 he and my mother moved to the farm Rhosgyll Fawr (meaning big rough pasture) which they'd bought some years earlier and restored to working order. Finally they settled in the town, building themselves this house where they are seeing out their closing years.

Yesterday I paid a flying visit to the Cape Town Summer Market, which opened in the Company's Garden on Saturday and runs until the 30th (excl Christmas Day). It had both a professional and a personal purpose - the market is an important annual event in the calendar of over 200 informal traders, mainly from the Cape Flats, who make up part of my small business constituency; and it was a trip down memory lane, as I was part of the team that organised the market in 2012 and 2013 and I wanted to re-connect with many people who had become friends in the process. I spent a very enjoyable five hours wandering through the Garden as the traders set up their stalls. The treacherous south-easter wasn't blowing and the air was warm, perfect conditions in fact, with the breath-taking setting under Table Mountain making this a popular destination for Capetonians and tourists alike.

So what is a job, and how do we create more of them?

This article appears as an OpEd in Business Report - Cape Times and The Star - this morning. 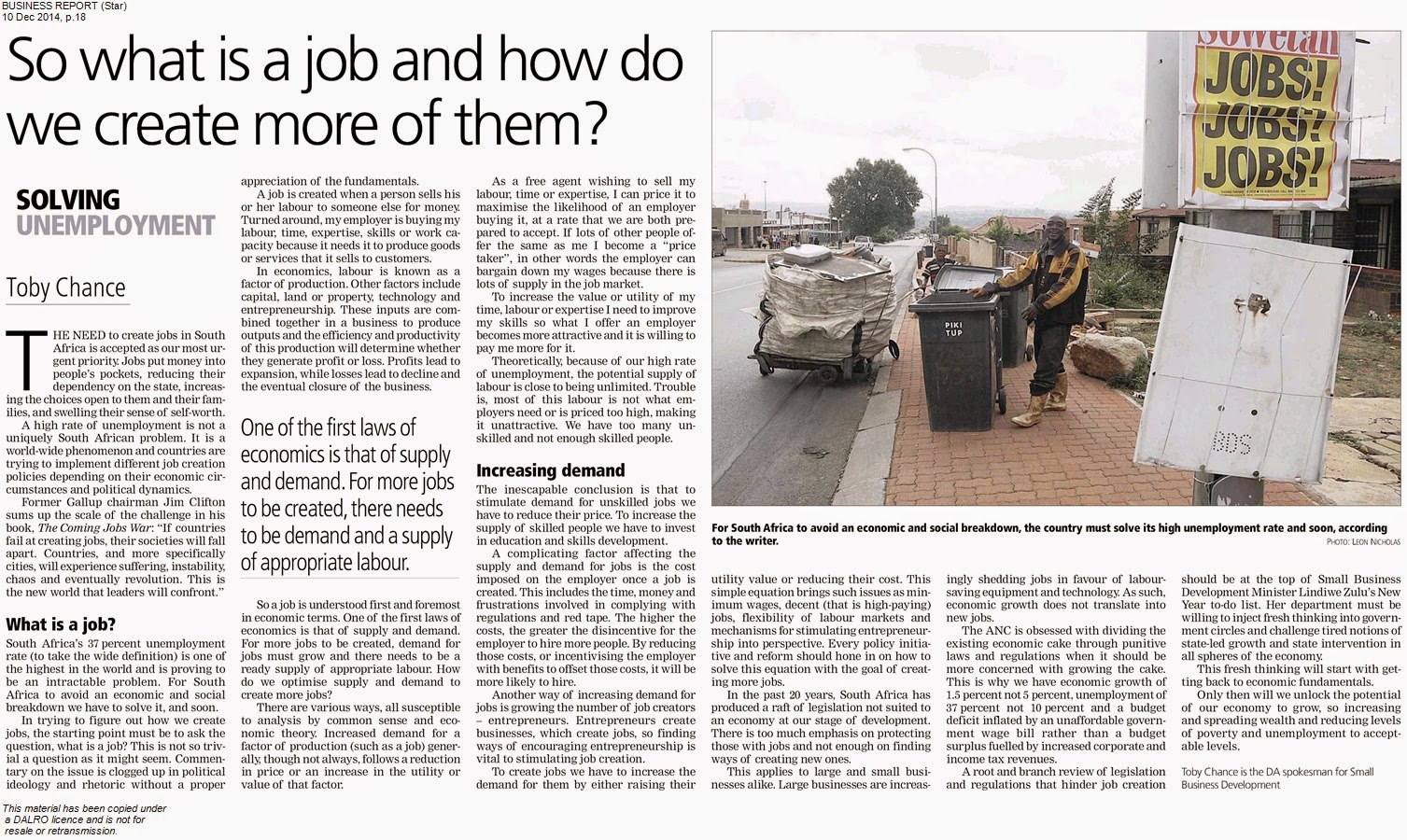 The need to create jobs in South Africa is accepted as our most urgent priority. Jobs put money into people’s pockets, reduce their dependency on the state, increase the choices open to them and their families and swell their sense of self-worth.

In 1972 the lights went off in Britain. The showdown between the National Union of Mineworkers and Edward Heath's Conservative government led to rolling electricity blackouts, the three day working week and general misery for millions of people. I well remember poking at my dinner plate in the dim school dining room candlelight, wondering how a supposedly modern country could hit such a low. Now, 42 years later, I am beset with the same thoughts.