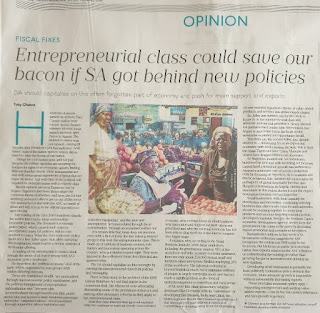 
Hundreds of people turned up at Hyde Park Corner mall to hear Mcebisi Jonas launch his book After Dawn in August. The allusion to dawn was not missed, coming eighteen months after President Cyril Ramaphosa’s ‘New Dawn’ state of the nation speech which did so much to raise the hopes of our nation.

Things are a lot darker now, and not just because the ratings agencies are scouring the horizon for signs of an economic upturn, finding little but thunder clouds. Their assessments are met with determined statements of intent that we must “do better” but with little of the political will required to underpin hopes with a realistic plan.


Recent opinion pieces in Business Day by Shawn Hagedorn and Peter Bruce share the common theme of whether, and how, the DA has anything serious to offer to get us out of this mess. The assumption is that with the ANC so bereft of ideas and will, it is up to the official opposition to save the day.

Any reading of the DA’s 2019 manifesto dispels the notion that it lacks ideas and sensible economic policies. The Treasury’s economic policy paper which caused such a storm incorporated many DA policies but no-one seemed to notice.

What the DA’s economic policy lacks are a few ‘killer apps” which, after capturing the imagination, will lead to a deeper analysis of its broader offering.

A reading of Jonas’ introduction reveals the seeds of all that is wrong with SA’s economic policy landscape. He describes the ‘political-economy’ deal of the early 1990s, negotiated by four groups with widely differing interests.

It is remarkable that Jonas does not mention, even with a hint of irony, the key missing interest group in this deal – the entrepreneurial class. This is made up of millions of business owners, sole traders and innovators, operating across our country, who are hidden in plain sight. They were ignored in the settlement Jonas describes and are ignored today. The DA should capitalise on this oversight by owning the entrepreneurial class in its policies and messaging.

There is deep irony in the fact that the architect of the 1995 Labour Relations Act and lead player in the consensus deal, Tito Mboweni, is now advocating dismantling many of the provisions of that act and other necessary reforms as they apply to the entrepreneurial class.

That this class interest was ignored explains why we continue to have an overly-concentrated economy, why red tape bedevils small business, why innovation and support for start-ups are not prioritised and why the informal economy has not been able to drag itself out of the kasi to compete on a bigger stage.

It explains why, according to the Small Business Institute, 1 000 large employers, including government, employ 56% of the workforce and why, contrary to earlier estimates, there are only around 250 000 formal SMEs employing 28% of the workforce. The informal economy is beyond statistical reach but it maintains millions of people in largely survivalist mode and has not made a significant dent on the levels of under-development in our townships and rural areas.

If SA were like other economies, whether developed like Germany with its “mittelstand” or developing like Rwanda, India and China, the SME segment would have soaked up millions of our unemployed, paid billions in taxes and contributed to a swing away from SA depending on raw material exports to exports of value-added products and services into global supply chains.

So, killer app number one for the DA is to home in on the entrepreneurial class and advocate policies which prioritise it. John Steenhuisen has begun to appreciate this in his focus on the enterprise economy and opportunity for all.

This links into the second killer app, already alluded to – developing SA as an export-led economy with SMEs leading the way. This is how the Asian Tigers and later China, Vietnam and others have dragged billions out of poverty.

As Shawn Hagedorn pointed out, South African consumers, burdened by debt and with declining net incomes, can't fund a sustained growth rate sufficient to support a noticeable rate of poverty reduction. Only by focusing on exports to rich countries will this be achieved. Sub-Saharan Africa accounts for perhaps 1% of global disposable income, and Shoprite’s downsizing in Angola, Zambia and elsewhere in this region shows it’s not the export destination bonanza we had hoped for.

Small businesses, with their capacity for nimbleness and innovation, combining with big business which offer scale, capacity and networks, should be working together to create new products and services targeting markets in rich, developed countries. Wesgro, the Western Cape’s economic development agency, shows how government can come to the party by providing export promotion and investment incentives.

President Ramaphosa’s address to the SA investment conference on Thursday suggests the ANC recognises the central role SMEs play in the economy. But his focus on public procurement rather than exports reinforces the ANC’s fixation on redistributing the existing pie rather than growing the pie by innovation and opening up new markets.