Keepers of the Light - new book and film on Portland Bill lighthouse, Dorset 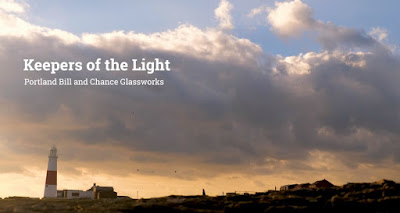 Two artists from the West Midlands, Brendan Jackson and Geoff Broadway, recently launched their book and film about the construction of the Portland Bill lighthouse on the Dorset coast in England.

They are magnificent works of art in themselves, portraying how the firm of Chance Brothers built a global business on lighthouse design, construction, installation, commissioning and maintenance which lasted for over 100 years.

The firm was founded by my great great uncle Robert Lucas Chance in 1824 and a few years later he recruited his nephew, my great great grandfather, James Timmins Chance, who had recently graduated as a top scholar in mathematics from Trinity College, Cambridge.

James went to work in the optical glass department as well as improving the process for grinding and  polishing sheet glass, which enabled the firm to win the contract to glaze the Crystal Palace which housed the 1851 Great Exhibition.

Chance Brothers exhibited their first lighthouse lens here, overseen by James Chance who for the next forty years dedicated his life and talents to protecting seafarers around the world and established Chance Brothers as the leading lighthouse engineering company in the world. For these services he was created a baronet by Queen Victoria in 1900.

All of this, and more, is described in my book, Lighthouses, The race to illuminate the world, published in 2008 which you can read about on my website. Copies of the book can still be picked up on Amazon and other auction sites. 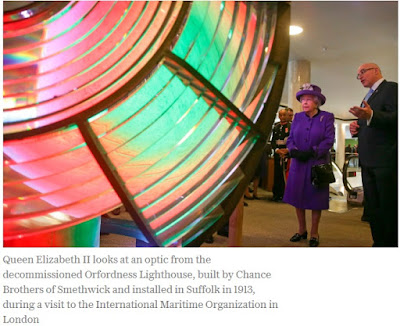 Since writing the book I have been fortunate to be associated with the Chance Heritage Trust, established in 2014 to preserve and redevelop the old factory site in Smethwick in the West Midlands. I am currently the Ambassador of the Trust and do occasional interviews and other things to promote its
work. 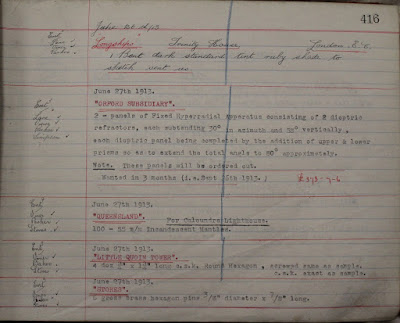 This evening I am doing a Skype call with a journalist from the BBC on another lighthouse - Orford Ness in Suffolk, which is the subject of a documentary in the making. In March 2018 Queen Elizabeth visited the International Maritime Museum in London where she saw the original hyper-radial Chance Brothers lens from Orford Ness, built in 1913 and recently decommissioned. Photograph courtesy of the Daily Telegraph.

A local designer and art historian, David Encill, who has published a series of books on Chance tableware and is busy writing his magnum opus on the history of Chance Brothers, found this record of the Orford Ness lens order in the Chance archive in Smethwick. Above it you will see another order, for the Longships lighthouse, one of the most famous to be found along the English coastline. There is also reference to lenses destined for Queensland, Australia and Little Quoin Point in Oman, further indication of the globalised nature of Chance Brothers' lighthouse business.
Posted by Toby Chance at 23:07